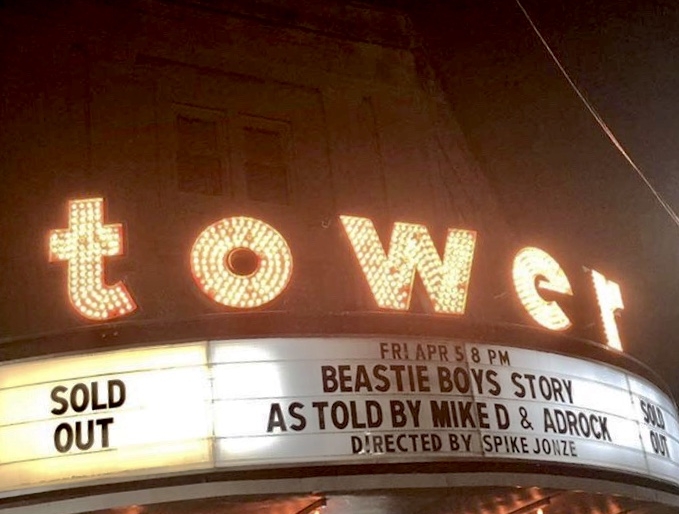 Beastie Boys Story is long, funny, and poignant, but still…

Did you ever have mixed feelings about a show as you were watching it, but couldn’t leave because much of it is your story?  Or the story of your friends from the 70s through the 90s, and is poignant, and often hilarious…and there’s this curiosity as to how this thing plays out despite occasional long dull lulls, unrehearsed awkwardness and frustrating hints that somebody wants to break out in song? Or rap? And of course you adore the performers on stage for the art they made and they men they became? And then Jonah Hill and Tim Meadows — the latter playing Bob Dylan at a party — stopped by?

Welcome to my review of Beastie Boys Story on Friday night at the Tower. As directed and filmed by their old pal and “Sabotage” director Spike Jonze for an unspecified film project, the Upper Darby gig always moved and felt like more of a soft opening for the upcoming Brooklyn shows — all developed, in part, as an audio/visual accompaniment to their autobiographical best seller Beastie Boys Book. Then again, as recounted toward Show’s finale by a now-grey-haired Adam “Ad-Rock” Horovitz, he and Michael “Mike D” Diamond had not been on stage together as Beasties since “the last gig” at Bonnaroo, before the death of their beloved friend, band starter and force-for-good, Adam “MCA” Yauch seven years ago.

The three “stopped being a band” after Yauch’s passing, and nothing has or was ever going to get the two surviving Boys to rap holy Beasties tracks again — even if, at (many) times during last night’s production, you could feel Ad-Rock and Mike D ready to leap into their old poses and usual frat-boy-become-enlightened-male rhymes. You had to even wonder if it wasn’t a cruel tease on their part, watching and listening to the Beasties speaking their lyrics while the dense boom bap of Rick Rubin (License to Ill) or the Blaxploitative sampladelica of The Dust Brothers (Paul’s Boutique) pumped behind them.

Then again, that’s the sort of behavior, or prank, that Yauch would have reveled in (e.g. Ad-Rock’s tale of the 15-year-long practical joke played on him by MCA) or railed against as spirituality, feminine empowerment and overall maturity became his mien.

Which reminds me. The one thing that kept coming up during the show’s first half is how much of the boorishness behind the Beasties pre-enlightenment period may have all been the fault of Rubin and their interest-conflicted manager / label boss Russell Simmons. It was absolutely right of the onstage-Beasties to acknowledge the current sexual harassment and rape charges against Simmons (Mike D did a really accurate, and somewhat mean impersonation of the Def Jam giant) AND the fact that, without him and uber-producer Rubin’s partnership, the Beasties might’ve remained little more than Brooklyn hardcore punk kids with a groove. Yet, they put the blame for much of their past bad behavior on being egged on by Def Jam’s dynamic duo, and kept apologizing for who they were (defiantly misogynistic for a time), perhaps, because of Simmons and Rubin.

An apology for being an asshole is always absolutely warranted, necessary and demanded — #MeToo or not — but pulling the devil-made-me-do-it routine seemed like a weird out for the older-but-wiser Horowitz and Diamond, particularly as they portrayed Yauch’s latter-day pro-feminine lyrics as being so inspirational to who they would be as men and artists. That maybe the Beasties hadn’t exactly grown up, as much as they had — in the words of Horowitz — “wised up”? That’s fine. But, maybe they should have owned up too.

So, the red sweater-wearing Diamond and the sweatshirt-donning Horowitz were fast, footloose and funny while talking about the New York City / Brooklyn boroughs they grew up in, became Clash-loving hardcore punks in, and found Roland drum machines in. The adventures of coming up fast as middle class Caucasian kids snot-nosing their way through African-American hip-hop culture was an education for some who hardly realized the Beasties’ pre-success roots. Several stories about hanging out with Aerosmith and Run DMC (who they justifiably idolize and enthuse over) and belly-laughable. So was their spoken exploits about hanging out in Los Angeles, spending too much money, and wearing a fashion doyenne’s couture outfits to Dolly Parton’s birthday party (wait for the video). They are both natural storytellers, at ease on stage being jovial chatty Beasties with dramatic arcs, rather than rapping Beasties.

Their tale of rising post-platinum success on the first album, to dismal falling failure with the second record (Paul’s Boutique sold zip upon release, despite the Beasties having full control, though it garnered cult-favorite status over the years) was pragmatic, blindingly real and weirdly humorous. How they pulled themselves up with hard work and Yauch’s Buddhist / humanist awakening was tender and victorious — like Rocky without anyone having to hit meat.

The show-and-tell of the Boys talking rhapsodically while old videos and torn photos unfurled behind them was nicely done — even if Jonze’s yelling out or alluding to Horowitz’s overused phrase “crazy shit” grew tedious. Then again, these are the jagged edges that the trio must iron out before Brooklyn and heavily edit before the film reaches whatever screens it is bound for. If the twosome had prepared their text / schtick better (they promised repeatedly that they had rehearsed this many times), perhaps a quickened, sharper pace would have made Beasties Boys Story amazing, rather than just good-with-great flashes. Ahhhhhh, maybe in post. Fix it in the mix. Either way, I couldn’t be more pleased that I was there to witness such messy history, as I knew it and lived it well the first time around with them.