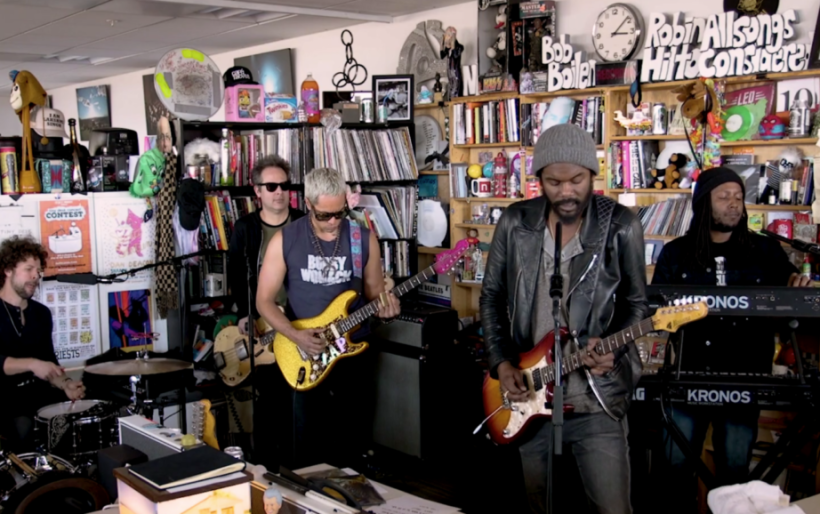 Blues-rock champion Gary Clark Jr. took on the NPR Tiny Desk stage this week with a dazzling, stripped back set. Behind the famous desk, Clark shared songs from his recent album, This Land, which reflect on the black experience in America after the 2016 election, as well as stories from his personal life. Clark chose to focus on the personal rather than the radical in this performance, but as NPR put it, “these songs still roared with the assurance and force of a showman at the top of his game.”

Clark’s band for this performance consisted of Eric Zapata (guitar/vocals), Johnny Bradley (bass/vocals), Johnny Radelat (drums/vocals), and Jon Deas (keys/vocals). The group opened with “What About Us,” a quintessentially blues-rock song with synth-y flair about forgotten communities. He followed up with “When I’m Gone”, a soulful jam about life as a father and touring musician, and “Pearl Cadillac”, a heartfelt tribute to his mother that tugs at an audience’s heartstrings on big and small stages alike.

Throughout the set, Clark jokes about being exhausted from taking his young son on tour with him, as well as his refusal to take off his heavy leather jacket because, as he puts it, “I feel sexy in this jacket, so I’ll sweat through it.” Perhaps the most striking moment of Clark’s performance was his extended guitar solo in “Pearl Cadillac.” Clark played to the upper register of his instrument, which matched his vocal falsetto throughout the song, and proved that even a slow song can be infused with vibrant sound.

Setlist:
“What About Us”
“When I’m Gone”
“Pearl Cadillac”