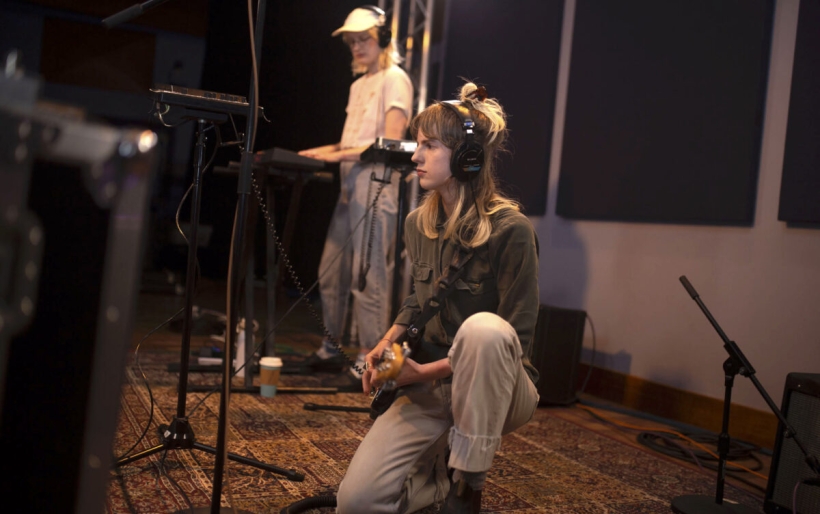 We weren’t even ten minutes into setting up for Empath‘s Key Studio Session this week and conversation had already shifted from record pressings and tour schedules to laser light shows and the prospect of finding one that works at a basement gig scale.

Which, for four people dubbed “2018’s trippiest punk band” by Rolling Stone, it’s not entirely surprising. On the one hand, the booming low end blasts from Randall Coon’s Moog bass synthesizer throw us back to the cutting indie-dance of The Faint, or earlier to the sheen 90s noise-popsters Stereolab, earlier still to 70s experimentalists Suicide, while singer-guitarist Catherine Elicson spends the outro of “Soft Shape” coaxing caustic squeals out of her instrument, feverishly picking way up the fretboard in a frenzy reminiscent of Sonic Youth and Versus. Empath is punk at heart, and when it wants to hit, it hits hard and unrelenting, choosing the path of vivid and visceral expression over a more approachable conventionality.

But listen to their performance of “Hanging Out of Cars,” another song from their new Active Listening: Night on Earth, and a spark of serenity enters the picture. The introductory minute and a half of warbling guitar, racing rhythms and lyrics about travel, freedom, and desire give way to an ambient expanse. For the next four minutes, we’re adrift in upper-register keyboard pulsations from Emily Shanahan, soft and subtle free-time beats by drummer Garrett Koloski, bubbling loops from Koon, waves of sound from Elicson, with an underbelly of windchimes, bird sounds, and a voice murmuring indistinctly. It’s peaceful without being overly pretty, a potent improvisation in the spirit of Pink Floyd at Pompeii, and an immersive experience for performers as much as the spectators. Watching from the mixing console, the phrase Active Listening clicked in a big way. I also realized that, yeah, they weren’t at all joking about those laser lights.

Empath is comprised of four friends from varied background who converged in a single West Philadelphia house in 2015. Shanahan and Koloski knew one another from attending college in Syracuse (the latter drummed for lo-fi faves Perfect Pussy), while Elicson got her start in the DIY scene of Columbus, Ohio, where she played in the band Goners. As their various projects ran their course, they collectively found a new home, and found one another. As the story goes, the 50th and Hazel housemates didn’t know too many people in Philly upon arrival, but they did know they enjoyed staying up late together, nerding out over Alice Coltrane and Pharoah Sanders records, and subsequently jamming in their basement in search of their own transcendant musical plane. A couple self-releases made their way onto Bandcamp in 2016, followed last year by two EPs on Get Better Records: the taut Liberating Guilt and Fear in March, and the free-flowing Environments single in July. (Their Key Session is rounded out by a performance of the latter’s beautifully strange “Polyfoam.”)

Active Listening lays out Empath’s vision on a broader canvas than its predecessors, but avoids attenuating its far-out reaches and rough edges the way others on the receiving end of “artist to know” accolades from national media might. The album is poppy and penetrating all at once, it’s still the product of a band rooted in friendship making the noisy weirdo rock music they want to hear — and as we hear in this performance, their live set pulls no punches either.

Below, watch Empath perform “Soft Shape” in WXPN Studios, and listen to a Soundcloud archive of their full session. The band heads out on a week-and-a-half tour with Sasami next month (dates below), with an album release party happening in Philly somewhere along the way, details TBD. Keep tabs on their Facebook page for announcements; Active Listening: Night on Earth is out May 3rd on Get Better Records, and you can grab a preorder here.