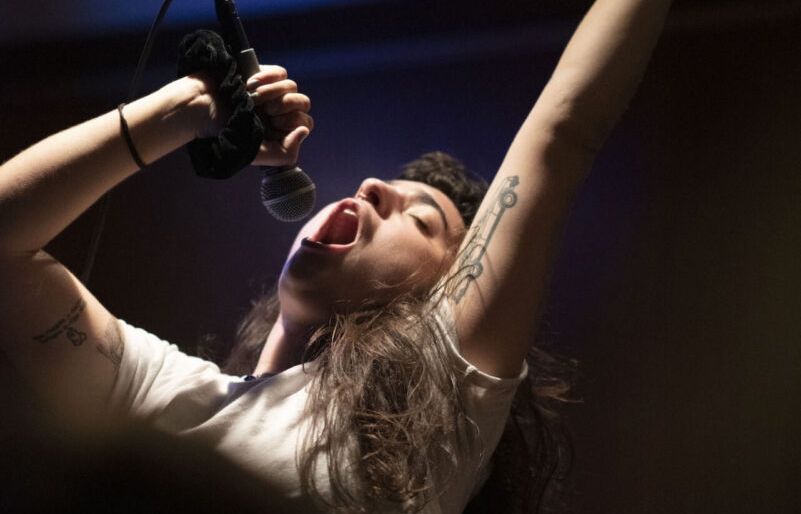 This past Saturday, Australian-bred band Camp Cope stopped at the Church for a sold-out show with Philly locals Thin Lips and New York’s Oceanator. Their set featured cameos from Kiley Lotz of Petal, members of Thin Lips, and Elise Okusami of Oceanator. Playing through most of their two LPs and throwing in a new solo song from frontperson Goergia Maq, there wasn’t a slow moment in their performance. Clearly having developed a dedicated following of their catchy, complex rock while also handling tough topics with their lyrics, the Melbourne three-piece showed off the power their songs have, even halfway across the world from their hometown.

Oceanator opened with riotous punk rock, by far the loudest group of the night (and that’s saying something). But their standout track was surprisingly tame, closing out on “Inhuman.” Thin Lips followed shortly after, launching into the single off 2018’s Chosen Family, “So Stoned,” and following up with other hits like, “South America” and “Gaslight Anthem (The Song Not The Band).” Chrissy Tashjian brings a lot of endurance to her songs live, belting out lyrics passionately and taking breaks only to captivate the audience with killer guitar riffs and solos. Kyle Pulley is also a pleasure to see live, his bass working perfectly in tandem with Tashjian’s guitar, and looking Cousin Itt-esque with his long hair head banging.

Thin Lips’ set felt all too short, but fortunately Camp Cope made up for it by bringing out Petal’s Kiley Lotz for their opening song “Keep Growing,” after a short rendition of Green Day’s “Warning.” Another amazing performer on stage, Kiley filled her silences with ecstatic dancing, a perfect facsimile of every audience member’s mood, and her backup vocals on the chorus worked in counterpoint with Maq’s lead (if you could hear either over the sound of every fan singing right back).

Continuing on to songs off their most recent LP, How to Socialise and Make Friends, including the title track and “The Face of God,” the latter a reflective, emotional account of sexual abuse in a relationship. Maq paused between songs to ask the straight, cisgendered men in the audience to speak with other straight cis men in their lives about the subject and educating each other about consent and boundaries, citing recent attacks in Australia against women. In “The Face of God,” Maq sings, “Could it be true? / You couldn’t do that to someone / Not you, nah your music is too good,” an all-too-real lyric for music fans.

Following up with some slightly deeper cuts off their self-titled debut, they prove their fearlessness in songwriting hasn’t changed over time, singing in “Jet Fuel Can’t Melt Steel Beams”:
The only thing that stops
A bad man with a gun
Is a good man with a gun
The lies they use to control you

After, Maq took the stage solo to perform and as-of-yet untitled track, filling the room with incredible vocals and electric guitar. Entering into the final songs of the show, the vocal section of Thin Lips joined Camp Cope to back up on “Flesh and Electricity.” After two more songs off Camp Cope, they closed out on “The Opener,” Maq handing off guitar to Elise Okusami of Oceanator to take the mic alone. Their most popular song for its amazing bass riff and vital message, it needed no encore.

Camp Cope balance important topics with excellent grooves, their songs bearing relisten upon relisten both because they’re so catchy, but also because they’re so incredibly poignant in their speech. Their show at First Unitarian only went to prove exactly how crucial bands like this are in any music scene. 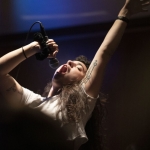