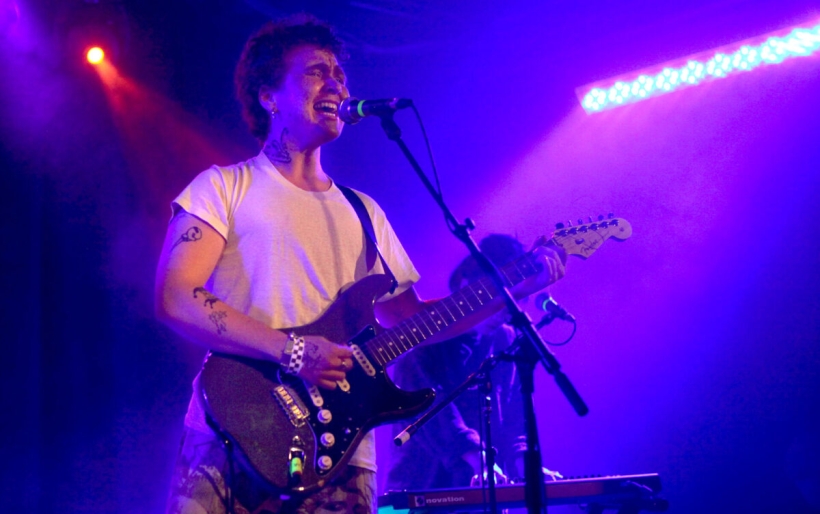 Cleo Tucker and Harmony Tividad of Girlpool have forever been an inseparable duo, inhabiting the world as two halves of a shared self. Their dynamic onstage is magnetic, the two gravitating constantly towards each other. On previous albums, everything was collaboration, but What Chaos Is Imaginary is divided into separately composed Tividad songs and Tucker songs, the two trading off on lead vocals. The work revolves around the pains of gradual personal growth, what it feels like to sever your past selves, and they brought those emotions to Underground Arts last week.

Shannen Moser brought a halo of warmth to the dim stage to start the show Friday night, accompanied by cellist Julia Peters. Moser has a classically rustic voice, her persona folksy and down-to-earth. She opened with “Haircut Song,” a tune that reverberates with an aching confession: “A broken heart will convince itself of many things / Like I need you, I need you, I need you, I need you.” Moser’s lyrics are arresting in their small details, kicking up the nostalgic dust of adolescence. She is, if nothing else, a storyteller. “This song is about a kid I rode the bus with, who would give me money to do weird stuff like lick things off the floor. I guess its lucrative, I’m too old for that now.”

Hatchie, led by Australian bassist and singer-songwriter Harriette Pilbeam, turned the energy up with their 80’s-influenced pop rock. Pilbeam’s voice was a silken dream on the infectious “Sure,” off debut EP Sugar & Spice. Windchimes and synths give the song a celestial aura, the lyrics departing from the typical spectrum of love songs. The singer was charming, cracking jokes at intervals. “We’re about mid-way through this tour, so bear with us… I just had a vegan cheesesteak from Blackbird Pizza, that might by why I’m so tired.”

In their headlining set, Girlpool launched straight into “Lucy’s,” followed by “Hire,” two Tucker-prominent songs, their tenor straining over taut guitar riffs while Tividad’s angelic soprano wove quiet harmonies in the background. At seemingly random intervals, everyone frantically switched instruments, the atmosphere one of chaos. Tividad strode the stage in pinstripe pants, running her tattooed fingers through faded pink hair. “I’m hiding my smile because I think I have something stuck in my teeth, that’s why I’m being a little shy,” she admitted self-consciously.

For the title track, Tividad knelt on the floor, singing acapella over a buried-sounding drum kit and muddled keys. They closed with the shoegazey, foreboding “Roses,” and disappeared without another word, without even an encore. 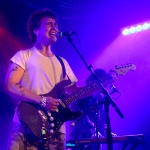