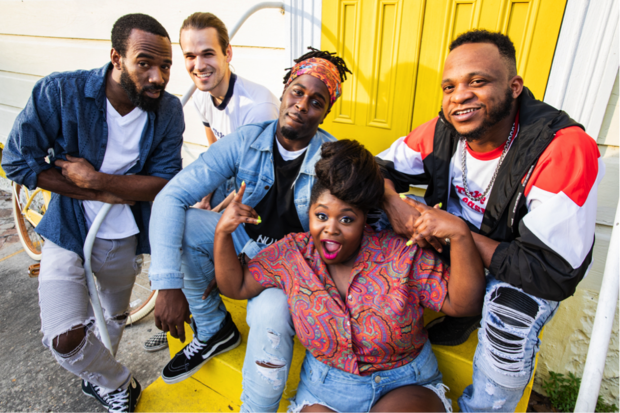 Two years after their sensational Tiny Desk win, Tank and the Bangas have returned with a new album, Green Balloon, out today via Verve Forecast. A hip-hop/soul/R&B/poetry (and more) group based in New Orleans, Tank and the Bangas have developed a sound so specific to their identity that calling them “unique” is an understatement. The group is led by Tarriona “Tank” Ball who said on Instagram that Green Balloon explores “every person I was in my life up until now” through the color green. Green balloon, green with envy, green with naiveté, and other interpretations, it’s an exciting idea to see how far the genre-combusting group can stretch the chromatic concept. Considering that many musicians write about identity, i.e. who we are, where we come from, how we are shaped by our experiences, what makes Tank and the Bangas so different? The short answer: everything.

GreenBalloon is a sonic journey through identity, coming-of-age, and vulnerability. The 13-track, 75-minute album takes its time to explore its themes and pulls in featured artists such as R&B singer Alex Isley, pianist and producer Robert Glasper, and rapper Pell. A balloon is an apt metaphor for this album as each song seems to expand beyond genre boundaries and floats away into its own world. Each track, except for interludes, stretches anywhere from four to seven minutes and several strike strong genre changes within their allotted time. It must be remembered that Green Balloon and all Tank and the Bangas productions are collaborative productions. This album features nearly 30 artists who recorded in 10 studios. It features an fascinating assortment of instruments, including sax, flute, cello, keys, drums, synths, djembe, and produced beats, and it feels nearly impossible to decide which songs stand out among the others when the point of the album, and Tank and the Bangas as a project, is that the songs work together to create a larger whole. Still, here some are selections from Green Balloon that are absolutely cant-miss listens.

This track can only be described as “Migos but Tank.” The opening chime-like beat reminds one of the ATL rap luminaries, paired with ad-lib laughing and lyrics about expensive cars. The signature bass drop flavors the song with trap beat while Tank retains her signature song writing intricacy. With precision and poignancy, Tank raps: “I’m different…I leveled up.” In this line, it’s clear that while this song features a seemingly carefree club feel, it is reflecting on how fame can change a person. “Different” is an appropriately vague, yet effective way to describe this change. With fame — such as your 2017 Tiny Desk Content submission going viral — brings new cars, watches, houses, weaves, and identity.  Maybe Tank is trying to decenter celebrity or maybe she is genuinely gloating. That’s the fun of Tank and the Bangas: interpretation is entrusted to the audience.

This impressive five-minute track was released in March 2019 to promote Green Balloon but a chance to hear it again is always welcome. The song begins with a lullaby-like keyboard solo, gentle plucked bass, and Tank’s whispered verses. At the one minute mark, the song expands and drops into a steady synth and snare beat. Tank raps about childhood playgrounds, “Kool Aid packs and Disney”, and other emblems of adolescence. The chorus asks the question, “Where do the ants go? Why do they run away?” Ants? Tank, what’s the metaphor here? Again, that’s up for you to decide but its safe to say that “Ants” is a love letter to coming-of-age struggles and remembering old neighborhoods, forgotten hairstyles, and long-lost boyfriends. “Ants” twists and turns on itself and is threaded together by psychedelic sax flourishes and incidental percussion. Defining this song takes all the fun out of it. Rather than worry about meaning, Tank wants you to strap in, enjoy the ride, and learn something along the way.

“You should do some nice things for me.” This song is three minutes of pure fun. As deep and profound as Tank and the Bangas are, they know when to mix in some emotional levity. “Nice Things” feels like a contemporary response to Aretha Franklin’s “Respect.” Both songs were crafted by powerful artists who are demanding kindness, though with contrasting sonic profiles. The kaleidoscopic beat in “Nice Things” feels like trap mixed with cotton candy. It’s sweet and sexy, playful and powerful. It is all things Tank and made even better through live performance. Tank and the Bangas premiered this song on Jimmy Fallon a few weeks ago. Check it out here.

Is that a string ensemble, Tank? A full-on orchestra? “Mr.Lion” surprises with its unique hybrid of soul-meets-symphony. The song narrates the story of a cowardly lion that is afraid of opening himself up to the vulnerability of love. Strings swell underneath lyrics and are joined by lush piano melodies. “The things I have to show you goes beyond the pride of your roar,” Tank sings. “Mr.Lion” solidifies Tank as a multifaceted talent who can serenade as well as she can rap as well as she can yip, giggle, shout, and dance. There are no sharp edges in this song. It is all smooth and gorgeous as Tank carries the listener through a Disney-like tale with a mature heart. “There’s no shortcut to love,” Tank reminds us.

Green Balloon offers several interludes and each carves out a one-minute meditation that enhances the philosophical core of the album. “In London” shares a passage from Tank’s personal journal as she reflects on productivity and the changes in her life. “We came across so many blessings but I still feel the same numbness.” This interlude proves that Tank isn’t afraid to expose her own flaws in her lyrics. It would be easy for her to masquerade behind her persona of hyper-positive hip-hop poetess, but she chooses to demonstrate confidence through vulnerability. The interlude is underscored by the Robert Glasper, who weaves etherial piano melodies behind Tank’s words. The two are a match made in Tank and the Bangas heaven, and the several Glasper features on Green Balloon attest to the strength of their collaboration.

As an album, Green Balloon is equally suited to the dance floor or the bedroom. Its built for dancing your cares away or a quiet listen. It’s a masterwork in defying genre, staying to true to your roots, and expanding beyond what has been done before. Tank and the Bangas made a name for themselves by refusing to conform to a single definition of their sound and this album continues that legacy.

Green Balloon will be released on May 3. Tank and the Bangas will perform in Philadelphia on Saturday June 1 at the Roots Picnic at the Mann Center. Tickets and more information can be found at the XPN Concert Calendar.