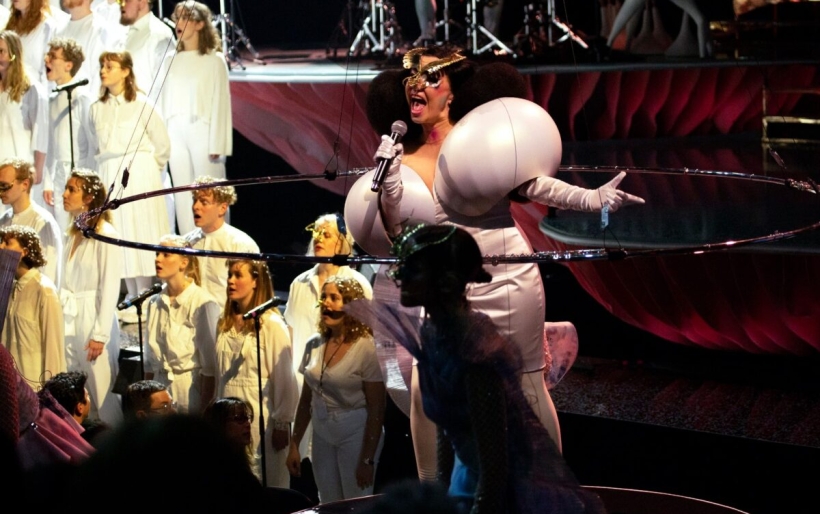 Björk at “Cornucopia” | photo by Santiago Felipe| courtesy of the artist

With Cornucopia, Björk thrillingly celebrates our future rather than her past

On “Future Forever” Björk promises to “build a musical scaffolding.” With Cornucopia, her meticulous and magnificent new staged concert at New York’s The Shed, she does exactly that.

While the audience settles, bird songs and sweet jungle sounds loop. This creates a unique nature-like atmosphere inside The Shed’s industrial interior. After the lights dim, The Hamrahlíð Choir, an Icelandic children’s choir, appears in front of the stage. They preform a darling set, including a cover of Björk’s own “Cosmology.” Once they walk off, an animated video for “Family” is projected onto the curtains of dangling strings that guard the stage. As a glowing purple and yellow Björk fills the frame, the curtains thin out, revealing a stage made of mushroom-like platforms. Finally, singing the gibberish that opens “The Gate”, Björk arrives.

Those expecting Cornucopia to be a greatest hits performance will surely be disappointed. The show is comprised mostly of songs from 2017’s Utopia, and builds on its musical themes. Accompanying Björk in her mushrooms is Viibra, a flute septet, master harpist Katie Buckley, and others. Everyone’s masterful playing illuminates “Utopia”, “Claimstaker”, and “Arisen My Senses.” Awe-inspiring vocalist serpentwithfeet, joins Björk for “Blissing Me”. His moving voice, as well as Buckley’s glittering harp, add an unshakable sense of tenderness to the track. Meanwhile, Manu Delago plays drums floating in water, grounding the ethereal song on Earth.

Manu Delgado at “Cornucopia” | photo by Santiago Felipe | via facebook.com/bjork

During a handful of songs, Björk performs from within a reverb chamber. This cylindrical structure on stage allows her voice to echo without digital intervention. This, and the intricate projections of flowers, amoeba-like figures, and animated Björks displayed throughout the show demonstrate the Icelandic artist’s unique ability to manipulate and highlight the intersectionbetween the natural and man-made. All of this, combined with the mass of instrumentalists and Björk’s voice’s enormous presence threaten to dizzy audience members. Luckily, Luceria Martel’s direction keeps the show running smoothly and without a dull moment.

The show’s centerpiece is the epic “Body Memory”. Björk sings the ten-minute track from within a circular, four-person flute. The Hamrahlíð Choir and two massive suspended pipe organs join her on stage. Everyone’s talents are on full display as Björk laments her inability to cope with the toxicity of urban life. The choir remains on the stage for a mystical and a cappella version of “Hidden Place” and a reworked version of “Mouth’s Craddle.” This new arrangement, done by Venezuelan artist Arca, add ferocious percussion and haunting flutes to the originally a cappella song.

Björk at “Cornucopia” | photo by Santiago Felipe| via facebook.com/bjork

Before cutting to a video of Swedish climate activist Greta Thunberg, Björk suggests that we start anew with “Tabula Rasa.” The climate crisis is mentioned in the projections throughout the show, making clear that Björk believes that it is imperative that we act swiftly and meaningfully to protect out planet. Cornucopia, as well as much of Björk’s discography, sees her celebrating the Earth and urging other to do the same. If anything, Cornucopia”is a testament to the way nature has inspired her and to her commitment to nurture it.

The show officially closes with “Notget” off of 2015’s heartbreaking Vulnicura, but it feels like an afterthought coming after “Future Forever.” Covered in cool blue light, Björk and her cast of musicians delicately present the optimistic track. With it, Björk dares us to build a better future.  Utopia, but especially Cornucopia, present Björk’s vision for such a future. She imagines a flute-filled, matriarchal society in touch with all aspects of nature. Whether or not this is our collective future remains to be seen, but after getting a glimpse of it, you’ll want it to be.

The remaining “Cornucopia” dates are sold out, but the projected visuals used for “Tabula Rasa” can be seen below.