NON-COMM Recap: Y La Bamba call for honesty and empathy at the end of the night - WXPN 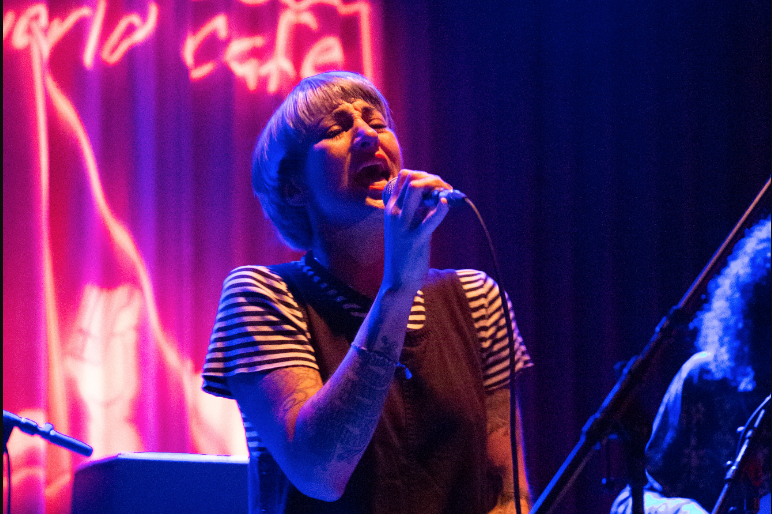 NON-COMM Recap: Y La Bamba call for honesty and empathy at the end of the night

Y La Bamba brought their potent mix of indie-punk, música mexicana and raw emotional storytelling to the PRX stage to close out Tuesday night in inspiring fashion. Throughout the Portland band’s career, lead singer, guitarist and songwriter Luz Elena Mendoza has channeled into their performances the energies of her Mexican-American heritage and her many frustrations with American culture. A mission statement by Mendoza on the band’s Facebook page declares, “BEING A CHICANA, MEXICAN AMERICAN HAS BEEN AND WILL CONTINUE TO BE A STRENGTHENING JOURNEY. I AM LEARNING HOW TO CELEBRATE MY BEAUTY, HISTORY, BE AND HEAL FROM WITHIN IT.”

Y La Bamba were at their most intense last night when Mendoza rapped in unison with keyboardist Julia Mendiolea, including on their fiery opener, “Paloma Negra” — in English, “Black Pigeon.” This track served as a B-side for the title track from their 2019 album Mujeres, Mendoza’s meditation on womanhood and self-love. The band showed off spectacular technical prowess and a passion for fearless experimentation with sound throughout the set. Just as the raging “Paloma Negra” concluded, drummer Miguel Jimenez-Cruz instantly slid into a sly tresillo groove that marked the introduction to “Boca Llena,” another selection from Mujeres. Later, “Bruja de Brujas” exploded into a wash of echoing cymbals and guitars that finally coalesced into the arrival of “Cuatro Crazy,” which sounded even punchier than the album version on Tuesday night. A blend of phasers, distortion and delay lines infused the band’s guitar and vocal sounds with an electric energy, and helped Mendiolea’s synth provide a brooding ambient backdrop for the spoken-word “Santa Sal.” Whenever the drums played, the whole band rarely stopped moving their feet all night. Mendoza, Mendiolea, guitarist Ryan Oxford and bassist Zack Teran often stood in a horizontal line downstage and stepped together in time as if marching into battle.

As the set continued, Mendoza made it clear that she was thinking about more than just musicianship — she wanted to bring an honest message to the audience. As she introduced the ballad “Una Letra,” she explained to the crowd, “It’s about domestic violence. It’s about my mom writing a letter to me, wishing […] for me to have the good things that she couldn’t have. And if those don’t want to hear this story, and you’re here to listen, then I don’t know what you’re doing here.”

During “Una Letra”, Mendoza and her bandmates gently repeated, “No se sabe. No se sabe, se comprende.” — “You don’t know. You don’t know and you don’t understand.” These could have been the word’s of Mendoza’s mother speaking to Mendoza as a child, reminding her how greatly her family had struggled in generations past. Or they could have been Mendoza’s own words to all those in the audience who could never understand how she had struggled while growing up as a Mexican-American woman. Mendoza likely noticed that the audience was less responsive to her Spanish lyrics, perhaps because there were few Spanish-speaking listeners in the crowd, but she kept singing steadfastly in her parents’ native language.

Afterward, Mendoza opened up even more. “I don’t come here to waste my time, […] you hear me?” She waited for the crowd’s attention. “You hear me? […] OK. Because that’s real. I’m not here to be cool, to give you something that you think might be cool. I’m here to give you my parents’ story.”

Once she was confident that the room was listening, she proceeded to address the controversy surrounding another performer who had appeared in the building earlier that night. “I’m very disappointed in Morrissey,” Mendoza declared. She went on to refer to a 2018 interview that Fiona Dodwell conducted with the former Smiths frontman, for which he has received intense backlash. In the interview, Morrissey aligned himself with a UK political movement known as For Britain and dismissed the many critics who have deemed the movement extremist and racist. On Monday night, the singer wore a lapel pin featuring the party’s logo during an appearance on The Tonight Show Starring Jimmy Fallon, which has prompted more outcries over his politics. Morrissey performed at NonCOMM just a few hours before Y La Bamba on Tuesday night, before a crowd that presumably included some of the same listeners who attended the Y La Bamba set.

“I’ve been a huge fan of Morrissey and I just heard him talk,” Mendoza continued, “He thinks that ‘racism’ is just a childish word that we use against one another. He’s a white man with so much privilege! I am so disappointed!”

The band immediately leapt into a fierce rendition of “Soñadora” during which Mendoza’s voice soared to new heights. “Corazón, corazón,” she and her bandmates chanted.

Following “Soñadora,” Mendoza began a solo rendition of “Entre Los Dos,” but stopped playing to make sure the audience was with her. “I politely ask for everyone’s silence,” she said. But as the bar and the back the room remained noisy, she continued, “Because what are we doing here? … People wanna have their drinks, but I’m really asking — just giving benefit of the doubt — just everyone’s silence. To actually listen to what’s happening.”

Mendoza wanted to make sure that NonCOMM attendees had come to the show not just to hear music, but to listen to her personal message. “If you saw, ‘Y La Bamba is playing,’ and you saw what record I put out, and you got to read the story — you got to hear that it’s for women.” This prompted shouts of approval from several voices in the room, but Mendoza seemed intent on getting the attention of even more of the crowd. “You know? Right? Right? Isn’t that what we’re here for? … Let’s remember that, OK? Come on, we’re not children anymore. You know what I’m saying?”

She strummed her guitar softly and continued on with the song, but stopped singing again at one point to remind the room, “I’m not gonna play my song until everyone gets the point … I’m making my point, and I’m gonna make my point everywhere I go. It’s not really about like, you know, hearing me sing, it’s about listening. Like, yeah, if I get to sing, cool. But it’s about listening … and it’s really hard. Like, nobody even knows what I’m talking about back there. No one.” She then addressed those closest to the stage. “But I see you! I see those who are in the front. I see you. I hear you, with your heart.”

After Mendoza completed “Entre Los Dos”, Jimenez-Cruz began a low drum roll and Oxford’s electric guitar shuddered back to life. Before the band began their final two numbers, Mendoza looked to front row of the crowd with resolve. “You guys wanna help me sing this song?”