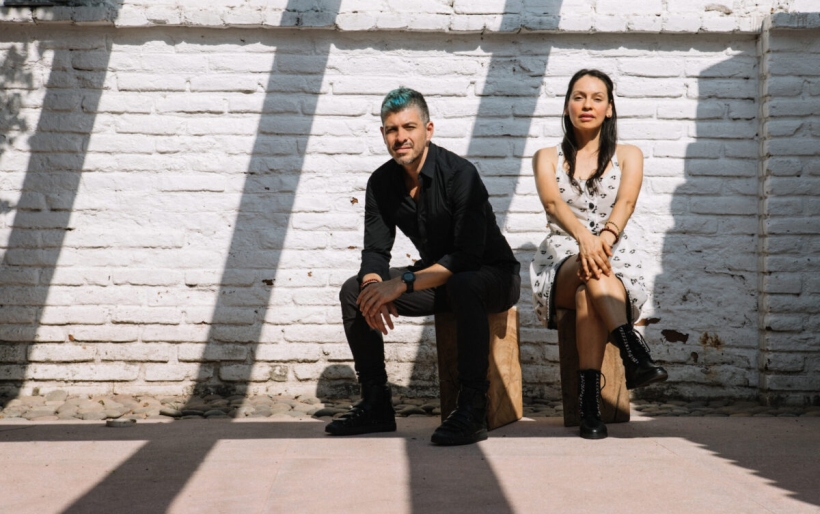 By this point in their long career as Mexico City’s primary musical export — nearly 20 years of a guitar-based fusion of flamenco, folk, doom metal and jazz — Rodrigo y Gabriela’s lives and sounds are thoroughly intertwined. Especially when you consider that Rodrigo Sánchez and Gabriela Quintero have been friends since their teens, long before forming their duo (though certainly practicing together, collaborating and admiring each other’s skillsets).

Their just-released album, Mettavolution, is as dramatic as any in their catalogue and their upcoming shows in Philly – at World Café Live’s NonComm and Franklin Music Hall, both May 17 – will show just how far their friendship has taken them. Our Two to Tango helped take them back to their youth, as well as peer into their future – all with a lot of laughter.

The Key: This question is going to go back a minute. What do you each recall about what you knew about the other when you two first got friendly?

Rodrigo Sánchez: I didn’t know much when I met Gabriela. We pretty much — as soon as we saw each other — always talked about music. I didn’t think too much about her before that. She was working at a place where my brother was running, a culture house. When we finally met, we immediately started talking about guitars. We wanted to take lessons together, but we didn’t go. We just played.

Gabriela Quintero: I wasn’t working there at all. But that’s what he thought.

RS: My brother brought you there, was giving you lessons.

TK: Since you have been a part of each other’s lives for so long, how do you think that forever connection plays into what you guys do now, on the new record?

GQ: In the beginning, we had the same tastes. We were very into a lot of music, as well as what went into our music. That changed. After a time, though we weren’t always so friendly with each other. We went through a period of a lot of arguing. Finally we found ways that we can trust one another more. Just play.

RS: It took a while for us to understand the best ways to work together. I think we pretty much found that place though. That’s why this album is our best. I mean, we always think that our newest album is the best, but, if I really go back and remember all of the processes – any of the previous albums – there is always a song, or two songs, where maybe I wasn’t fully convinced. Maybe something wasn’t right in the production. Now, we were so happy when we recorded the new album, and writing and finding the right music and production for it. We really are so happy.

GQ: Rodrigo has changed his style of playing entirely, focusing more on the melodic. He never really never focused on that before, instead concentrating on just fast running stuff, quick licks. He has matured a lot. I think that means that we both compliment one another’s playing more. It works better. Honestly, I think Rod is very good. [she laughs so hard here, I think she’s dropped the phone]

RS: It’s a fair question. Gab has matured too. On this album, in particular, Gab was really keen to change a lot of the things that she’s been doing for years. The producer asked her to calm down a little bit in some areas, not to go so crazy on the rhythms at times. She was open to do it. She was waiting to do something different, and I think she liked it. So I like that she’s open. That’s one of the principle things about this band — we don’t compete with each other. We complement each other.  Even from the days we used to fight, we knew that. We just understand our roles in the band more. I am so thankful that Gab is my partner in this band. I cannot do what she does, and she cannot do what I do.  It’s a perfect match, you know?

TK: The complementary nature of having played together as long as you have can be both a blessing and a curse. How do the two of you include risk and find new ways into the process, with Mettavolution, say, as the end product of such risk?

GQ: I think it’s important that the two of us work independently. I play every day on my own, and come up with a lot of my own music, by myself. Constant. Sometimes with no purpose. Yet to make sure that I do it. I think that brings creativity and fresh ideas to what we do. We both do that for Rod y Gab. We’re both on the same page, because we spend time apart, productively.  We get the studio, not just with guitars, but with whatever we choose, to experiment. It’s fun.

RS: It’s important that we have solo projects. We do that all the time – they’re important so to balance things out with our band. As musicians, we have an aversion to continuously doing the same thing.  We have to express whatever we are going through, our personal experiences apart. I mean, we are neighbors. We do spend time together when not working, and we share the same vibrations and principles — that’s important too.

TK: When it came to Mettavolution, were you always working together or composing apart? What was the genesis of the album?

GQ: It’s been a really long journey with this record. When we finished the touring cycle for our last album, we didn’t actually stop touring. But we gave ourselves a challenge to come up with new music, because our label and management really wanted a new album from us. As all this was going on, changes in the way that people hear music — streaming, you know — were occurring, We tried to come up with something that fit in all those changes. We went along for almost three years under that premise. We wrote like 30 pieces during that time, and went to the studio…but, at the end of the day, it didn’t feel genuine. It didn’t feel completely authentic to us, So, we went back to what we are, or were, regardless of it fit the music industry, So we made a new statement based on what we like best, closer to who we are, and what felt right. As soon as decided that, like a year ago we were both flowing in new ideas, and came up with another 10 pieces for what you hear now as the new album.

TK: How could you know, or feel, that what you were recording — 30 songs worth — wasn’t genuine? Just a gut feeling?

RS: It sounds like a puzzle, but it’s not. You just stop thinking or having any doubts. I mean, we were struggling through those other songs. Suddenly…and we were in this same hotel a little over a year ago, we clashed over something, a little riff. But we were willing to cross a river of confusion to come up with something with that riff.

TK: That must have been a great riff.

RS: It was. And working on that song truly opened the door for what the new album would become, Funny thing is, that song didn’t make it to the album. So, it’s about feeling. That feeling led us to the new songs. That’s the way to do it.

Rodrigo Y Gabriela headline the Franklin Music Hall on Friday, May 17th. Tickets and more information on the show can be found at the XPN Concert Calendar.