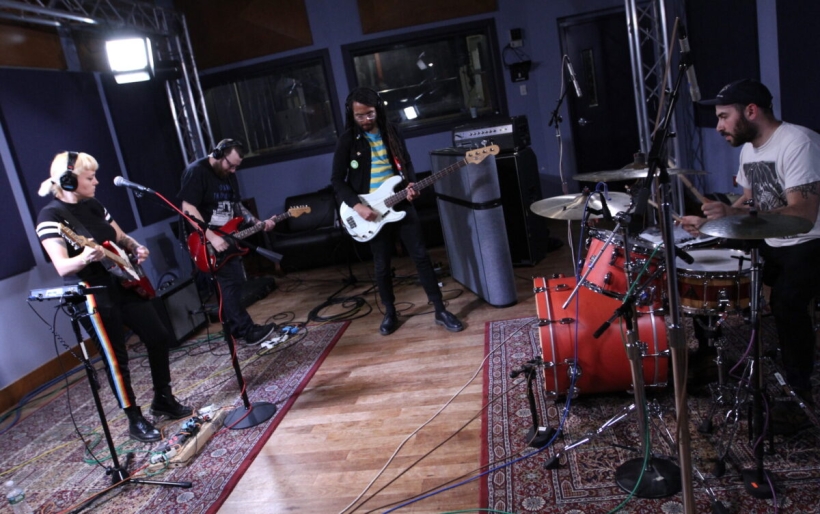 Philly indie-punk staple Cat Park is commanding and cathartic on her latest project, channeling anger and aggression into the edgy noise rock of Tact.

Launched in late 2017 with drummer Jarret Nathan of Pears and also bassist Evan Demianczyk of Pocket — with guitarist Josh Agran of Paint It Black joining the fold more recently — the band’s music is a stark contrast to the cerebral pop of Park’s best-known band Amanda X, or the hooky nuggets of Eight, another of her projects.

In Tact, distorted guitars screech and squeal, Nathan’s drums thunder, and Park poetically details observations on the outside world in a mixture of sung and spoken word lyrics; a little bit Kim Gordon, a little bit Patti Smith. For its Key Studio Session, the four-piece rips it up on three unreleased songs, as well as “Turn Back,” a cut from their 2017 debut interim. That back-catalog cut is the poppiest thing you’ll hear in this set — and that’s not a tongue-in-cheek observation, it is indeed a catchy jam — but it’s also heavy and heady, smoking its way across an expeditious two minutes and change

Tact kicks off the set with “Diagnose Me,” a powerful burner about a woman’s right to choose; the rallying cry “my body, my decision” already stood out in Park’s lyrics whenever this song was played live, and even moreso in the wake of anti-abortion laws passed last week in Alabama and Missouri. Elsewhere, “Compassion” talks about the frustration of doing one’s best and watching things fall apart in spite of it — “I want you to know that I’m trying, I need you to know that I’m trying,” Park pleads — while “Gravel” is a doubletime sprinter built around chugging power chords and fever dream lyrics about memory and the race against time.

Listen to Tact’s full Key Studio Session below; watch their performance of “Turn Back” above. And make a point of seeing them live around Philly the next chance you get. This Thursday, May 23rd, they’re playing a show in West Philly, and on July 1st they’re opening for Ted Leo and the Pharmacists at Boot & Saddle. Tickets and more info can be found at the XPN Concert Calendar.