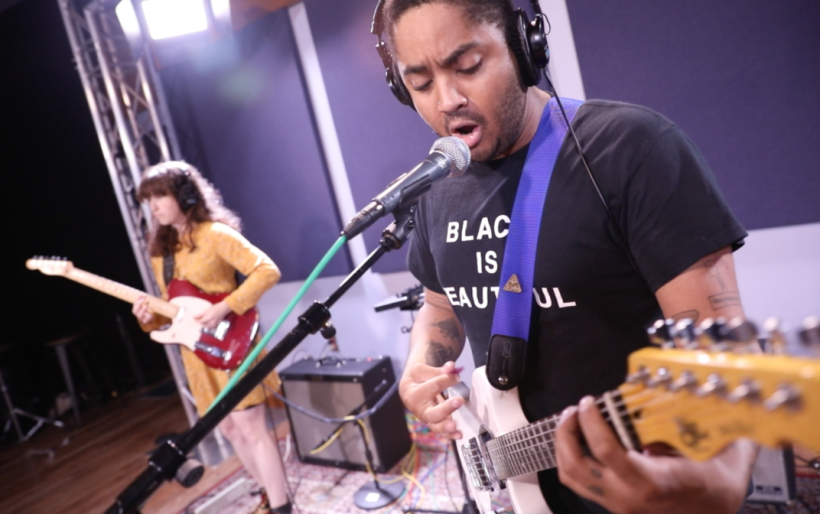 With all due respect to the bassists of the world, I respect the hell out of artists that don’t buy into rock and roll convention, that firmly jettison the four-stringed low end from their instrumental setup. When they do that and sound as thrilling as Philly’s Yarrow, all the better.

Fronted by some familiar punk scene faces — Christo Johnson of King Azaz, Meri Haines of Great Weights — the band takes the Sleater-Kinney guitar-guitar-drums power trio approach, but with the density and catharsis of Drive Like Jehu’s “Luau.” Or, as our Yoni Kroll put it when he named Yarrow one of his favorite new Philly bands last year, Yarrow feels like it’s “channeling Slint and Unwound but in a perfectly pissed off kind of way.” In short: it’s heavy stuff.

Ahead of their appearance this Saturday, May 25th at Break Free Fest — the third annual edition of the festival centering black and brown artists in punk and hardcore — Yarrow (rounded out by drummer Dani Elephant) came by WXPN studios to play an explosive set of songs from A Mild Circus, their February release on Get Better Records.

Going back to that Sleater-Kinney comparison — because one I heard it in their guitar work, I couldn’t un-hear it — consider the way the counterpoint guitar lines of Corin Tucker and Carrie Brownstein felt like they were two voices involved in intense conversation, two complimentary halves of the same story. Imagine that, but with an extra dose of despair: that’s Yarrow.

Thundering clouds of Haines’ guitar cry from your right headphone, while Johnson’s unsteadily teetering upper register guitar licks answer with a shriek in your left. As Johnson pummels complex chord progressions on the one side, Haines is leaning into a rapidly strummed noise solo, scraping strings and hammering the neck of her guitar. Watch that in action on this performance of “Sorrow” from the session.

It’s a visceral sonic representation of Johnson’s lyrics that are frank, and frustrated. “Rescind” is a reaction to both white privilege and white fragility: “What I want from you is an apology / What you want from me is for me not to breathe.” In “Tambourine,” they sing about the suffocating anxiety of living in a world filled with rejection and self-doubt: “I’m so sick of feeling stuck / I’m so sick of waking up.” Other moments take those frustrations and transform them, like “Shyless” where Johnson sings of becoming the best version of themself.

The words are loud, but the guitars are loudest, and Johnson told New Noise that the compositions are what makes them the most proud of Yarrow. “Meri and I have very different styles of playing guitar, but I like how much they interplay and how much they work with each other. I love making weird, good-sounding music, and I wanna keep doing that.”

Listen to Yarrow’s full Key Studio Session below, and see them this Saturday at The Rotunda in West Philly for Break Free Fest. Tickets and more information can be found here.