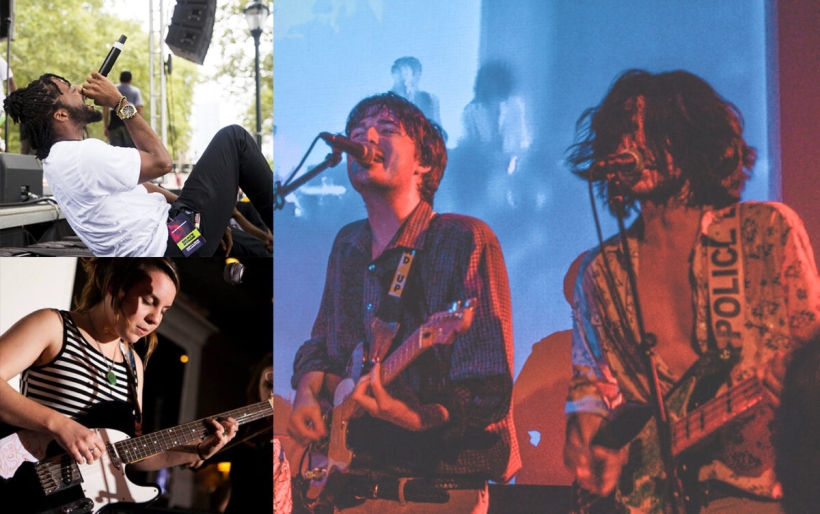 Every summer, Spruce Street Harbor Park holds free concerts on Thursday nights as a part of their Waterfront Sessions, and it’s one of the most reliably awesome hangs of the summer. The park has recently released its lineup of local Philadelphia artists for June, and its bound to get the summer off to a rocking start.

Drawing from inspirations like David Bowie, the Talking Heads, and the Velvet Underground, Sixteen Jackies has an alternative rock sound that they self-proclaim as “glum rock,” a play on glam. They released their debut EP Movie Was Bad in 2017 and most recently put out EP Mascula in 2018, both on Born Losers Records. Their music, especially that on Mascula, is rather dark, commenting on the roles of sexuality in our society. Sixteen Jackies is known for putting on captivatingly theatrical performances. If you enjoy the unexpected, they’re worth checking out.

Colin Dooley is the man behind Attic Tapes. He’s been producing and playing shows around Philly and beyond for about five years. His music samples songs and melodies from decades ago and combines them with modern beats to bring listeners on a journey through time. A lot of his songs have a unique hip-hop 50s vibe, much like “The Shadow” below.

Armani White is a rapper and singer from West Philly who channels personal experiences to tell stories through his music. White has released several singles in the past two years, his two most recent being 2019’s “Secret Handshake”; in 2014, his song “Stick Up” went low-key viral. He performed at Made In America in 2018, and was named an NPR Slingshot Philly artist to watch.

Jah the DJ is also from Philly and has played with names like Future, Goldlink, and Vince Staples. He’s also played with Armani White, so the pairing for this session is more than appropriate. His music isn’t just one genre, as it combines hip hop, R&B, reggae, Afrobeat, and much more. Though Jah doesn’t necessarily fit into a singular category, he produces feel-good tracks that are sure to entertain.

Coming together as a result of auditions for their high school rock band, RFA is a four-piece garage-rock band from Philly. Their self-titled debut album was released in 2018 and they’ve put out a handful of singles and EPs in the past four years. After working their way up by playing small basement and club shows, they toured the country — twice. The band consists of Dan Cousart, Christian Turzo, Brendan McHale and Alec Powell. Check out a track from album RFA below.

DJ Romain seems to utilize absolutely every genre in making electronic dance music. He began making music in France but more recently brought his production over to the U.S. Each of his sets contain upbeat dance grooves that you can’t help but dance to. Listen to one of DJ Romain’s mixes below to prep yourself for his Waterfront session in June.

Ellen Tiberio-Shulz is the mastermind behind this indie rock group. Their songs strongly exemplify Shulz’s feminist worldview beliefs in a passionate and self-expressive way. The group released an LP titled I Can’t Help It in 2015 and several singles since then. Their latest song, “Everybody, Always” was released in 2018.

Rana Ransom is a DJ from “Scrilladelphia,” as she calls it. She spent a lot of time on community radio trying out every genre under the sun, combining disco, new wave, and Italo, and also incorporating Middle Eastern elements into her music, a nod to her family’s heritage. When she’s not DJing or teaching, Rana organized YallaPunk, an annual multi-platform Philly festival celebrating Middle Eastern and North African artists in music, film, and art.

For all the Waterfront sessions above, the DJ set will be from 6:30 to 8:30, and the band will be from 8:30 to 9:30. Unwind after a long day at work with some new music and a $5 beer. You can’t beat it. Find more information on Spruce Street Harbor Park’s Facebook page, and keep an eye out for the July and August lineups too.