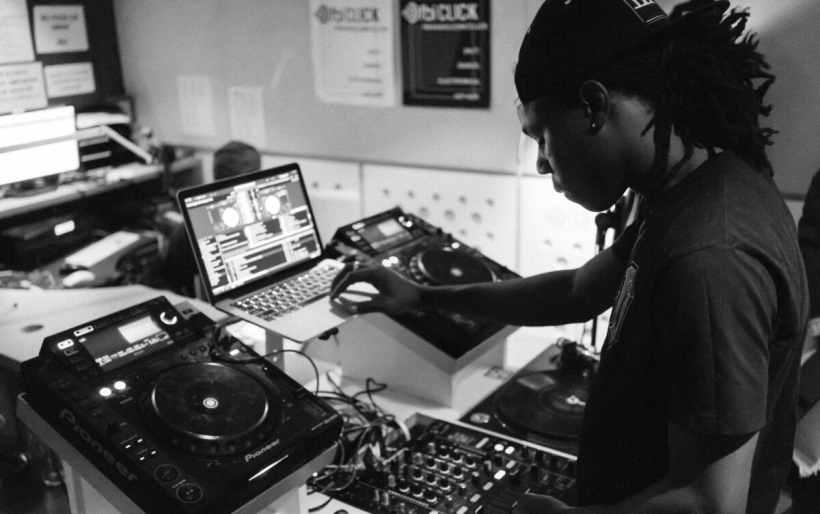 DJ Sega in the lab | photo courtesy of the artist

Growing up in a musical family where his mother was a church choir director and his father a DJ for over 40 years, North Philly native Robert Taylor Jr. — better known as DJ Sega — has traveled the world rocking clubs and festivals with his unique set of virtuosic turntable skills. Before he gained renown as a DJ / producer himself, Taylor would find himself accompanying his dad to gigs like his regular slot at The Baby Grand Lounge in the city’s Nicetown section.

At the same time, Taylor discovered the sound of a revolutionary new sub-genre of dance music that was emerging about 100 miles south from the city of Baltimore. This sound, referred to as Baltimore Club, was a inventive take on the House music sound that was born in Chicago in the 80s. By sampling and layering the open drum breaks from Lyn Collins’ James Brown-produced anthem “Think,” and the Salsoul Records disco oddity “Sing Sing” by Gaz, on top of their propulsive new tracks, club DJs and Producers in Baltimore added a new energy and rhythmic complexity to electronic dance music’s steady 4/4 beat. For Taylor, Baltimore’s Club music would have a profound influence on his own life and artistry.

“I was six years old waiting in the car for my dad to come out the Baby Grand,” he recalls. :He used to leave the radio on while i waited, but this particular night was one of those holiday special live DJs kind of a night. They played (2 Hyped Brothers & a Dog’s seminal Baltimore Club hit) ‘Doo Doo Brown‘ on the radio and it just stuck with me.” Taylor recalls.

“The Teen Late Nite parties that would happen on Saturdays,” he says. “If i had the money at the age of 12, I’d go to both Club UX on Fridays and WOW skating rink on Saturdays. Dee Square played clean but exclusive club music fresh outta Baltimore. It was him that premiered [King Amir’s club classic] ‘Samir’s Theme‘ here in Philly.”

In the 2000s, Taylor donned the name DJ Sega and took up the mantle of resident DJ at WOW which by then had changed its name again to Jamz. It was during this time that Sega had built up a wealth of experience, maturing and feeding his growing gifts as a turntablist and producer. His high-energy DJ style was based on his precise mixing and penchant for crafting quirky and funky remixes of popular songs, cartoons, TV show themes and more.

Upon signing with international juggernaut Mad Decent in 2007, DJ Sega’s star burned bright, releasing tracks and touring around the world. In the midst of all this activity in 2009 he would release New Jack Philly, and as clear an example of a mixtape as mission statement as any in the decade since its release. Its title, a play on Melvin Van Peebles’ classic film, New Jack Philly is a high-powered collision between Taylor’s cutting-edge production techniques and his omnivorous use of nostalgic source materials from his childhood.

It is this mining of nostalgia and memory that lies at the core of the the tape’s DNA. From a dreamy and danceable take on Janet Jackson’s “Miss You Much,” a slick rendering of Pete Rock & C.L. Smooth introspective rap classic “T.R.O.Y. (Reminisce),” Christopher Williams’ New Jack Swing anthem “I’m Dreaming” to a jack-hammering flip of Mary J.’s “Real Love” and samples pulled from Michael Jackson, Bill Nye The Science Guy, Mortal Kombat and Mighty Morphin Power Rangers, the tape itself is a storage house of late 80s / early 90s Black millennial pop-cultural information distilled into the form of a relentless Club music mix.

“Making the mix, there were a few things that jumped out at me because sometimes the songs or mixes make themselves,” recall Taylor. “And they tend to have a message in it beyond my control. The biggest one of New Jack Philly was probably the prediction of Michael Jackson’s death; an experience that’s a complete story in itself. Putting this together was almost no different than any other mixtapes I’ve done, except being that this was the first project I’ve done that’s completely produced by me was a major difference…especially when it comes to the energy involved.”.

A rare DJ mix that was both innovative and cutting-edge while capturing the sound of a very specific era, New Jack Philly is a flashpoint signaling the moment when Philly Club music began to emerge as a force to be reckoned with alongside its Baltimore and Jersey-born siblings. In the 10 years since its release, Taylor has had time to reflect on the tape’s impact and plan the release of a sequel.

“The reception of New Jack Philly surpassed my own expectations,” he says. “I still get contacted about different aspects about it.”

As far as NJP2, the people will get that project May 2nd, 2020 Taylor predicts. “The late 80s and early 90s presented a defiant culture of its time with style,” he says. “New Jack Philly was a way of putting myself into a character to tell the story of what was currently going on and what was next.”