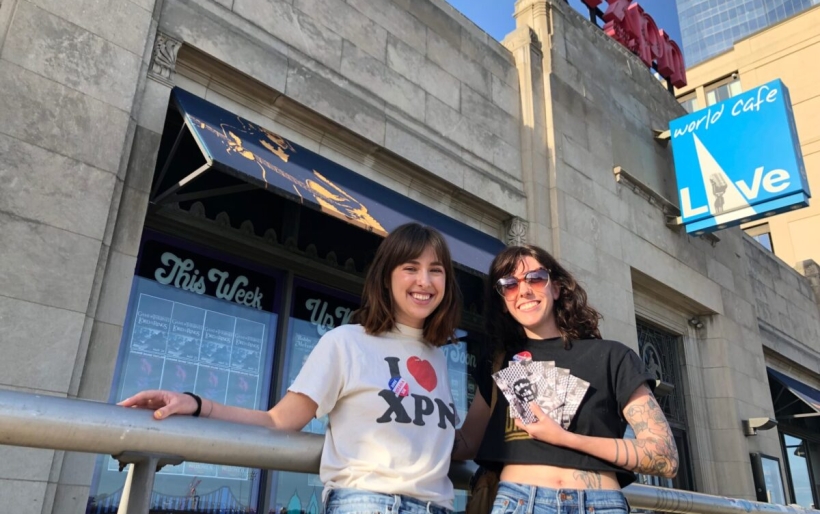 By John Vettese
May 25, 2019
12:05 AM
Share
Paige Walter and Kristen Levine of Cherry-Veen Zine at WXPN | photo by John Vettese for WXPN

A few years ago, Kristen Levine watched The Punk Singer, the 2013 documentary on Bikini Kill’s Kathleen Hanna and the riot grrrl movement she helped propel from the Pacific Northwest scene to the national spotlight. It wasn’t just a movement about music, though. It was about art, it was about feminism, it was about independence and DIY — doing things by yourself, for yourself, and answering to no one.

Levine was inspired, and channeled that energy into Cherry-Veen Zine, a Philly music scene chapbook she began publishing in the spirit of the zine-makers she saw in The Punk Singer. Fleshed out with the work of graphic designer Laura Cherry, an initial run of six limited-edition issues popped up at places around Philly throughout 2016 — Milkcrate, Johnny Brenda’s, Steep & Grind, and Rocket Cat (RIP) — with lots of social media activity like gig photos and playlists filling the space between one print edition and the next.

But early 2017, however, the independent publishing grind had taken a toll on Levine, and she left Philly to spend a year in York, Pennsylvania. When she returned last year, she met Paige Walter — a Pittsburgh transplant with a background in education and journalism — and Cherry-Veen Zine was re-invigorated.

Last weekend, Issue 9 hit the streets, and on Tuesday night, Levine and Walter appeared on the WXPN Local show for a guest DJ set spotlighting their favorite Philadelphia artists — corey flood to Barney Cortez, Blushed to Pine Barons — and talk about their mission.

A quick scan through the current issue makes it clear that Cherry-Veen Zine doesn’t limit its scope to musicians. Yes, there’s a spotlight on indie pop singer-songwriter Kiro Heck, and a feature about the 9-to-5 gig of corey flood’s Ivy Gray-Klein. But there’s also an interview with photographer Julia Leiby, and podcaster Katie Kreuger. There’s poetry, and a coloring page, and design work contributed by a variety of visual artists.

“I think it’s just as important to feature the musicians as it is to feature the people who create the community,” says Levine. “The stories are just as cool from the behind-the-scenes people as it is from the people on stage. And I’m always so interested in why people do what they do. What drives you to get onstage? What drives you to stay up all night editing a podcast?”

Levine terms that broader community “music auxiliary support,” and even if it’s not as audible when you’re listening to the songs in their playlist, it is the very fabric any of any issue of Cherry Veen-Zine you’ll pick up — and you should probably do that soon, since last week’s drop-offs have already been snatched up. This is another key component of the project; even though Walter and Levine are very active on social media, still documenting and the shows they get to (this month they’ve been all about The Dawn Drapes’ residency at Ortlieb’s) and still sharing the music they’re vibing to, they don’t post digital versions of the writing they publish or visual art they feature. You have to find the physical zine to see it, and when it’s gone, it’s gone.

Listen to Kristen and Paige’s guest DJ set below, give Cherry-Veen Zine a follow on Instagram, and keep your ear to the ground for their own summer residency at Ortlieb’s this August.

corey flood – “Crypt”
Blushed – “Webcam”
Scantron – “Give Me Something”