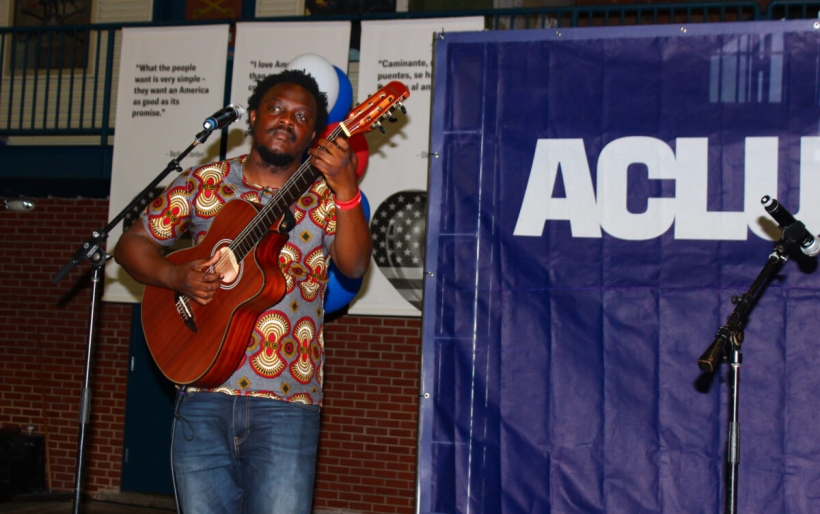 photos by Cambriae Bates for ACLU of Pennsylvania

By Thomas Hagen
May 29, 2019
02:05 PM
Share
Emmanuel Nsingani | photo by Cambriae Bates for ACLU of Pennsylvania

To commemorate the upcoming one-hundredth anniversary of its founding, the American Civil Liberties Union has brought a traveling cultural celebration to more than a dozen different cities across the country so far this spring. The tour, which the organization has called “a multi-city exhibition on your rights and freedoms,” arrived in Philadelphia last Wednesday at 23rd Street Armory downtown, and included musical performances, spoken word performances, visual art exhibitions, and presentations about the ACLU’s work in Philadelphia.

Thursday afternoon featured a performance by Victory Boyd, an emerging singer-songwriter who performs solo as Victory. Boyd comes from a family of performing musicians known for busking together in Central Park, and in 2017 she signed a contract with Roc Nation — JAY-Z‘s label, and a partner with the ACLU. Her debut EP It’s A New Dawn came out in 2017, and her LP The Broken Instrument followed in 2018.

Victory performed songs from throughout her career during in an awe-inspiring set on Thursday. She began with “Feeling Good,” a song that she covered on It’s A New Day, and a song which she says she has held close to her heart since childhood. As she introduced the song to the crowd gathered near the stage, she explained that it was inspired by the feelings of a slave who had lived his entire life in bonds and suddenly became free. The song was made famous by Nina Simone in the 1960s and has been popularly associated with the American civil rights movement ever since. Victory followed with “Weatherman”, from her 2018 album, which she said she wrote about “the hope that we have in the midst of storms.” Victory stood alone on stage with her acoustic guitar as her singing echoed to the ceiling, solemn and proud. Her voice is unforgettable.

She later performed an R&B-inflected cover of “Somewhere Over the Rainbow”, with original lyrics at the end. “Bluebirds fly over the rainbow, so why can’t blackbirds?” With resolve, she concluded, “I wanna fly, so I’m gonna fly.” Victory Boyd | photo by Cambriae Bates for ACLU of Pennsylvania

Victory also performed the title track from her album The Broken Instrument, which she composed as a story in three parts. She narrated, in song and in poetry, from the perspective of a guitar that was once well-loved by its “maker” and by a musician who owned it, but was later damaged and thrown away. This story of being “broken,” isolated, and finally redeemed served as the inspiration for a panel discussion on criminal justice reform following Victory’s performance, led by scholar, attorney and hip hop artist Timothy Welbeck. Panelists discussed issues relating to mass incarceration, as well as “the art of living” and “the possibility of hope.”

Later in the afternoon, Emmanuel Nsingani and Momo Baz gave a passionate duo performance. The two musicians, originally from Brazzaville, Republic of Congo, came to the US as refugees seeking asylum, and they are currently based in Harrisburg, Pennsylvania. Nsingani is a songwriter and multi-instrumentalist with interests ranging from folk to jazz to RnB to Congolese rumba and soukous. Baz’s work as a singer and percussionist is inspired by the fusion of jazz and pop with traditional Congolese styles. When I spoke to Nsingani before the show, he said the they were both honored to be involved in promoting the ACLU’s work. He is currently working on his first full-length album of original music, and he hopes his music will help raise worldwide awareness of human rights issues in the Congo.

Nsingani began the set with contemplative fingerpicking on his acoustic guitar; his sound was subtle, but full-bodied and rich. Soon, he added more layers of guitar using a looping pedal, as Baz entered with gentle percussion. Nsingani’s voice was warm and sweet as he sang in several languages, including French and English. The duo’s quietest songs featured brilliant vocal harmony, while their loudest featured tight rhythm guitar parts and a strong backbeat. Nsingani showed off stunning technique on the guitar as he improvised intricate melodies and scatted in unison. On their rendition of “Malaika”, a Swahili folk song from Tanzania, Nsingani’s voice carried through the hall as he belted in his strongest range. Momo Baz | photo by Cambriae Bates for ACLU of Pennsylvania

The two singers proudly showed their affinity for pop melodies, too — the set also included “La Vie en rose”, Camila Cabello‘s “Havana”, and John Legend‘s “All of Me”, tenderly sung by Baz. Their smiles assured the audience that, above all else, they were playing music they loved. They closed their set with “Remember Me”, a song by South African reggae artist Lucky Dube, with lyrics about loss, searching, and unending love for family. “Wherever you are, remember me. In what ever you do, I love you,” Baz sang again and again.

The ACLU’s tour concludes this weekend in New York City. Find more information, and a full schedule of the spring’s events on the organization’s website. photos by Cambriae Bates for ACLU of Pennsylvania