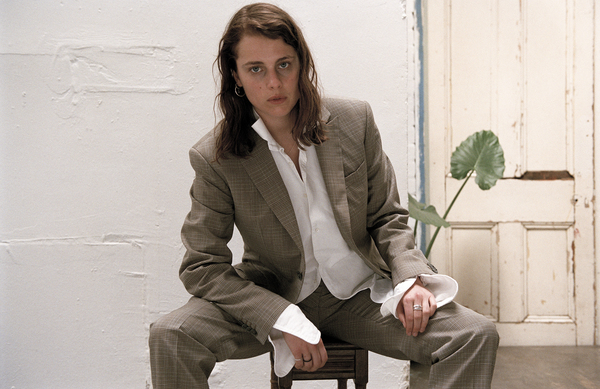 Marika Hackman | photo by Joost Vandeberg | courtesy of the artist

UK singer-songwriter Marika Hackman released the music video for her song “i’m not where you are,” on May 22nd in anticipation for her upcoming sophomore album. Any Human Friend is set to release on August 9th under AMF records. Disgruntled with the outside world and interpersonal relationships in general, Marika does not interact with her environment for the entirety of the four-minute video, making for a highly experimental and captivating scene.

The video opens with Hackman being repeatedly slapped in the face, presumably by former and current lovers. Later it pans to montages of experiences in each one of the relationships. Strewn throughout the video are clips of each relationship deteriorating. One girlfriend is shown with dark makeup smeared across her face as she dumps Hackman’s clothing out of the window, another lover deserts Hackman in a car, and another dumps a bloody mary on Hackman while they eat breakfast together. The video ends with Hackman looking directly at the camera, covered in her drink, in a fashion that closely resembles the bloodied scene at the end of the film Carrie.

These visuals perfectly accompany the tone that Marika tries to set as an artist. Melancholy, depressed, and self-deprecating lyrics are put to synth and guitar heavy tracks in much of her music; “i’m not where you are” is no exception. She skillfully explains the struggle of not being on the same page as another person within the context of a relationship, and the video serves as a visual depiction of emotional unavailability.

In addition to an upcoming album release, Marika Hackman announced a tour, which brings her to Philadelphia on October 14th for a show at Boot & Saddle. Get tickets and more information on the concert at the XPN Concert Calendar, and watch the video below.