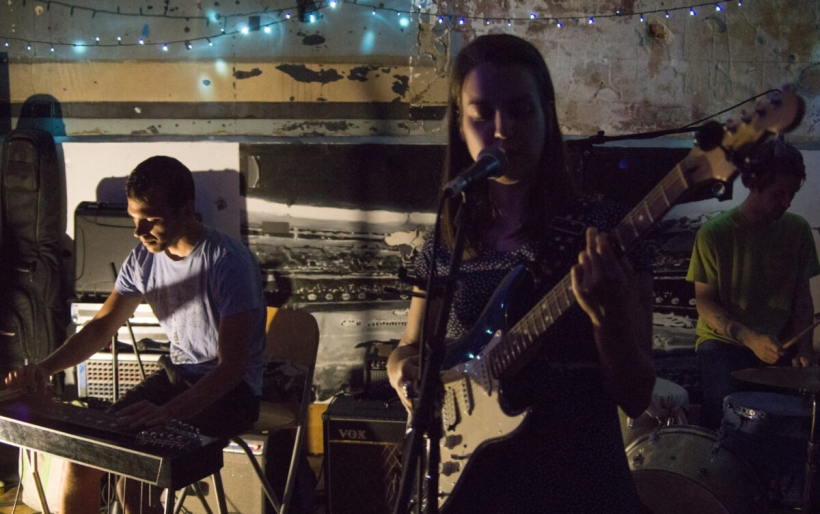 By Thomas Hagen
June 07, 2019
12:06 PM
Share
Free Cake for Every Creature | photo by Benjamin Lovell | courtesy of the artist

In March, Free Cake For Every Creature announced they would disband after two final shows in May, at Trans-Pecos in Queens on the 30th and at Everybody Hits in Philadelphia on the 31st. Singer-songwriter Katie Bennett began the project independently while she was a college student and released her first tape in 2013. Since then, Bennett and several bandmates have recorded six more full-length releases as Free Cake For Every Creature, all of them intimate and captivating. They have been based in Philadelphia for the last four years.

After releasing The Bluest Star in 2018, Free Cake toured internationally for the first time ever in 2019. When this tour concluded a few months ago, Bennett announced online, “my pride in ‘The Bluest Star’ & our recent European tour have beyond exceeded any hope or expectations I had for the band & it just feels right to end now, on a high note. […] I’m eager to move on to other projects, but playing with free cake was the best way I could have spent half my 20’s. I’ve learned so much about how I want to be as an artist and person, gotten to see a lot of our country and the world, and found my community among the smartest and weirdest creatures in the universe.” Bennett and the band bid farewell in a beautiful show last Friday night, with help from Amy O and Remember Sports. A few minutes after the doors opened at Everybody Hits, the sun was setting and the batting cages inside were still busy. Fans had already been trickling in; some sat at the picnic tables and some sat on the plywood floor, cross-legged underneath blue and turquoise string lights. After the cages closed, the atrium was almost pitch dark and the light from the bathroom sent oblique shadows up the walls. Blink-182 played from the PA as more fans arrived, and soon the room was full of hugs and laughter.

Remember Sports broke the night open with the high-energy “Tiny Planets” from their 2014 debut Sunchokes.”You’re the reason why I can never hide,” guitarist and frontwoman Carmen Perry sang in earnest with her eyes closed. At one point, she asked the crowd to step in closer to her. The local punk rockers were gritty and impressively confident throughout their set, and they showed how much they have grown together in the years since they moved to Philadelphia from Gambier, Ohio, where several of the members began playing together in college. “I feel like Katie was the first person we met here,” Perry told the crowd as she thanked Bennett for helping the band find its place in the city’s indie music community. Remember Sports closed with the draining and gorgeous “I Liked You Best”. By the time Amy O took the stage, an even larger crowd had gathered – about one hundred people and one friendly dog. The Bloomington, Indiana trio started their set with a warm rendition of “Arrow”, the title track from their 2016 debut album. Throughout the set, frontwoman Amy Oelsner wore a sweet smile as she plucked and strummed with her thumb and fingers. Electric bass and stripped-down drums supported her soft overdrive guitar parts; some of the trio’s most poignant moments came when the guitar and bass played melodic parts together with the sounds of drums and voice stripped away. Oelsner also gave thanks for her relationship with Free Cake, and told the crowd that she found it “really inspiring to be around their music and them as people.” Amy O also performed an unreleased new song in which Oelsner sang about “the sun-kissed younger version of me,” and they finished their set with “Sunday Meal” from their 2017 album Elastic.

As Bennett stepped to the front of the stage and strapped on her black Stratocaster for the Free Cake set, the band – which included longtime members Pete Gill on guitar, Heeyoon Won on bass, and Francis Lyons on drums – also set up a ten-string pedal steel guitar and covered the drums with tattered t-shirts. When Bennett first spoke, she seemed just as eager to share her music as she must have been when she played her first show. “Thank you so much for being here, we are Free Cake For Every Creature,” she said with a smirk, before adding, “I feel like my heart’s going to explode.” The band opened with “Around You” from The Bluest Star, and Bennett immediately pulled us all in close with her tender singing –  “Our drinks are the same color through the blue glass.” With full-bodied realizations of old songs and new, the ensemble’s playing throughout the set demonstrated the beautiful range of Bennett’s work as a songwriter: from wide-eyed rocking to disarming intimacy, always colored with bright country charm, all tied together in knots of vulnerability and yearning. Free Cake songs evoke images of the open road in the American West just as often as images of quiet bedroom corners in a city’s night. Bennett sings of wishes shared everywhere.

Lyons and Won tapped out a keen groove as Bennett whispered about her plans to acquire lots of gumballs and plastic jewelry on “For You,” from 2016’s Talking Quietly of Anything With You. Then on the more spacious “Sideline Skyline,” Gill’s warm pedal steel melodies rang out like bells. “Just Stay The Same”, which originally appeared on the 2013 tape shitty beginnings and then on Pretty Good in 2014, featured some of Bennett’s most touching lyrics – “All my friends stay in one place, stay in one place just like a picture in a frame,” she sang softly over the hum of the air conditioning. Free Cake’s songs about growing up and accepting change, which were many, took on a new significance in a room filled with so many of the band’s personal friends and longtime fans who had grown into adulthood while listening to their music. Bennett was careful to express gratitude, but never nostalgia, for all the love that the project had brought her. “I didn’t really prepare anything to say,” she explained. “And I’m not very good at speaking from up here, but just know that the feelings are there.” Free Cake for Every Creature | photo by Thomas Hagen for WXPN

After that, Bennett introduced “Can’t Sleep, Still Daydream” as an “old song for Chris, for his birthday, and for West Virginia!” During the song, she sang verses about learning to love different places in the United States, with playful whistles in between. The band followed with the optimistic “First Summer In A City,” and “Christina’s World,” which found them at their slowest and most delicate. Before introducing the last song in the band’s farewell set, Bennett let the crowd know, “This is a very strange experience, the first of its kind. I’m happy it’s happening.” The marching snare drum began “Be Home Soon,” and Bennett sang of “riding home from work on a Friday afternoon.” As the band rode the song out, its sober, resigned ending was the longest stretch of wordless music they played all night.

The crowd showered them in earnest applause afterward as they all hugged one other and stepped offstage, but they soon returned for a glad encore. “Last night I said I wrote this three and a half years ago on my birthday,” Bennett told everyone. “And then I realized it was four and a half years ago – I think.” “All You Gotta Be When You’re 23 Is Yourself” was Free Cake’s most fearless song of the night. “I am 23 years old today,” Bennett declared in the second verse, before several fans joined in to ask, “Where’s my birthday cake?”

After the show, Bennett ran the Free Cake merchandise table by herself, where she sold tapes and t-shirts, as well as copies of a zine that she recently published, entitled “Jesters In King City”, which recounts traveling experiences and personal realizations from her time with the band. In the zine’s introduction, she explains, “Now that I’ve ended the project, in some ways I’m back to where I was when I first started the band. I can do anything.” Bennett has not yet shared any new work online or any information about her future plans, but in March she assured fans that she is “slowly working on long-form writing projects and new music.” 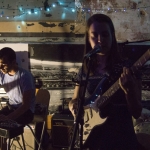 Free Cake for Every Creature | photo by Thomas Hagen for WXPN