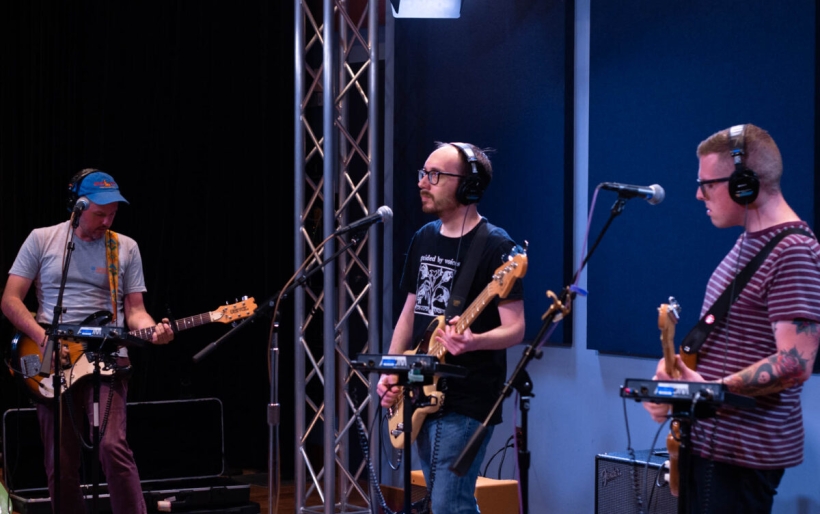 There’s something of a common thread in all the bands we’ve seen South Jersey’s Brian Mietz play in over the course of the past decade.

Whether you’re talking the mathy pop of It’s A King Thing, or the poppy introspection of The Not Fur Longs, Mietz has a penchant for irresistible hooks and inviting melody, for nerdish wordplay and 90s style fuzz-tones, and for a sensitive outlook that’s presented in a somewhat self-deprecating way.

We see all of that at play in his new outfit, Cabana Wear, which is the summertime alt-rock project of singer-guitarist Mietz, teamed up with Haddon Heights, NJ scene peers: bassist Dan Saraceni (of By Surprise) guitarist Alec McVey (of Aspiga) and drummer Eric McConathey (of Brackish). Drop the needle on the tidal pool blue vinyl of their self-titled debut LP and you’re greeted with crunchy guitars and bright riffs paying homage to their power pop inspirations from Big Star to Nada Surf to Weezer and beyond.

A song like “Scaredy Horse,” which we get a toe-tapping Key Studio Session performance of, is based around that sort of non-sequitur lyrical approach that has you scratching your head but also coming back to its musings on fear and insecurity. By comparison, “Least Comfortable Me” is straightforward, candid, heart-on-the-sleeve pop. Mietz doesn’t seem like an uncomfortable person — he’s actually a funny, happy-go-lucky kind of guy — but maybe that’s a reflection of how we use humor as a means of self-protection. The songs of Cabana Wear take part in this practice, while in some ways copping to it in the process.

The radiant “Summer” is a lovelorn gem bringing the set to a close — it’s about a person, it’s about a season, it’s about a state of mind — and you can watch a video below of the band playing that one in XPN Studios. But the music doesn’t have to stop there. This Saturday, June 22nd, Cabana Wear kicks off summer with a headlining show at Gradwell House Studios. Their co-stars in this week’s Key Studio Session double header, The Warhawks, also perform, and you can find more information at the gig’s Facebook event page.