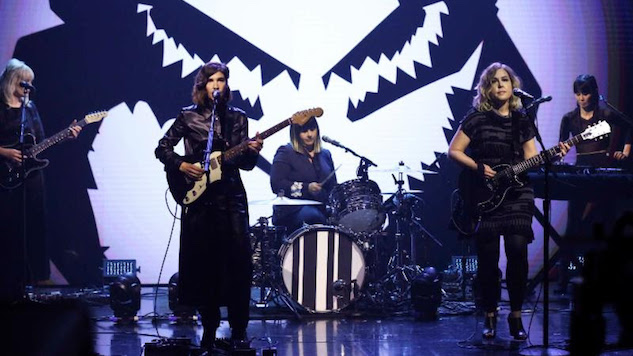 Watch Sleater-Kinney bring “Hurry on Home” to The Tonight Show

Last night, Sleater-Kinney treated the world to the live debut of their latest single, “Hurry On Home.” Dressed in all black, the Portland trio, joined on stage by two additional instrumentalists, tore through the pulsating track on The Tonight Show Starring Jimmy Fallon. In addition to singing and playing guitar, Carrie Brownstein partook in some light choreography. Her movements are reminiscent of St. Vincent’s performing style during her self-titled album cycle. This reflection of St. Vincent is unsurprising as Annie Clark is responsible for the production on “Hurry On Home.” Clark produced the entirety of Sleater-Kinney’s upcoming record The Center Won’t Hold.

To match the band’s all-black uniform, a series of black shadows and animations draped the wall behind them. Often hands poked out from behind Janet Weiss and from the ends of the stage. Dramatic shadow puppets appeared as did a giant blinking eye. All of this served to further the drama of the performance. The band played with straight and serious faces and rarely strayed from their starting positions. In staying so stoic while playing such a rowdy track, the band demonstrated to viewers that they really mean business this time around.

In a recent interview with The Fader, the band discussed the heavy themes and inspirations that guided The Center Won’t Hold. They remarked at the profound impact the 2016 election had on them as individuals and as a group. The gravity of the election’s consequences is mirrored in the heaviness of the record. Pre-release tracks, “Hurry On Home” and “The Future Is Here” provide a taste of the weightiness of the record. Both tracks are excellent additions to Sleater-Kinney’s discography and illustrate that they will never stop pushing their sound forward.

Sleater-Kinney will play The Fillmore on October 27 as part of their fall tour. Find tickets and more information on the XPN Concert Calendar. Watch Sleater-Kinney’s Tonight Show performance below.