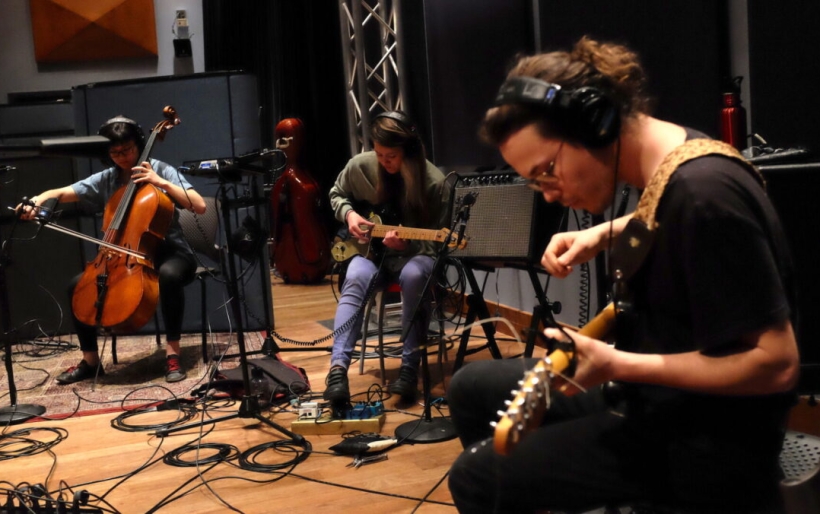 The seven members of Philadelphia instrumental ensemble Hour are intricately aligned, the pieces they play fitting together perfectly like a puzzle. In a recent visit to WXPN studios, the band showcased music from each of its two albums, last year’s moving Anemone Red — whose compositions are gradual bloomers, but deeply affecting, approximating the haunting film score for a naturalistic drama — and 2017’s Tiny Houses — an exercise in minimalism, and crafting sonic spaces marked by absence more than presence.

Whether they’re in the slowly waking mode of the latter approach, or the more built-out arrangements of the former, every sound Hour makes is full of intent, whether it be the steady thrumming of violins and violas, the patter of a floor tom covered in a blanket, the switch from a meditative keyboard drone to a unfurling chord, or the repeated chimes of a lightly plucked electric guitar.

Hour’s studio session for Folkadelphia and The Key features band leader Michael Cormier on electric guitar, Jason Calhoun on synth and violin, Evangeline Krajewski on synthesizer, Matt Fox on viola, Evan McGonagill on cello, Pete Gill on Drums, and Abi Reimold on guitar. Below, watch a video of the band performing “Let me spare us the trouble” and “At the bar where you literally saved me from fatal heartbreak,” and catch the band live at PhilaMOCA on Tuesday, July 2nd. Tickets and more information on the show can be found at the XPN Concert Calendar.