The dreamy chaos and nervous energy of Philadelphia's The Ire - WXPN

The Ire | photo by John Vettese for WXPN

The dreamy chaos and nervous energy of Philadelphia’s The Ire

Philadelphia’s The Ire is a more than a goth-punk band, they’re the embodiment of a city that feels immersive, both in the music and art scene as in daily life. Philly is a city filled with the dreamy chaos of refinery explosions and alternative pride marches, and somehow The Ire has managed to channel this kind of stuff into an EP and accompanying live performance truly representative of that lived-in, on-the-brink nervous energy.

Sure, it’s just a self-titled demo, a collection of five wiry punk songs that manage to feel nostalgic and futuristic all at once, but with songs like “The Adventitious” barreling through the fog (“Our rage has ripped the final veil / but we know they won’t concede! / as they eliminate our evidence / to satisfy their greed,” vocalist Maya Brooks sings) it’s easy to see how The Ire’s music has evolved to be endemic of the environment that spawned it: noisy, dream-like, and teetering on a revolution.

We sat down with The Ire to talk representation, punk’s riotous frivolities, and being witness to change in a musical and political environment that refuses to.

The Key: Who are the members of The Ire, how did you meet, and what influences brought you together?

Maya: The Ire is me, Ashley, Florence and Daniel, I think we all met at different times, but Florence brought us together for this project. A few years ago after Florence had moved to West Philly, they had posted in this local forum about wanting to do a deathrock-y type band. I had reached out about maybe doing vocals and maybe more, despite the fact that I can’t really play anything.

Ashley: In 2016, I answered a Craigslist ad for a room in South Philly, and one of the roommates was Florence. We lived peacefully alongside each other in adjacent rooms making our separate musics, occasionally sharing new insights. There was even a memory of Flo suggesting to play drums in a project of hers, but my kit mostly collected dust and we barely hung out at the time. A few years later, I moved out and this band began its round robin with different members of the scene. There was a version of Danny playing drums and another with Maya playing bass! I’m having a hard time remembering the many monikers we had, but Florence always wanted to spearhead something of her own in the italo, anarcho-punk, industrial, synthpop realm. We always shared a love of simple, dark yet catchy modal sounding melodies often found in medieval or Russian/European folk music. From Khno to creepy lullabies. It’s a thumbs up.

The Key: On the song “Torch Song”, the line “In these strange plays, the characters we create, play tug of war, and other power games” really sticks out as a powerful sentiment. Are you talking about the facade of who we are as human beings, or our reliance on politicians and corporations that run our lives in some ways, but that we continue to give them power? If yes or no, could you elaborate on this?

Maya: For me, “Torch Song” is ultimately about relationships and taking the patterns we adopt when engaging with certain people, places, or even certain parts of ourselves—then challenging that. That line is mostly referring to the ways we re-enact things, childhood games here, that rely on power dynamics, the next line being me calling for their destruction! It’s about being frustrated by the illusion of change and the illusion of power, and being determined to break out of it, especially when it’s actively working against you.

The Key: “Torch Song” in general has a lot of energy that seems to revolve around a deconstruction of cynicism. It would seem that cynicism and nihilism are often considered the cornerstones of goth music. Do you find that to be true? How does one navigate a scene where cynicism has crept in, how do you stay a positive, glowing spirit in that darkness?

Maya: I think that cynicism and nihilism are important elements of goth music, and any sane way of looking at the world. If you can’t recognize that everything is fucked, then god help you, you know? The planet is dying and we are living in a terribly traumatized society with a dwindling ability to perceive the truth—things are at the absolute worst they could be. However, we are alive and we have every right to enjoy that even if we have to fight for it.

Florence: Historically yes, but my favorite element of goth music is the balance of cynical, despairing thoughts by whimsical sounds and lush tones. The “only in darkness can there be light” concept rings true for me and I try to write in a way, musically, that conveys interplay: major/minor/modal contrast and using syncopated rhythms that promote dancing. The feeling of collective dancing is radical, loving, and light, in these moments are the glimpses of hope we can carry with us amidst the world’s darkness. Leaning into cynicism and nihilism make sense, both those concepts involve a lot of confrontation with intense feelings and experiences. I think what I try to stray away from most is apathy. 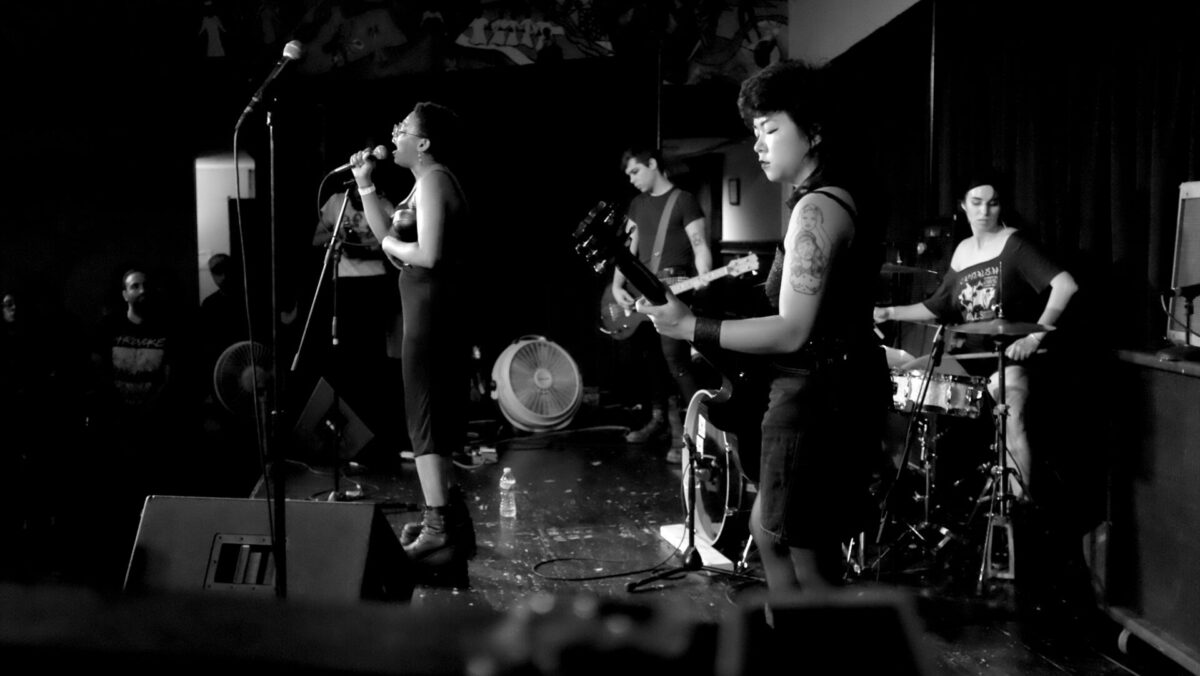 The Ire | photo by John Vettese for WXPN

The Key: Another phrase that sticks out on the demo is “Lead in our water or in the back!” from “The Adventitious”; it seems to be talking about the ways in which the proverbial “they” repress and oppress us. Is that a fair interpretation of that line? Can you elaborate on how much paranoia, or uncertainty about the current state of the world play into your lyrics?

Maya: Oh definitely, I think a lot of our songs are more vague and my lyrics are mixed between personal experiences and how those connect with the world at large, but that song in particular is about Black pain and Black struggle. I carry a lot of that with me, probably more than I should, but the violence we’ve lived under, and are still living under is something that is present in my day to day—I think it’s there for all of us. The world is terrifying and this is my way of working through that, of validating that not only within myself but in anyone else who wants to understand.

The Key: As Black and POC folks playing in Philly’s punk scene, do you find that this is a city that struggles with diversity? How can we work to improve POC involvement within the scene? How can we make sure underground music supports different gender expressions?

Maya: Well, yes and no. From coming off of the high of Break Free Fest, I know that Black People, Indigenous People and all other People of Color have a voice in Philly. Even if not everyone there was from or lived in Philly—it happens here. I think that’s important. I feel like the struggle is in the nature of how vast Philly is and how hard it might be to find spaces for us to commune in on a regular basis.

Florence: Underground scenes are siloed and there needs to be more cross-talk. Punk is an ethic! Be willing to teach and invite Black, Brown, and POC folx who aren’t already involved in music creation. Prioritize their involvement without tokenizing their identity. Patience with the process and look outside your familiar friend group.

The Key: You are playing in a genre where some of its originators have sort of become anathema by saying and doing things that seem to contradict what they initially stood for. We’ve seen weird statements from John Lydon of PiL and from Morrissey with regard to issues of race and immigration, for instance. How do you navigate a scene whose heroes seem to be disappointing? Who are some unsung post-punk and goth heroes of yours that inform your work whose ideas that you feel comfortable championing and being inspired by?

Florence: Kill your idols, I guess! While disappointing, there are problematic idols in every scene and no one’s work should be above their morals. Glorious Din was a great post-punk band with Sri Lankan singer Eric Cope breaking boundaries.

Daniel: It is extremely disappointing to see those famed in punk and alternative genres speak about such important issues as race and immigration negatively. Especially after people have really identified with their former, more “progressive” messages. For them to turn things around is really a saddening sort of betrayal.

We pull influences musically from many post punk and goth genres, but having a Black woman as a front person especially in this style, is really what informs our work. The music we pull from really hinges on self reflection and inward darknesses and feelings that serve as a springboard for the ideas we want to champion.

Maya: Disappointment like that kind of feels rampant these days. Not that there haven’t been people in music or other artistic mediums sharing these beautiful, powerful ideas with the world, then offstage their actions kind of show their personal truth—It’s one of the worst things about being human. I hold more space for the ideas that resonate with me than I do the vessels that channel them. I just collect them and connect them in ways that make sense to me, and that honor my experiences.

The Key: What is next on your agenda? Any recordings or releases in the works? Tours and shows?

Daniel: Temple of Angels on July 17 is the next local show, at Cousin Danny’s. There’s Skull Fest in Pittsburgh in August, then in September we’ll be on the West Coast ending at Near Dark fest in Oakland.