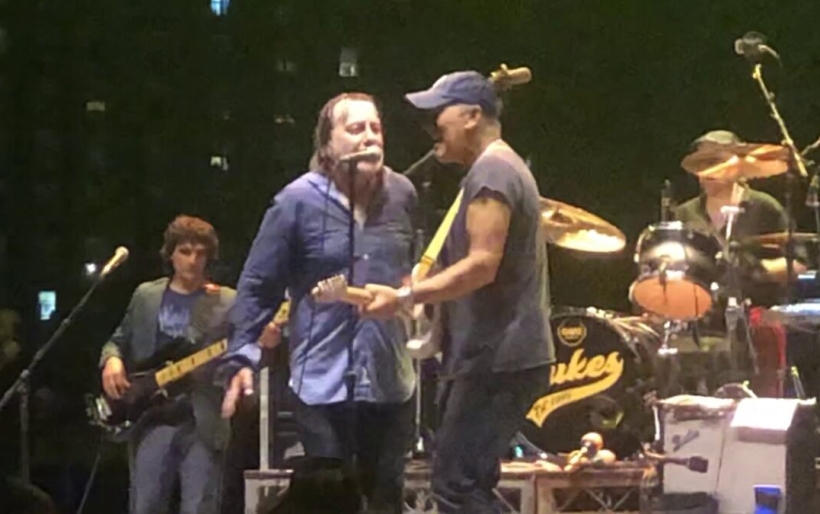 Bruce Springsteen at The Stone Pony | still from video

On Saturday evening, Bruce Springsteen appeared at Asbury Park, NJ’s Stone Pony for the first time in eight years — his last appearance there was at a benefit for Monmouth County’s Ranney School in 2011, but his historic rise in the 1970s has long been associated with the beloved rock venue.

Springsteen shared the stage this weekend with Gary Tallent, longtime bassist from the E Street Band, to perform material from Tallent’s new solo album More Like Me, which came out in May. He also performed an extended set with Southside Johnny and the Asbury Jukes, which included songs from throughout the Jukes’ forty-year career and several selections from the E Street Band’s catalog as well: “Sherry Darling,” “Kitty’s Back,” and more. Below, check out videos of Springsteen and Southside Johnny’s John Lyon performing “Talk to Me” from the Jukes’ 1976 album Havin’ A Party With Southside Johnny, as well as “Kitty’s Back” off of Springsteen’s 1973 album The Wild, the Innocent & the E Street Shuffle.

Local news outlets have also noted that the timing of this Stone Pony show was particularly poignant because of violence that occurred in Asbury Park just two days earlier, on the night of July 4th. Shortly after the beach’s annual fireworks show, two people were shot in the area just outside the Stone Pony, and both were wounded but not fatally injured; authorities reported the arrest of a local teenager on gun charges related to the shooting. In spite of this tragedy, state police have reported decreasing crime rates in the area and New Jersey residents hope the revival of the Asbury Park waterfront, where the Stone Pony is located and where Bruce Springsteen and the E Street band have played countless hometown shows, will lift the status of the city as a center for family life and popular summer events on the state’s North shore.