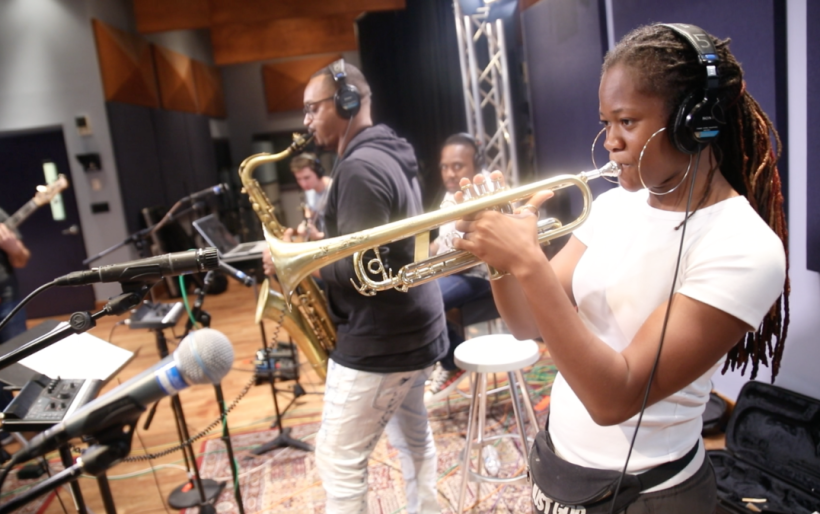 Arnetta Johnson and SUNNY | photo by John Vettese for WXPN

Camden, New Jersey trumpeter Arnetta Johnson doesn’t like being put in a box — not herself, nor anybody else.

On a recent Sunday night as we were setting up for a Key Studio Session, Johnson and the members of her band SUNNY got in a spirited debate over gospel music versus jazz music. First it was about which style was the originator — yes, we all know that the distinctly midcentury format of gospel was the launching point into soul, and then rock and roll, and jazz’s roots in the early 20th century predate all of that. But aren’t hymns and spirituals early iterations of gospel? And so if you consider them, isn’t gospel a precursor to jazz, and not vice versa? This went on for a while, and then the discussion shifted to which style yielded better musicians — was it jazz, whose players boast technical prowess and excel at innovation, or gospel, whose brightest stars connect in a massive way?

By the time we were ready to soundcheck, Johnson put a swift end to the back-and-forth with some on-point, on-brand wisdom. “Why do we have to think of ourselves as jazz musicians or gospel musicians?” she asked. “That’s putting a limit on what you do and how you sound. Why can’t we just be ‘musicians’?”

If Johnson has a goal of knocking down genre walls, it can be traced back to her high school days, where she was a standout of the Trumpet Chics ensemble of Camden’s P.A.C.E. program — a group that hones instrumental chops through lively arrangements of pop favorites. Based at the Camden Repertory Theater, the group aims to nurture musical talent, linking students with opportunities in the arts, in school and beyond. Johnson’s studies led her to Berklee College of Music in Boston, which led her to possibly the greatest gig ever for a young trumpet player — touring with Beyonce. Yep, that was her at Coachella, and in the Homecoming doc.

During the time she spent on the road with Beyonce, Johnson wrote and recorded her own funky originals — “Juice and Candy” was her debut single, followed by “I’m Just Sayin'” — that added a hip-hop and pop flare to her jazz-schooled tones. Last month, she released her debut record, If You Hear A Trumpet It’s Me, a set of songs infused with electronic textures, trap beats, and spacey arrangements. (Think of what Christian Scott aTunde Adjuah is talking about when he says “stretch music.”) The album title is also her goal: to have her own singular sound, to reach the point where listeners can automatically identify an Arnetta song by the tone of her horn.

“Just because I play trumpet doesn’t mean I do the usual,” Johnson says. “I’m automatically different, I’m an African-American female playing an instrument. And I think that’s lit! I rapped a little bit on the album. It’s dope.”

She’s casual and upbeat about it in conversation, but the more she talks, the more it’s clear how very serious she is in her mission. “I’m trying to change the perspective on instrumental music,” she says. “Basically I want to take it back to when Miles was out doing his thing. I mean, he was a pop star if you ask me.”

The album, and the live set that Johnson and SUNNY played for us this week, encompass her personality in its various facets: sometimes blunt and upfront, sometimes toned back and chill, sometimes in party mode, sometimes in laid-back homebody mode, always authentic. The band – an acronym for Sounds Uplifting Nobility through Notes and Youth — is comprised of Dennard Watson and Dan Rouse on keys, Russell Gelman on guitar, Nick Salcido on bass, Marlon Lewis on drums, Kevin Woods on trumpet, and Henry Tirfe on sax, and true to their name, their performance in this session shines, in all its various facets and complexities.

Watch Arnetta Johnson and SUNNY play “Take Me To IsReal” in WXPN studios below, check out a full audio archive of their performance, and catch them in person this Friday night, July 19th, at Chris Jazz Cafe in Center City. Tickets and more information on that show can be found here. Johnson and the band also play Philly Music Fest at World Cafe Live on Saturday, September 28th; details and festival passes can be found here.