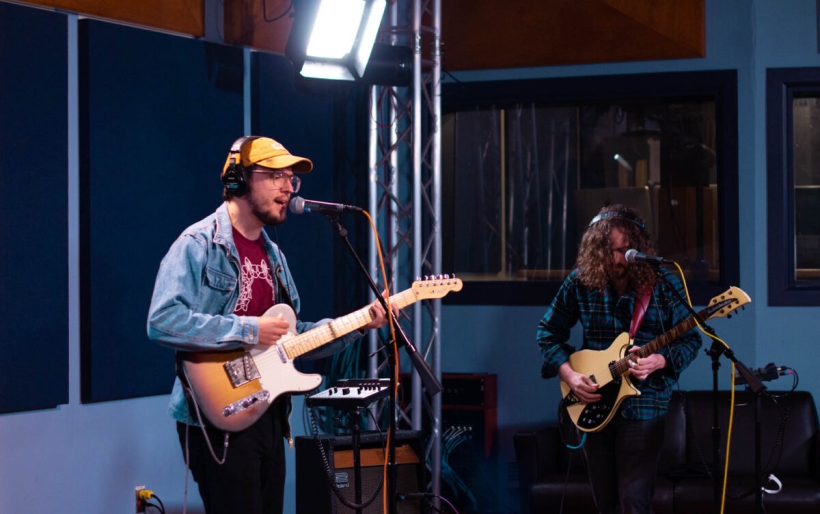 There’s a certain degree of mystique to the Philadelphia indie project Swim Camp, due in no small part to the hazy melodies and drifting tempos their songs are imbued with. Then again, this is a band that, when you Google their name, you’re met with more links to actual swim camps in the region than to their music.

The project of singer-guitarist and songwriter Tom Morris, Swim Camp been floating under the radar since debuting in 2017, building up their name in South Philly DIY show lineups and on stage at venue’s like Ortlieb’s in Northern Liberties. But with their beautiful debut album Barlow Hill, released this spring on Z Tapes, the band is beginning to surface.

Aesthetically, Swim Camp shares a lot in common with Philly basement scene hero (Sandy) Alex G — the midtempo pace, the distant drawl on Morris’ delivery, the minimal-yet-robust arrangements. But where Alex G’s songs tend to circle around themes of disgust and shame, Morris delves into the realm of sensory memory through a melancholic lens. His early single “Cool” was described for Earbuddy as being in part about “a park I used to go to when I was like 4 and how it feels to not be 4 anymore.” From the new record, “Pretty Bird” is a look at unhealthy attachment, and finding the correct way to allow love in your life. Some of Morris’ songs are lyrically direct and candid, others can put you in his headspace with a simple, repeated phrase — “should I drive us home?” evoking that feeling of concern and uncertainty that comes between two longtime companions.

Swim Camp’s Key Studio Session is rounded out by live performances “Flood” — find a video of that above — as well as “Over Me” from Barlow Hill. For the set, Morris is joined by his longtime live band of bassist Brian Sanderson, lead guitarist Mark Watter, and drummer Taylor Cullen (the latter two formerly of Howlish). In addition to their performance for this week’s Key Session, Philadelphians have two opportunities to see Swim Camp in person on August 5th. Morris begins the night with a solo Swim Camp set at Boot & Saddle opening up for Zac Clark of Andrew McMahon in the Wilderness (information here), and then hustles out to West Philadelphia to close the night with a full band set at Anthorna Gallery (details here).

Listen to the an archive of Swim Camp’s full Key Studio Session in the Soundcloud Player below, and check out Barlow Hill or order a tape over at Bandcamp .