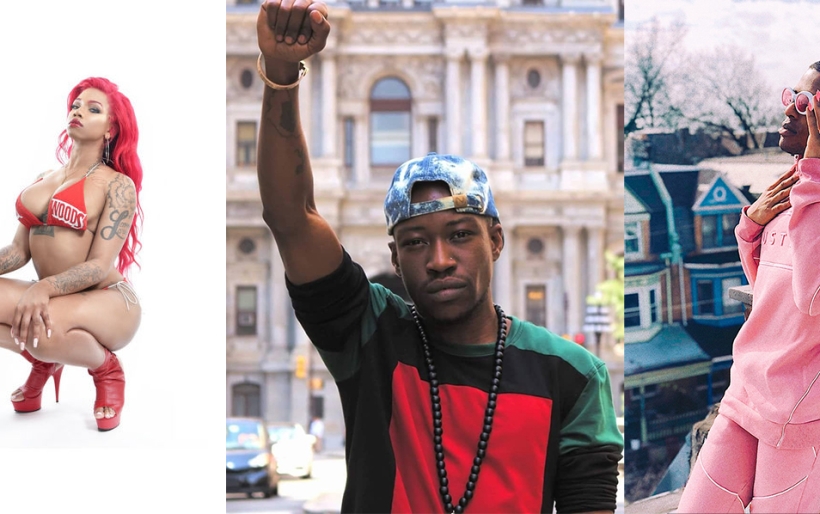 Blanca the Bawdy, Wordz the Poet Emcee, and DJ Delish will perform at SLAY

With encroaching political stratification and the looming presence of reactionaries in Trump’s America, safer spaces are becoming fewer and farther between, even in a sanctuary city like Philadelphia. Despite the city’s majority Black population and increasing representation of progressive, forward-thinking liberal politics with regard to LGBT inclusion and empowerment, members of said communities’ intersection often find themselves scraping by to find spaces catering to them. With movements like Hawkmoth Events, Metropolarity, Seltzer, and Juice, however, radical queer art with a focus on people of color has managed to not only survive the Trump years, but thrive.

This Saturday July 27, World Cafe Live hosts SLAY: A TPOC Artist Showcase & QTNB Dance Party, a production brought together by Trans Masculine Advocacy Network (TMAN for short) and the fledgling Phluid Social Club. Amidst all of the celebratory noise making and genre blending hijinks, is a central message of inclusion and empowerment. Says TMAN orgainzer Christian Lovehall, aka Wordz the Poet Emcee, “the showcase is the premier event under the new PHLuid Social Club, led by local Trans & Non-binary POC, that hosts community events “celebrating the fluidity of gender, art and movement…for the culture. With SLAY we aim to create an accessible and affirming platform where TPOC singers, rappers, poets, dancers, musicians and DJs can showcase their talent to our city. Most showcases that feature Trans artists in Philly are drag shows. And while drag is definitely a form of performance art, there was a need to create an exclusive space and platform, where TPOC artists of various mediums are celebrated, valued and affirmed.”

Featured artists on the eclectic bill are DJ Delish, a producer/singer/rapper/dancer whose recent album XP is a scorching neo-RnB exploration into future sounds; Blanca the Bawdy, a trans rapper with unparalleled sultriness that belies the edgy trap beats found on her tracks like “Make Her Dance”; and Wordz himself, whose powerful stage presence and true-school hip hop energy can be found on his 2018 banger of a mini-album Unapologetic.

The night promises good vibes and mission-driven partying, as the proceeds benefit Philly Trans March. As well, this is an important step in creating the kind of diversity we need as a music community. It’s a sentiment Wordz echos when he states, “There are very few opportunities where Trans artists can truly be their authentic selves, without being harassed, judged or ridiculed. For safety reasons, many Trans artists, like myself, have to perform ‘stealth’ in order to be ‘respectfully received’ in Philly’s music community. Things could improve if promoters, other artists and audiences embraced the intersectionality of which we exist, live and thrive and realized that all artists are multi-faceted gifted human beings who can indeed find common ground in simply being creatives.”