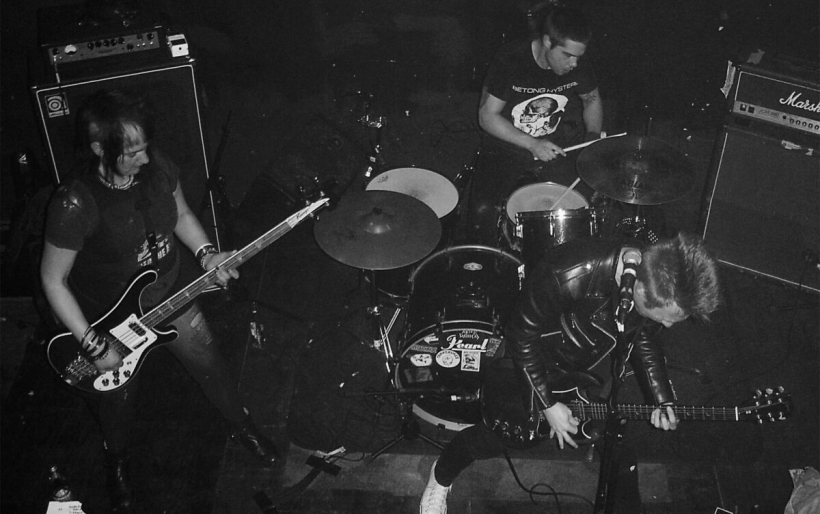 It’s Bootsy Collins day, Philadelphia! Time to beam right up to the Mothership, which today only is hanging out directly above Clark Park! There is literally no better way to start the month than chilling in the park, listening to some great music, soaking up some sun, and hopefully copping a sweet West Philly-themed Parliament-Funkadelic bootleg t-shirt. I know that Bootsy doesn’t play bass live anymore – doctor’s orders, unfortunately! – but he’ll be MC-ing the event, hopefully singing a couple tunes, and whatever, Brandford Marsalis is playing so I don’t want to hear any complaints. Also, it’s free. And in Clark Park. What more could you even begin to ask for?!

Before heading to the park be sure to stop by Common Beat Music just down Baltimore Ave. for their two year anniversary party. I was lucky enough to get to write the article about the shop’s grand opening and it’s been a pleasure to see them really come into their own ever since. The party will feature a ton of DJs from the community – including yours truly! – and T-shirt maven Perry Shall doing boardwalk-style heat transfer tees! The last time Perry brought out his giant collection of transfers was in Central Park at a Kurt Vile show last month and this is infinitely closer and also includes a Bootsy Collins gig just minutes away. 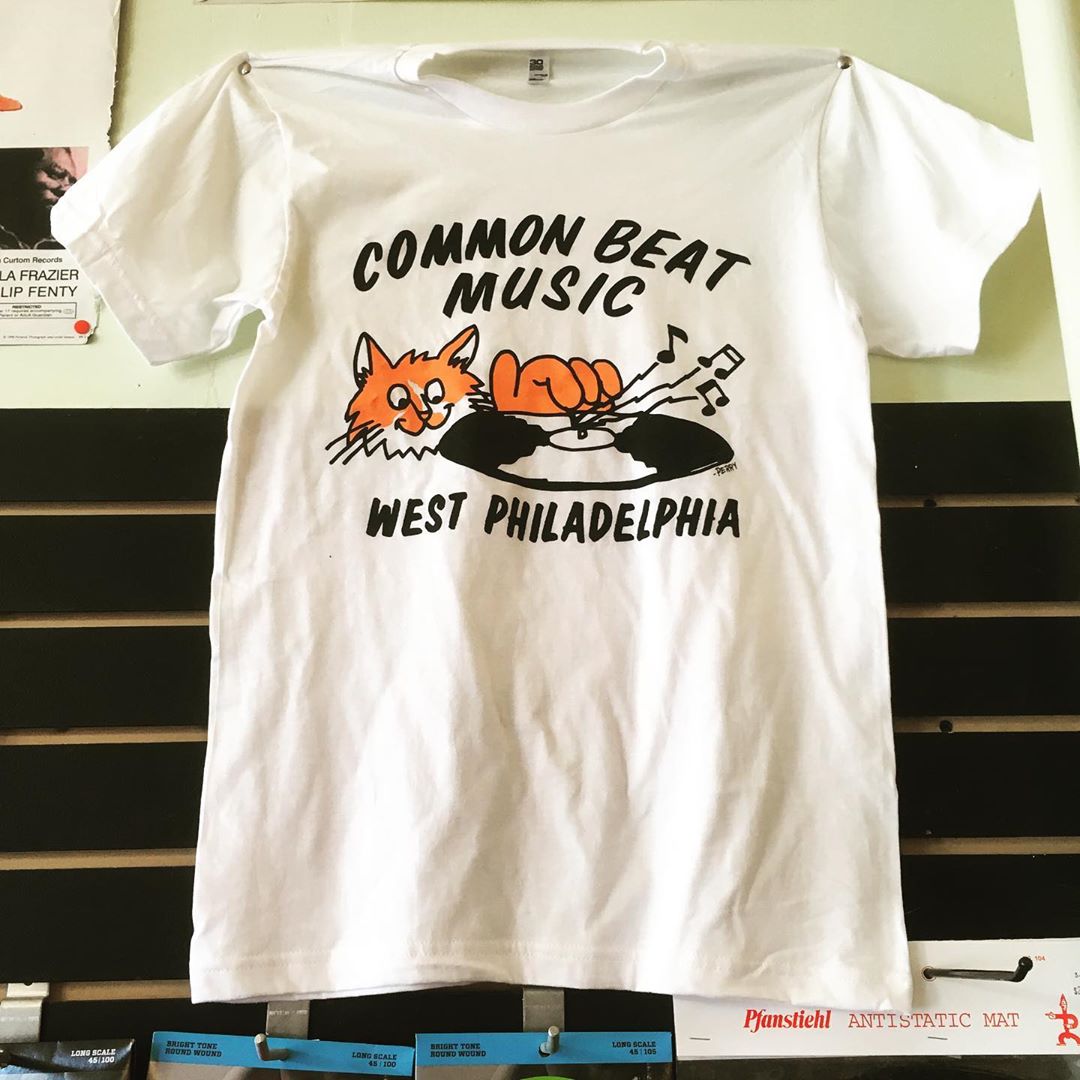 I apologize for the self-promotion so early on in my column. Usually I wait at least until the middle of the damn thing before sneaking something in but it’s my birthday this month so allow me a bit of fun. I’m turning 40, which means I’m officially old. I don’t really know what 40 means but as long as it doesn’t involve suddenly getting into Jimmy Buffett or spending top dollar to see bands from the 90s on perpetual nostalgia-driven reunion tours, I think I’ll be okay. Though let’s be real: most everyone I know who really likes Jimmy Buffett– I’m looking at you, members of The P’ids – is around 25 years old. “A Pirate Looks at 40” indeed!

Enough of this nonsense. Let’s get back to the calendar! Sunday night at the Khyber the always fantastic Dark Thoughts is playing with TVO and Big Nothing. This is just one of many shows happening at the newly-reopened upstairs space at the once-infamous venue that was turned into a restaurant a decade back. Read more about that here. The next night at Kung Fu Necktie is the exact kind of show I regularly saw at the Khyber almost two decades ago with three pummeling noise rock acts: Eye Flys, Pinkwash, and Fashion Week from NYC, which incidentally is members of bands that definitely played at the Khyber including Philly favorites Nakatomi Plaza. Be sure to keep an eye out – get it?? – for the Eye Flys album coming out on Thrill Jockey soon!

That Wednesday at Jerry’s on Front is the debut of Tecaddy and the Larbs, the new band from Rosali, Max Milgram, Eugene Lew, and Robert Botto. They’ll be playing with psych rockers 3ft from Detroit and the Columbus-based Jen Powers and Matthew Rolin dulcimer and guitar duo.

On Friday keep that Midwest energy going at The Rotunda with a show by Chicago stalwarts Cheer-Accident. The long-running progressive art-pop band – referred to in this review as “near the top of the ‘best band you’ve never heard of’ list” – just put out their 20th album since forming back in 1981 and it’s a scorcher. Note to self: maybe this getting old business is actually pretty cool! Opening up will be another Midwesterner, synthwave sweetheart Stressica on tour from Minneapolis, and Philly’s George Korein and the Spleen, who will be performing “a collection of songs about smartphones, birds, bees, mummies” and more.

Saturday night Neurosis is playing at the TLA. I missed them the last time they came through, which was also right around my birthday two years ago, but I’m hoping to make it this time. There is no such thing as a bad Neurosis show, no matter if they’re playing stuff from the first few more straightforward metal albums or their more epic and doomy later material. You should probably go to this. Related: I don’t have a lot of regrets but I will forever be upset that I didn’t go see them at the TLA back in 2003 when they toured with Jarboe. I wasn’t that familiar with Neurosis, I mostly thought of Jarboe as this weird goth singer – to be fair, I wasn’t wrong about that – and I probably already had plans to go see some terrible street punk band at the Killtime that night. I know Neurosis purists aren’t that keen on the collaborative album but I’m a huge fan and when I get my time machine working that’s going to be one of the first stops I make.

Sunday it’s my birthday. I don’t ask for much but if you wanted to tune into my radio show on WKDU that night at 10pm I’d appreciate it. You only turn 40 once, unless you’re like my friends who keep on having 40th birthday parties for some reason or another.

On the 13th head over to the Random Tea Room to see percussionist and tape-manipulator extraordinaire Evan Miller with two local duos: Veronica MJ and Matt Engle on bass and viola and Leo Suarez and Madam Data on percussion and electronics. Madam Data just played the Double Decker Music Series with Ursula Rucker in June, which is amazing, and you should definitely catch them whenever and wherever they play.

That Thursday is one of those perfect nights when there are four great shows happening at the same time in completely different neighborhoods across the city. I’ll be out in Schwenksville at the Philly Folk Fest– David Crosby! Preservation Hall Jazz Band! Yola! Dan Blacksberg! – but if I wasn’t I’d probably go down to Spruce Street Harbor Park to see Thin Lips play and Frances Quinlan from Hop Along DJ cause how can you go wrong with that? Well… there’s also that Nazir Ebo Group concert in Hawthorne Park in South Philly. I’ve seen the wunderkind drummer numerous times in the past couple years and it blows my mind that he’s still a teenager. But also there’s that final Circadian Rhythms show out in West Philly. Decisions, decisions!

The very next night at Johnny Brenda’s is the Northern Liberties record release show for Parallel Hell, the West Philly punk trio’s seventh album. I profiled the band earlier this year and if you’re going to this show – and you really should, especially since Evil Sword and Sour Spirit are opening – you should read up on the history of one of the most interesting and fun acts to come out of our fair city over the last two decades. 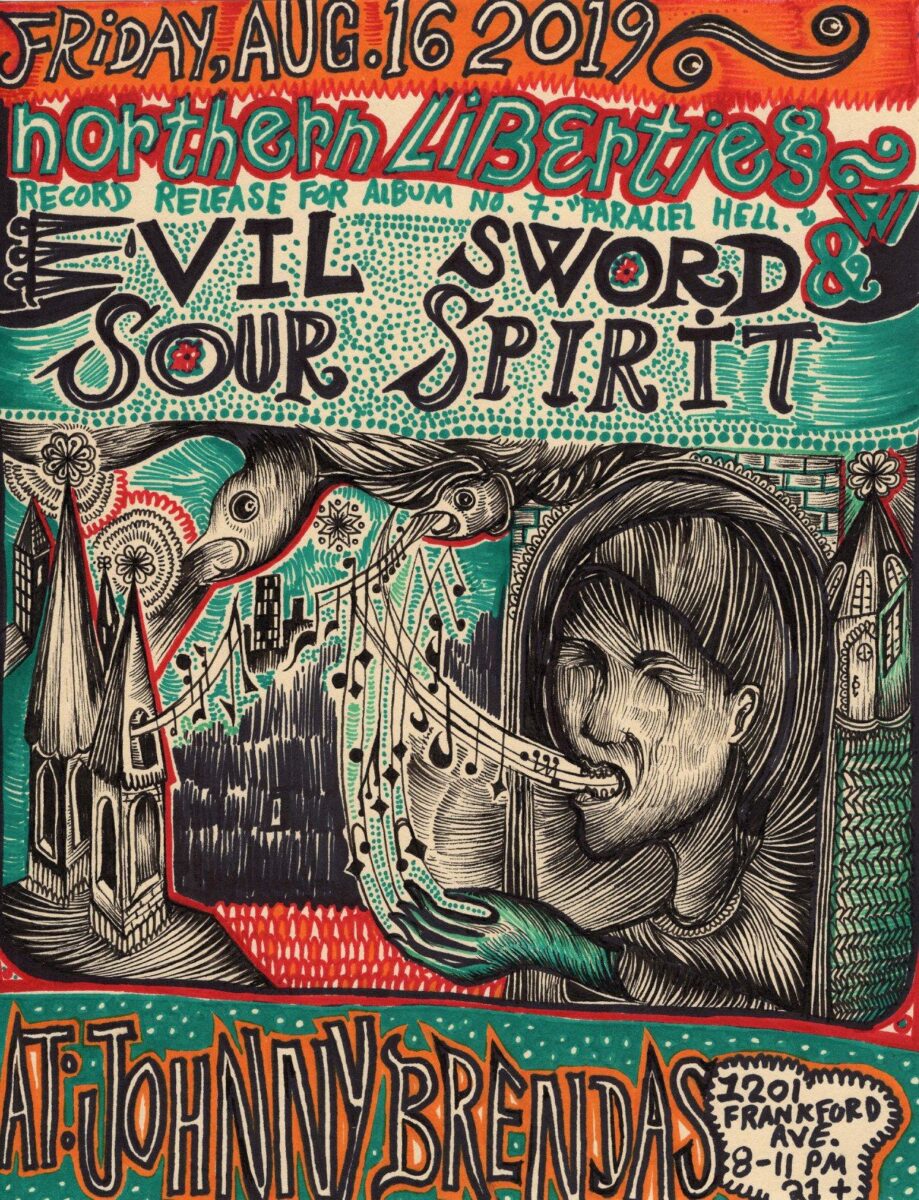 Aster More, one of my favorite Philly pop bands of the last couple years, is playing their final show at Boot & Saddle on Saturday the 17th with Gladie and the very fun Weekend Athlete. I got to see Aster More at their very first gig back at First Time’s the Charm 2016 and I’m very sad to see them go but I’m hoping all the members start new bands as soon as possible.

The next week kicks off on Tuesday back at Boot & Saddle with a fantastic post-punk show: The Mob, the classic British peace punk band that’s been around since the 80s, with local openers The Invasive Species and The Stutter. I’ve been championing Invasive Species since day one and have always contended they sound like a mix of The Gits and Poison Girls so I’m happy to see them end up on this perfect evening of music.

The Mob aren’t even the only English anarcho-punk band playing that week! The very next night Rubella Ballet are bringing their Dayglo-soaked tunes to Cousin Danny’s out in West Philly. Unlike The Mob, who have been through Philly many times, Rubella Ballet has never visited before, either back in the day or in recent years. While they played shows with Crass and other bands from that scene, Rubella Ballet were always very much doing their own thing, resulting in music that was just as much influenced by the goth rock of the time as it was by the peace-punk sound of their peers. It’s fitting that the two locals on that show, The Ire (profiled recently by our Alex Smith!) and Haldol (who made one of my favorite releases of 2017!), are also goth-heavy political punk bands that don’t easily fit into any genre boxes.

There are two events at PhilaMOCA that week that are important to talk about: on Wednesday and Thursday night they’re showing Murder in the Front Row, the new documentary on the San Francisco thrash metal scene of the early 80s that birthed bands including Metallica, Testament, Slayer, and so many more.

On Saturday the focus is on another rock n’ roll pioneer, Screamin’ Jay Hawkins. Maybe you just know “I Put a Spell On You” but Screamin’ Jay put out close to two dozen albums over a career that stretched from the 1940s until 1999, the year before he passed away. At PhilaMOCA that night, the author of a new biography about the legendary singer will be speaking about his life and career and then The Resurrection of Screamin’ Jay Hawkins Band – which includes Mike Armando, his guitarist from the 70s – will perform two sets of classic songs.

If you’re not going to PhilaMOCA that night you should head to the Mothership in West Philly for what is the final Impressionist show for the foreseeable future. The popular seven piece “psychedelic big band” will be joined by Likebirds and Key-favorites Hermit High Priestess at what is also one of the final shows at the Mothership for the foreseeable future, as the DIY venue is taking some much-needed time off.

Speaking of favorites here at The Key, we’re presenting a Jeff Buckley tribute concert the night before in honor of the 25th anniversary of his landmark album Grace. The ten tracks on the album will be performed by two house bands, Naeemah Maddox and The End of America, with guests including Curtis Cooper, Matt Duke, and members of Hardwork Movement and Ruby the Hatchet. This is definitely going to be a fantastic and memorable evening and a perfect celebration of a quintessential piece of music. 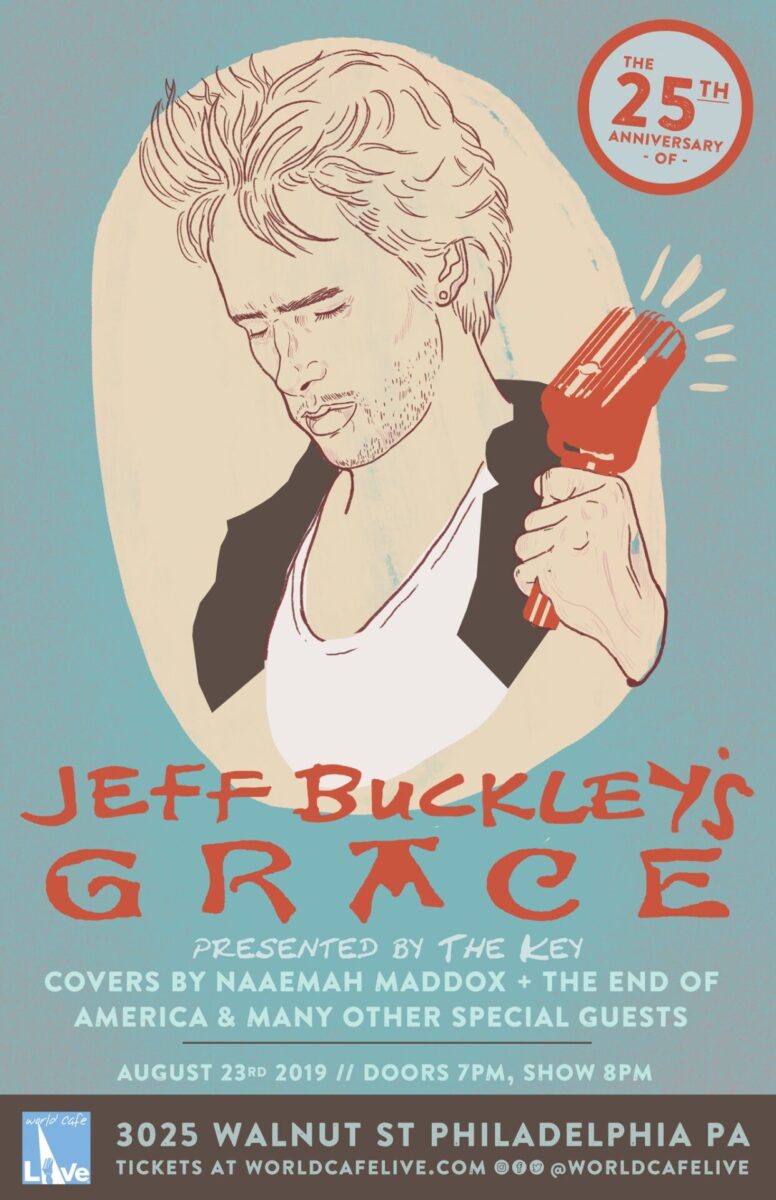 There are not one but two great shows that Sunday: on this month’s Double Decker Music Series bus ride you’ll get to listen to the tunes of Rosali and Seraiah Nicole while getting a great tour of the city, and at the more stationary PhilaMOCA one of my favorite current post-punk bands, DC’s Gauche, is playing with Deep Tissue.

The month comes to a close with a flurry of shows. Noisy rock n’ roll two piece Big Business are at Boot & Saddle on Tuesday with Hound; Wednesday is Radiator Hospital (full band!) with Outer Heavens and Yowler at JB’s; and Thursday is the kickoff of the annual YallaPunk festival which continues through the weekend with music, film, and more. The final show on my calendar is the return of Richmond heavy metal innovators Inter Arma whose new album on Relapse, Sulphur English, is unbelievably good.

Alright! That is it for August. Don’t forget about that SRA Records 10 year anniversary show on the 1st of September at PhilaMOCA with Flag of Democracy, Soul Glo, HIRS, Psychic Teens, and a bunch more. See you in the pit! And by the pit, I mean the group of old people standing to the side of the stage and trying not to get hit. I’m 40 now! It’s where I belong.

As always: send your hot tips, band demos, and more to @talkofthetizzy on Twitter.