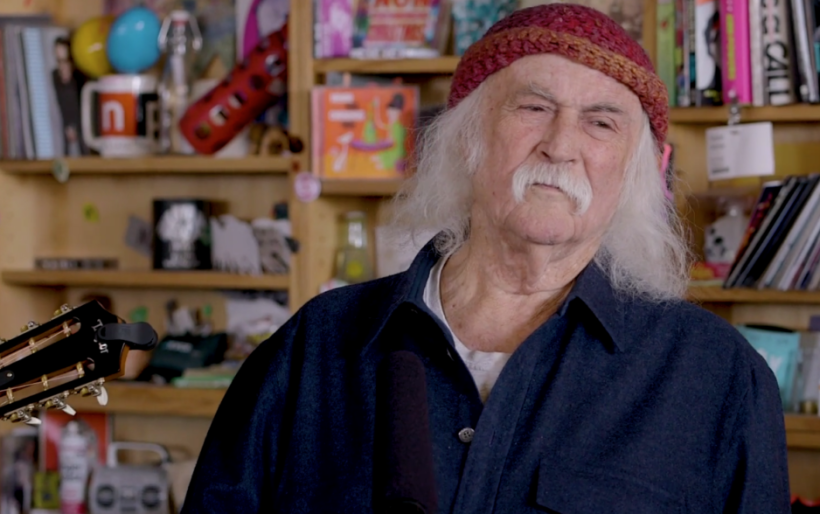 David Crosby has an undeniably youthful spirit. He has to considering his backing group, The Lighthouse Band, consists of musicians some 30 to 40 years younger than him: bassist Michael League, keyboardist Michelle Willis, and guitarist Becca Stevens. This week, Crosby and The Lighthouse Band brought a stellar set to NPR Music’s Tiny Desk Concerts.

The egalitarian political views Crosby has been known to incorporate into his music, are seemingly everpresent with younger accompaniment. On set, each band member is given a microphone and sings throughout the performance. Crosby feels no need to overpower his compatriots, which is admirable from such a seasoned artist.

When introing “Other Half Rule” a song from Here if You Listen, Crosby makes note of the track’s meaning. He says, “We wrote this to invite the women of America to please take over. It should be fairly obvious why, you couldn’t possibly do worse, so we think you can do a lot better”…a comment that reads as a not-so-subtle jab at the current state of affairs in the White House.

As David Crosby & The Lighthouse Band power through their setlist, they do so with a rare seamlessness. There are few if any words spoken between “What Are Their Names, “Looks in Their Eyes,” “Other Half Rule,” and the band’s cover of Joni Mitchell’s “Woodstock.” Despite being a rather new collaboration in the scheme of Cosby’s career, they have clear musical chemistry and mesh well together.

David Crosby & The Lighthouse Band are set to headline the 58th annual Philadelphia Folk Festival. They will take on the Martin Guitar Stage from 8:50 P.M. to 9:50 P.M. on Sunday, August 18th. Tickets and more information can be found at the XPN Concert Calendar.