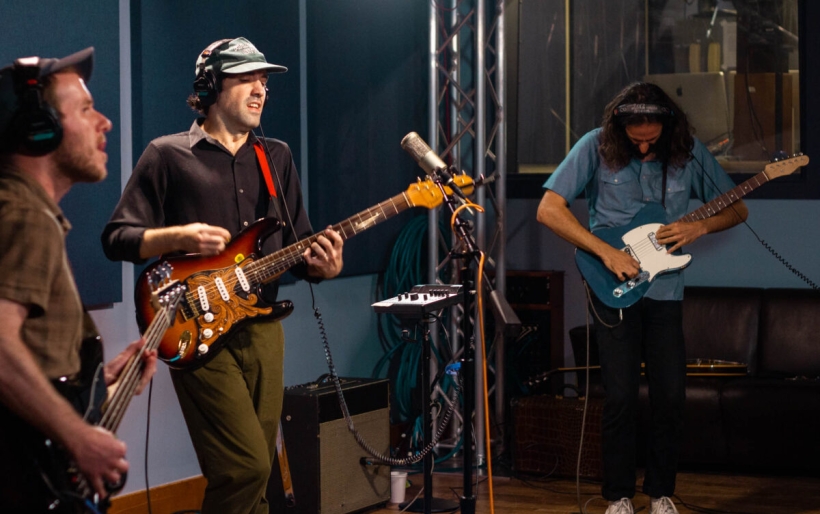 In a sense, American Trappist is the project of a single person: New Jersey’s Joe Michelini. He’s a rock and roll singer-guitarist who led the blog-popular collective River City Extension in his 20s, and more recently refocused his song-craft and existential dread into records like last year’s great Tentanda Via, which is as cathartic as it is uplifting.

But American Trappist is also very much a band, as we see in this week’s Key Studio Session, and to whatever extent Michelini is a blossoming producer (he recorded the most recent album by The Vernes at his home base of Berlin Studios) and the visionary behind the songs (though we’re reasonably sure he’s too humble to embrace the term”visionary”), it’s the skill and chemistry of his bandmates Shane Luckenbaugh on drums, Max Kulicke on guitar, and Lewie II on bass that brings the music to life.

We hear that in American Trappist’s studio work. And we see it when the band plays live, as they did at WXPN for this week’s Key Studio Session. They know when to hold back and allow the songs to breathe, as we hear in the breathless take on the new single “Holy Moses.” They know when it’s time for somebody to dip forward — Kulicke with a sick guitar lead on the rousing “Getting Even,” Luckenbaugh with a pointed drum fill on the punchy “False Prophet.” And they know when it’s collectively the moment for everybody to go all in, as we can see in this explosive performance of the Lennon-esque, Catholic guilt laden “Strange Days.”

Three of the four songs in this Key Studio Sessions performance come from Tentanda Via, an album that is very much worth some quality headphone time if you’ve not heard it already. Michelini is already done writing a new 11 track album called The Gate, which he hopes to release in the not-too-distant future. In the meantime, the foot of the stage is the best place to receive that American Trappist energy, and you have two chances to do so in the next month.

Tonight, the band plays House of Independents in Michelini’s old stomping grounds of Asbury Park; it’s an all-ages show with fellow New Jerseyans Deal Casino. Back in Philly on August 22nd, American Trappist has a 21+ gig at Bourbon and Branch in Northern Liberties with LUNCH. Find tickets and more information on both of those shows at the XPN Concert Calendar, and listen to American Trappist’s Key Studio Sessions set in full below.