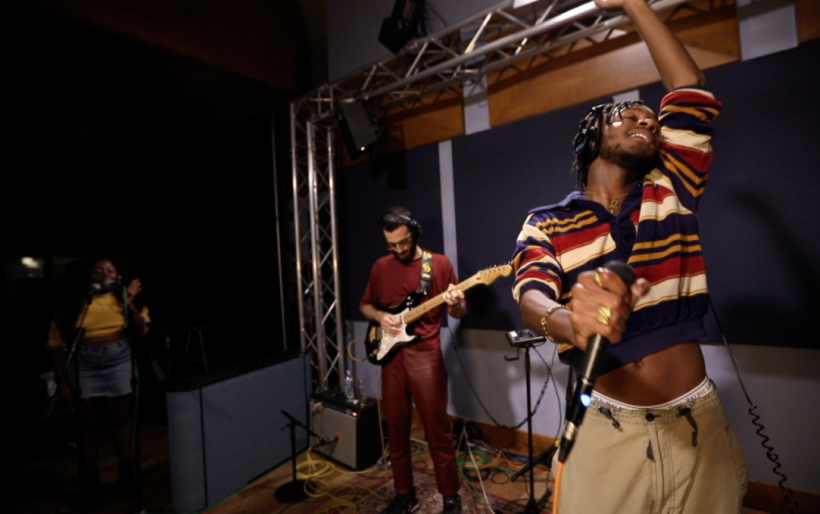 AnnonXL is a singer who can stop you in your tracks. From strong core melodies to vibrant melisma, teasing drops of pitch-shifting and a constant sense of passion and joy, he is a commanding force as a vocalist…not to mention as a charismatic frontperson and left-of-center songwriter.

The emerging Philadelphia artist caught our ear with his second project, last year’s Teen Angst album; this year he followed it up with a breezy EP called Summer Affair. While both releases have their roots in pop and R&B, they branch into unexpected directions — bubbling, dancefloor-ready electropop as easily as cloudy and cosmic balladry. Some moments vibe like house jams, others like Disney theme songs. In a way, AnnonXL makes music in the spirit of other unable-and-unwilling-to-be-easily-defined artists — Prince to Frank Ocean to James Blake — and with a new six-piece band joining him for this week’s Key Studio Session, the sound and style expands even further.

Supporting vocals are provided by fellow Philly artist Leeyuh Neptune — about whom Annon’s mix notes included the phrase “ethereal space princess,” which should give you a good idea of the set’s overall cosmic vibe — while Mulch Aikens plucks sleek basslines and Garrett Burke keeps the beats tight on acoustic as well as digital drums. The instrumental leads shine, with C.J. Williams-Inniss delivering sparkling keyboard phrases and Danny Murilly working gnarly guitar licks. Rounding the band out is Richard Phillip Smith on sampler, taking audio snippets from the vocals and room and processing them into trippy flourishes; he’s the Brian Eno of this organization, if you will.

AnnonXL is the star of the show, though, and we hear that from the moment he begins to sing on the soulful “Flowers.” His voice navigates chord changes that travel in unexpected, theatrical ways across its three minutes, while the playful “Berries and Champagne” has a glorious 90s bump that finds him employing a breathtaking falsetto. “Drought.” from Summer Affair has some serious drama and urgency to Annon’s delivery and the band’s mood — the arrangements feel prog-complex at points — while the joyous “Canary Yellow” shifts the dynamic from contemplative to overjoyed, and Leeyuh steps out from behind the mic to dance with Annon to a song that’s about finding connection through movement. And that’s the overarching theme in these songs: love — finding it, holding on to it — and you’re going to love what you see and hear.

Watch two videos of AnnonXL and his band playing live at WXPN below, and listen to a full audio archive of their Key Studio Sessions performance; if you want more, make plans to see them this Saturday night at Johnny Brenda’s, where they open for Sitcom. Tickets and more information can be found at the XPN Concert Calendar.