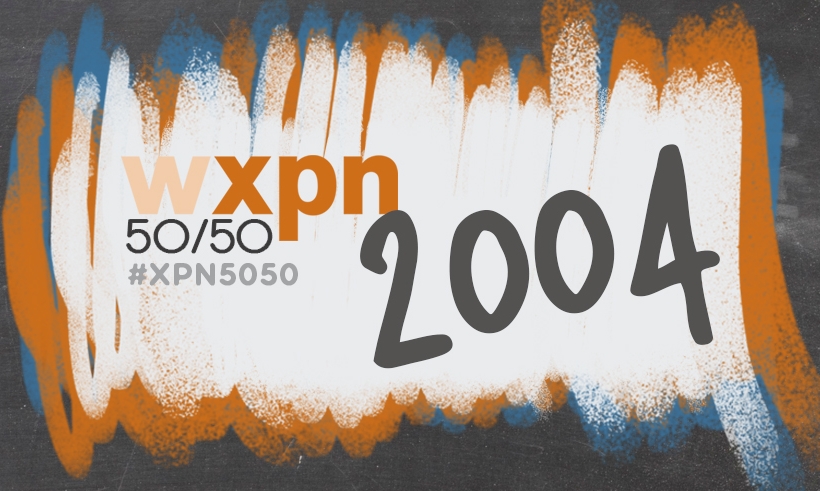 For fifty weeks this year, we’re celebrating the music of a specific year every Saturday on WXPN. We’ll be choosing the years randomly; for this week’s #XPN5050, Julian Booker is putting the musical spotlight on the year 2004.

AhhhhhhhhhhhhhI’M COMING OUT OF MY CAGE AND I’VE BEEN listening to the records that we had on repeat 15 years ago. This week, for a spotlight on 2004, it’s all about the beats and bravado of Franz Ferdinand, Kanye West, The Killers, and Modest Mouse. We’ll hear sky-high anthems from Arcade Fire, raw indie rock burners by The Walkmen, and contemplative ballads by Mindy Smith.

Looking for folk-pop? How about Feist or Nellie McKay. Some orchestrated indie rock? Regina Spektor’s Soviet Kitsch, coming right up. Some funky love jams from Prince? Of course!

On TV, Friends and Fraiser ended while Lost, House and Desperate Housewives began, and there were at least two CSI’s in the mix.

On the big screen, Eternal Sunshine of the Spotless Mind welcomed the dreamers, Anchorman had us rolling in the aisles, Million Dollar Baby racked up the acclaim, and thrill seekers sought out the conclusion of the Kill Bill saga.

Take a listen to the sounds of 2004 in the Spotify playlist below.