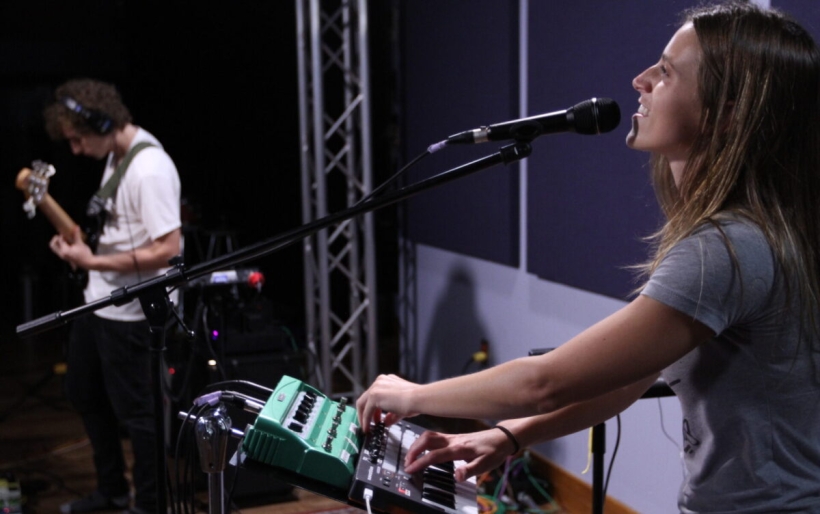 They’re rigorously schooled musicians, but as their name suggests, Great Time likes to have fun. Back in the early teens, vocalist Jill Ryan, guitarist / bassist Zack Hartmann, and drummer Donnie Spackman connected in New York City, where all of them were jazz students. They loved the music they were absorbing in class, but they also wanted to do their own thing. So after graduation, they moved to the Philadelphia burbs, built a home studio, and began writing electronic pop songs in the vein of Twin Sister, Sylvan Esso, and Little Dragon.

Watching the band live, the duality of their identity is very evident. As Spackman kicks out nuanced rhythms via kit and sampler, Hartman builds layers of sound on guitar and bass, and Ryan juggles singing, keys, sampler, flute, and saxophone, there’s no denying the amount of talent and training the trio possesses. But Ryan readily jumps into dance moves at the mic; Hartmann and Spackman cue one another with playful expressions. They’re intensely focused, but loose, and for more evidence of such, consult their music videos, which are often lighthearted and irreverent.

Last year Great Time released its debut, Great Album, and has been hitting the Philly scene hard since then, appearing on gigs like Arc Iris’ MilkBoy headliner last year, Kingsley Ibeneche’s record release at World Cafe Live this year, and SoFar show or two. This Saturday, they’ll play Helen Leicht’s XPN Local Showcase at the Philadelphia Folk Festival camp stage. While their music is not “folk” by most traditional definitions, that’s okay — they’ll make it work, and make it fun, a set worthy of their name.

In addition to tomorrow’s Folk Fest gig, Great Time also performs Johnny Brenda’s on August 29th, opening for Res. Tickets and more info on both shows can be found at the XPN Concert Calendar; watch Great Time perform “That 70s Song” in XPN Studios and listen to their Key Session in full below.