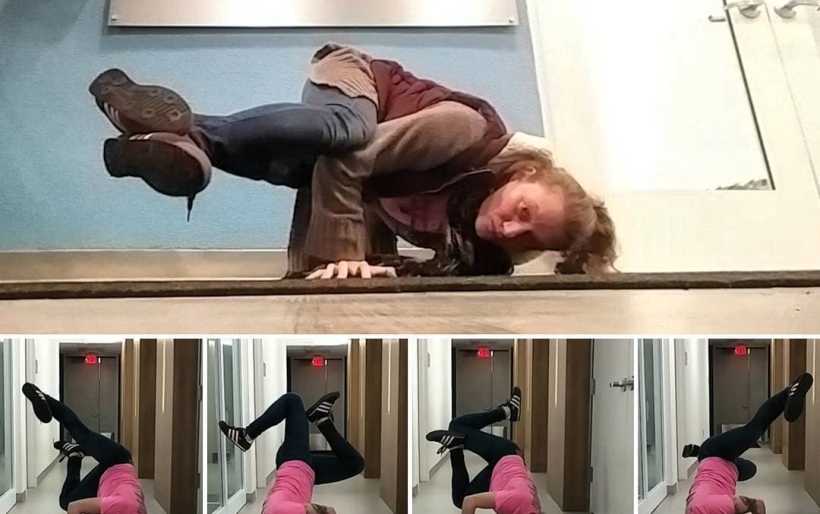 Michelle Caroline Lerner and the science of breakdancing

Much of Michelle Caroline Lerner’s life revolves around the art of dance. Skilled in everything from pole to belly dancing, Lerner is also an accomplished B-girl making a name for herself in the ultra-competitive world of break dancing. As a complement to her work as a dancer, Lerner is a graduate student at Temple University working towards her Ph.D. in Neuromotor Science.

Much of her work is intended to explore the deep connections between dance and human brain function. What happens to our brains when we dance? How does rhythm and dance change how we perceive the world and interact with each other? We sat down with Lerner to get some insight into the role that movement plays in unlocking some of the deepest mysteries of the human mind.
The Key: Could you tell me a little about your background, mainly how did you get started in dance?

Michelle Caroline Lerner: Dance has always been a part of my life. My grandmother used to joke about how I would endlessly ask for them to play the (Michael Jackson) “Beat It” record, which came out the year I was born. My family is musical and we always danced at family events. I went to all the dance parties I could find as a teenager. More recently, I’ve been taking a more serious approach to learning specific dance styles.

TK: Word. I peeped through your social media that you’re a really versatile dancer, exploring multiple styles. How did you first get into breaking specifically?

MCL: For reasons, I spent a portion of my life outside of any dance scene, but once a dancer always a dancer. So one day I was doing yoga hand balances and starting thinking about breaking, I’m not really sure. But I thought to myself that it’s a style that I should have been into but when I was a teenager I wasn’t connected with anyone who was doing it. So in 2013, I started looking for the scene in Philly and looking up tutorials.

TK: That’s interesting. How was it when you were first venturing out and immersing yourself in the scene in Philly? What did you find at first and what is it like for you now?

MCL: There was a Red Bull event in 2014 that I attended which was my first event and I had no idea how many people were involved in breaking. There was about seven cyphers [dance circles] going on at once. Then I found out about The Gathering and Second Sundae battles were where I met the Philly breaking community. I was very intimidated at first by the level of athleticism. Breaking is a very aggressive dance and so it took a long time for me to get over the intimidation. The biggest thing that has changed is my understanding of breaking as a dance, my understanding of the history of it and my understanding of the technique. So now I can have confidence, despite how aggressive it may be.

TK: Word. And you dance competitively, right? Could you talk a little bit about that and share any thoughts or feelings you may have about breaking as a competitive sport?

MCL: This is a huge topic, for many reasons. Breaking has always been battle-oriented. Today that orientation has made it to the big stages, including the Olympics. There is a fair bit of controversy around that. But I will defer to the thoughts of my mentor, Alien Ness, President of Mighty Zulu Kings, who literally wrote the book on battle. For him, seeing this dance that was just a street dance kids were doing outside his window in the Bronx projects make it to the Olympics and give this new generation an opportunity is a dream come true. To him, that’s like seeing himself or his children in the Olympics. People have concerns about judging systems and how the culture might be influenced, and there are lots of discussion of that. But if anyone wants to know about battle strategy I would suggest they read The Art of Battle by Alien  Ness.

TK: Wow. I’ve never heard of that book. I’m going to search it out and grab a copy. Switching gears a bit, can you tell me a bit about your work with neurology? What exactly is the discipline you study and work it?

MCL: He has them available for sale. I’m a grad student aiming toward a Ph.D. in Neuromotor Science, basically everything the nervous system does in connection with movement. There are many scientists who think that the brain evolved in order to move and interact with the environment. Furthermore, our perceptions of the world is a product of our embodied experiences, which includes movement. While we have drive to move from before birth, movement is learned. Dance is an important aspect of every human culture. I’m interested in how movement is learned, how that influences our perception, how movement is used culturally, and how the brain accomplishes all the things associated with all of that. Rhythm plays an important role, both in coordination of movement within an individual and between individuals. This rhythmic coupling between people is thought to function to increase social cohesion.

TK: This is fascinating to me. I’m especially interested in the connection between movement, music and social cohesion. Could you elaborate on that a bit? What are some of the ways in which dance specifically encourages social cohesion?

MCL: Through this rhythmic synchronization. It’s called “entrainment.” Studies with infants have shown that infants will show prosocial behavior if they have been bouncing in sync with the person but not if they are out of sync. But I think it goes even deeper. We are creatures of intention. And it’s very basic to read body language. In dance, you get the rhythm and other musical feature accompanied by movements.

What is so interesting to me is the way that you frequently see dance circles in various cultures and there is an exchange. Individuals are reading each other’s movements and storytelling or surprising their audience. So on one level we already know that certain physiological measures will sync up when a group is making music together or dancing, but I think the deeper questions need more investigation.

TK: Wonderful. And what initially made you want to investigate this connection between dance and brain function? Also, could you talk about the clinical trials you’ve been putting together?

MCL: I just always wanted to study the brain because I’m interested in human behavior and my passion for dance drive me in this direction. It’s not a clinical trial, but it is research that hopefully will form my Ph.D. work, but I have a few challenges still. I’m mainly looking at how different breakers evaluate different criteria of performance based on their own level of exposure to breaking. I’m using the criteria that were used for the Buenos Aires Youth Olympics Breaking battle. I’m also interested in the use of imagery by breakers.

TK: Word. The use of imagery? Could you elaborate on what that means?

MCL: Often times in learning movements, athletes or dancer will try to imagine the movement. This can be visual (internal or external perspective) or kinesthetic (they imagine what the movement feels like).

TK: Ahhh, I understand. Lastly, could you sum up what you hope to learn with the trials and with your studies in dance and brain function in general?

MCL: Exactly what I was getting at earlier. I want to probe some of these deeper questions. How does the brain change with movement training? How does that influence how we see the world? I feel that coming at these questions as a dancer first and then a scientist gives me an advantage in how I pose my questions and how I see the nuances.

I was just at a conference for the Society of Music Perception and Cognition and it was awesome to see so much happening at the intersection of science and art but I think we still have a far way to go. We are not going to use science to count how many syncopations make a song funky. Art is creative, not formulaic. But creativity is something that our brains facilitate for us. And I think we have a bunch of interesting tools that can help us figure some things out if we ask the right questions. Certainly, anything that helps to develop novel treatments like music or dance therapy would be great. We know that dance prolongs life. I think we also know that dance makes that prolonged life a happier one.