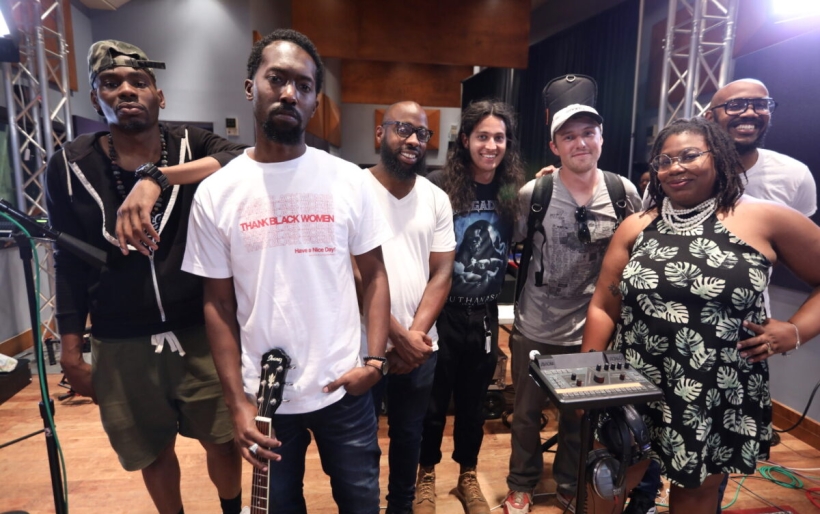 I try not to be one of those old heads who bemoans the decline of lyrical hip-hop in the 20-teens. Partly because I believe there’s every bit as much skill and relevance in the earworm hooks and psychedelic vibes that have the younger generation of rap fans enthralled. And partly because I don’t think it’s true lyrics-forward rap has disappeared, not by a longshot…not as long as Kendrick, Noname, Saba, Tierra Whack, and others are packing anywhere from clubs to festival fields.

Add Khemist to the current crop of MCs who dwell in their verses as much as their hooks. He’s a rapper from Philadelphia — specifically from the Logan Valley section of North Philly, a neighborhood he reps hard — and he’s been on the scene for the past five years, impressing us here at The Key with both an opening set at Lauryn Hill’s Electric Factory gig in 2014 and his All In A Day’s Work project, recorded and released over the course of 24 hours and documented feverishly on social media in 2016.

This year, Khemist has been hard at work on his latest project, Khemtrails, and it was announced this spring by the unstoppable seven-minute single “I Been On A Budget,” an incredible cut about frustrations with stifled creativity and microaggressions at the 9-to-5 grind, and from the opening snare drum hit, it is rapid-fire bars on bars on bars, even when it detours into funky instrumental arrangements and, yes, a hook that stays with you.

It’s no surprise that I heard this song piping from the Philadelphia Museum of Art’s speakers during the Def Poetry Jam reunion earlier this year; it’s also no surprise that the first gig that I saw Khemist play with his outstanding new band was a Kimmel Center show curated by celebrated Philly poet Ursula Rucker, who shared a story about how Khemist used to email her all the time during his college days, asking her to speak at his school. Words are in Khemist’s DNA, whether it be the words on the page of a favorite collection of verse or the words at the microphone during a high-octane cypher.

We hear that six-piece band in this week’s Key Studio Sessions performance, and it includes vocalists Elle.Morris and Ron Draper, drummer Anwar Marshall, bassist Scott Ziegler, guitarist Simon Martinez, and turntablist DJ Malc Geez (from the Q Show on Fox and Power 99). Together with them, Khemist makes five songs from the forthcoming Khemtrails come alive in WXPN’s performance space.

Watch a roof-raising performance of “Khemist Bombaye” below, and listen to a Soundcloud archive of Khemist’s entire Key Studio Session, lovingly mixed by Philly’s Micah Forsyth.