The Key Studio Sessions: Arthur Thomas and the Funkitorium - WXPN 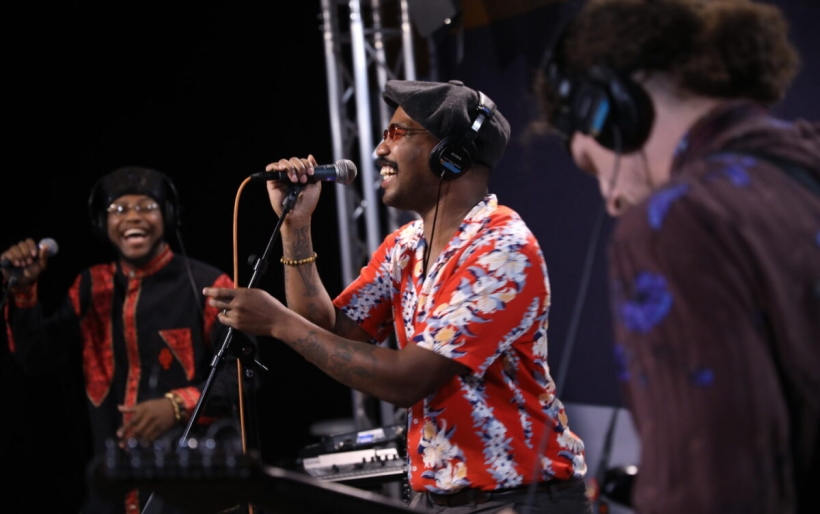 Arthur Thomas and the Funkitorium | photo by John Vettese for WXPN

The Key Studio Sessions: Arthur Thomas and the Funkitorium

The band leader of West Philadelphia’s Arthur Thomas and the Funkitorium made a small disclaimer before launching into “Get On the B Train” in WXPN studios. “Somebody thought this was a cover, and I just explained to them that it wasn’t. It’s not a cover, it’s an original joint.”

That just goes to show how locked into the classics this five-piece band is: “B Train” rattles and rushes with a ragged energy reminiscent of James Brown. Mixing up originals and covers, R&B and rock, the band had our crew captivated for an all-too-brief twenty minutes during their Key Studio Session this week.

Thomas and co-collaborator / hype man RE-MUS founded The Funkitorium this spring, and busted out the gate with the suave Anderson .Paak stylings of their debut single “Butterfly Loco,” a slick performance of which opens their set. A well-played cover of Earth, Wind, and Fire’s “Reasons” follows, and on it we hear RE-MUS take an incredible lead vocal turn — his falsetto at the 3:30 point will make you cry. Also in the mix is a swift and energized rocker “How You Like Me Now?,” which bears no relation to the hit by The Heavy beyond its driving spirit (watch a video of that one below) and a closing mashup of The Isley Brothers’ “Climbing Up The Ladder” with the original “Rolling Stone.”

This summer, Arthur Thomas and the Funkitorium were victors at World Cafe Live’s Beta Hi-Fi competition, and packed the house at the upstairs stage with a fire set; as a result, they won a slot at next weekend’s Philly Music Fest, performing first to kick off the festival on Saturday, September 28th. Get tickets and more information on the show at the XPN Concert Calendar, and check out the Key Studio Session in full below.