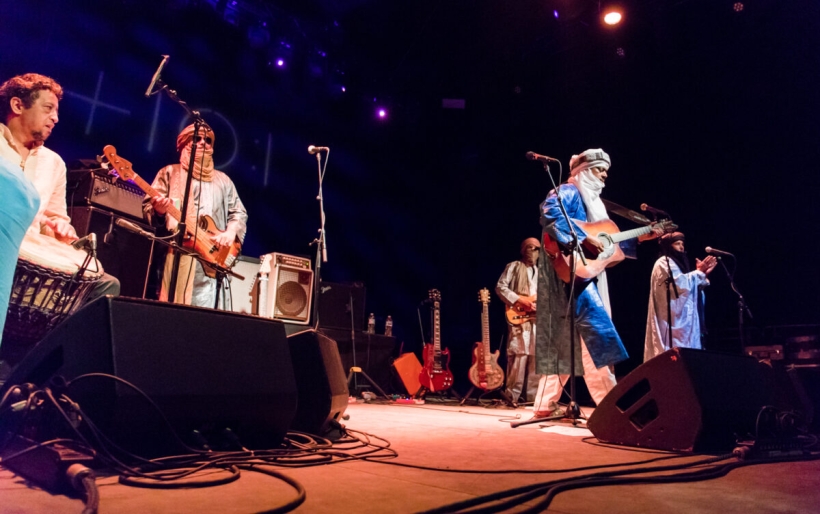 The first thing to know about any gathering of an audience and Tinariwen – the six-to-nine piece Tuareg rock ensemble from the Sahara Desert region of northern Mali – is that each show is a celebratory cross between a holy, somnolent mass and a mad hooligan football party.  Depending on the tenor of the tunes and the interaction of the band’s membership with the crowd, there’s a mix of silent reverence and zealously enthusiastic hollering to be had – something beautiful and cool considering that the Union Transfer crowd was made up of mostly Caucasians yelling and wildly applauding their Mali brethren for every lick and dance step.

That sense of community between players and audience might have much to do with the impactful and subtly dramatic sound of Tinariwen – its tangle of grungy, clicking guitars, its deep, swallowing bass lines, its dreamy and insistently undulating rhythms.

The night’s selection of Taureg language songs – whether something tonic and soft such as “Imidiwan Win Sahara” or rough and tumble such as “Amalluna Kal Waten” – were airily dense and hypnotic jams, made bite-sized, compact and concentrated. Such compactness, driven by the mysteriously Middle Eastern swirl of its melody, is something akin to what American artist Chuck Close does with his pustules of paint, in that there is more tension and information within the concentric circle of songs such as “Amassakoul ‘n’ Ténéré” and “Matadjem Yinmixan” than there is in any opera currently running in O19.

All  of that tension and community and jamming magic made Tinariwen’s moody, wifty desert song something Grateful Dead-like and majestic without ever seeming lost in the bramble. And, perhaps that pulsing sonic vibe of mini-dreams and mass hypnosis a la the Dead carried into the union of souls that was a Tinariwen-ian event. The feeling of all things Dead extended into the division of labor among Tinarwien’s singing, electric guitarists – the shaggy haired Ibrahim Ag Alhabib, the dancing Alhassane Ag Touhami – and acoustic guitarist, vocalist and dancer Abdallah Ag Alhousseyni.

While the slow, ragged and low slung “Chabiba” was an exceptional showcase for Ibrahim Ag Alhabib’ deep, craggy voice,  lighter moments such as “Talyat” were exquisitely tuned into Alhassane Ag Touhami’s smoother, soulful tones. No matter which of the three singers started a song, the men of Tinariwen joined in for a rousingly joyful choral of backing vocals. Only the never ceasing or slowing percussionist Said Ag Ayad, busy with rolling pulses, and hard-to-manage polyrhythms, didn’t join in on the singing. He had work to do.

By the time, Tinariwen got to near-close with the pensive but propulsive “Tismetten,” it was as if a ritual procession was closing down rather than, say, a concert was ending. And with that, you felt healed by the ancient emotion of it all, despite not quite knowing what its lyrics meant, or what its high musical priests thought of its minion. Communion is funny like that. It’s all just a feeling.