Witness To History, Looking To The Future: A conversation with photographer Mick Rock - WXPN 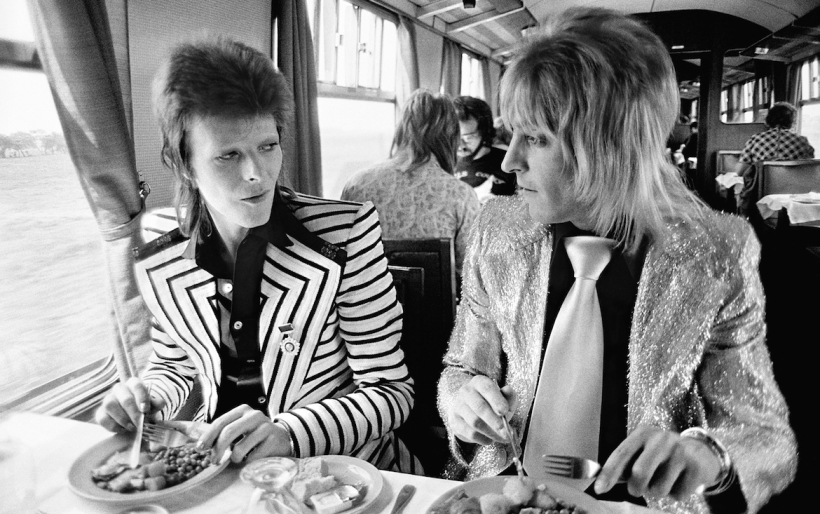 Witness To History, Looking To The Future: A conversation with photographer Mick Rock

By A.D. Amorosi
October 07, 2019
12:10 PM
Share
There aren’t many photographers who are as famous for their artistic signatures as the subjects they shoot. Or for as long. But British expatriate photographer Mick Rock is synonymous with David Bowie, Lou Reed, Freddie Mercury, Debbie Harry, Iggy Pop and Syd Barrett, having snapped their most renowned photos, captured their most notorious poses, and all but crafted their most still-resounding images. That he continues to do this with models such as Kate Moss and actors such as Benicio Del Toro shows too that Rock is not stuck in the past, but rather still shaping the look of the future. While Rock has exhibited his 70s vintage works in extensive gallery/museum shows, as well as pricy published catalogs and the 2016 documentary Shot!, the best way of seeing the photographer’s works is to hear him.

So, together with NYC’s Morrison Hotel Gallery and American photographer Henry Diltz (known for his 70s shots of dusty West Coast superstars such as The Eagles and Linda Ronstadt), Rock will appear at City Winery, October 8, for a little show and tell. “They’ll pull the photos out, and I’ll talk about them, love” said the ever-charming Rock, in his deep crackling baritone, discussing the element of surprise that marks all of his live showcases – to say nothing of his finest snaps.
The Key: We’re glad you’re on your way to Philadelphia.

Mick Rock: I was there three years ago to shoot Patti Labelle, Miss Philadelphia. She was fabulous. A very sweet lady. Talked to me about cooking. Mentioned how she had fed he Rolling Stones there, many years ago. It’s one of her talking points. A very nice house. And a very nice afternoon, I might add.

TK: Commodifying what photographers do beyond their initial moment – could be publication, could be exhibition – would you say it’s more crucial than ever to diversify what you do, and find different additional ways into making money as the internet basically just steals photos, and everyone else uses their cellphone to capture images?

MR: It might be different for me. I don’t know how other, younger photographers do it. I have a huge swag of images, and I could live off of that if I wanted to. I moved from London to New York City in the 70s when it didn’t cost much to live here, so there’s that money. And also, there’s the fact that everyone is a photographer now, God bless them. If I go out now, I take a phone and shoot. If you want me to bring my camera, you’re going to put silver on the table, darling.

TK: Your camera never left your side in the old days.

MR: No, love. I shot everything that wiggled. It’s a different world today. Everything is digital. Which I like. I’m all for digital. It’s so easy and convenient.

TK: Weird question, but do you miss the thrill of the darkroom?

MR: Do you want to know the truth? I did print in the early days. The Syd Barrett stuff, maybe the earliest Lou, Iggy and David stuff – I actually did process film myself. I definitely did process Lou’s Transformer cover. But I was never really into being in the dark. Running around like a wild boy was more for me. By the time I got to Queen, which was really late ’73 when I did that first studio session, I wasn’t processing anymore or making prints. I discovered that if you had an extra dollar or two, you could pay other people to do it for you. I like that much better. What got me excited was being in the middle of the action. That really stirred my eyeballs.

TK: Who have you been most excited to shoot as of late, and what really got you going about it?

MR: It could be any number of things. But once you’re in the ring with them…I don’t really do concerts anymore. What’s the point? The pictures have no real value. Everybody is taking the same photos in concert. I like the one on one. The excitement of it all. I like being in the middle of the pot, and stirring it. Benicio Del Toro. Have you seen Sicario? It was an amazing film, and I was so excited by him in that that I had to find a way to shoot him. We met one night, and he happened to know my work. He’s into music, He didn’t really want to talk about acting, he wanted to discuss music. He was a big Lou Reed fan. I’m also looking forward to shooting Lenny Kravitz soon.


TK: You sound as if you prepare yourself for the adventure.

MR: Always did, in some way. going back to the every earliest days. I might have been really high during the Syd Barrett days, the days of LSD. I would shoot anything. By 1973, I had a studio of my own, bang right in the middle of London in Leicester Square. Now, I have a spot and I do meditation, do yoga before a shoot. Kundalini. And lots of power breathing and chanting. Nowadays, I even get a massage before I start shooting, so that when I start, I’m primed. I’m ready to roll. I’m a hitman. I’m going to take you out one way or another, I prefer to do it nicely.

TK: You’re talking about mixing it up. Past and present, is it very much a director / subject thing, or do the roles change and lines blurred once you’re in the ring? I know you studied Stanislavsky.

MR: That’s right, I didn’t study photography in school. I had a roommate who was an actor, a budding actor, who turned me onto An Actor Prepares, and the godfather of method acting. He talked about going in to the raw space and building the circle of concentration. After a while the pictures almost seemed to take themselves. I became a conduit. That’s quite a buzz having that feeling. You have to be open to all possibilities. The smallest hand gesture cld be the key to a hundred different things, It sounds a bit esoteric, I know.

TK: Not at all. It must be second nature by now, but, how do you know that GOT IT, that you captured THE SHOT? Do you feel it? Do you see it when you see in through the lens?

MR: I smell it. There’s a certain odor it gives off. I might not always be able to smell or sniff out the definitive shot, but I can tell when I’m near. I like to shoot quite a lot of images. I can feel it in the energy in the room, electromagnetic ways. It’s connecting with their energy. This thing.

TK: Are you pulling the soul from the subject or the aura?

MR: I’m not after the soul. I’m after the aura. I don’t know about going so deep. In many cases, I’ve only just met you. So I’ll take the aura.

TK: You mentioned Lou Reed. There was always one thing about him – I GOT the drama in the face of a Bowie, a Barrett, a Mercury. Lou’s face, its planes, didn’t necessarily hold those mysteries, or such exotica, but you brought something out in him…discuss.

MR: We just connected very early on. We became friends. The idea of Lou is what excited me. To me, he was like some mad French Symbolist poet like Rimbaud or Baudelaire. That’s the prism through which I saw him. As David did. Also, Lou was a very willing subject – he wanted me to keep taking pictures of him, maybe because the first shot I took of him was that cover for Transformer. The power of that image…I think that meant something to him. I don’t know though. The one thing I often say is don’t get too intellectual about photography.


TK: Just let it happen. OK, a Bowie question – hopefully this is one you haven’t been asked as I know you’ve had to talk extensively about him since his passing. You were shooting him early on.

MR: I wasn’t a complete novice when I started shooting David. I had shot the Syd Barret stuff, I shot album covers for Roby Gallagher, including the double live album of his. It was like two and a half years into my career before I started shooting David. I wasn’t a grizzled vet or a product of the media industry. I came into it a literature major from Caimbridge, with no cynicism. I was wide open. I saw them like the English Symbolists like Byron and the American Beats.

TK: That was the prism in which you saw guys such as Barrett and Bowie. They were modern day Byrons. But, you shot Bowie for years, the height of glam as Ziggy and Alladin Sane. You knew him. Did you understand that he was getting ready to throw it all away, and simplify his look by coming to Philadelphia for Young Americans and the David Live Tower Theater stuff?

MR: That’s still one of his best albums, Young Americans. He did tell me, yes. The interesting thing about my early days is that often, but not always, I would actually interview these characters. I was educated. I could talk to them. When I met David, I started interviewing him, during that whole Ziggy period. I got to know him a different way than a lot of photographers. He told me how ambitious he was. Now I don’t know how true this was, because he was truly a very empathetic man. But he once told me “You could come in and tell me that my best friend had died, I’d weep a few tears, and go straight back to work.” That’s how focused he was – he wanted to be a star. He had his eyes on the prize, and I was a true believer, even when there were only 400 people in the audience. Something about his energy was hypnotic. He was fun, but he was serious.

TK: You’re not altogether keen on looking back, are you?

MR: Well, not really. I have to, though; I got this “man who shot the 70s” thing foisted on me, and for a while that really nagged at me. I still shoot. What does that mean? After a while I realized that it had a certain ring when it came to exhibitions and books.


TK: You’re as much about the present as you are your past. You captured history. You are as much of the history as you are the artists you shoot.

MR: I was there. I bore witness [laughs]

TK: So what then are you doing with Mr. Diltz – who has a far different look and subject matter than you – and how are you presenting all this on October 8?

MR: Ah dear Henry. A very fine man. A very different photographer from myself. If you want a nice laid back shot, you go to Henry. You want something freaky and edgy, come to Mick Rock. We’re going to go out, and I don’t know what we’re going to do. I’ve got 240 images on my reel. They’ll put up an image, and I’ll talk, darling. I know the images so well, I can do that you know? And it won’t just be the history…you’ll see my Pharrells, Snoop Doggs and Janelle Monaes. This won’t just be the debris of the past.