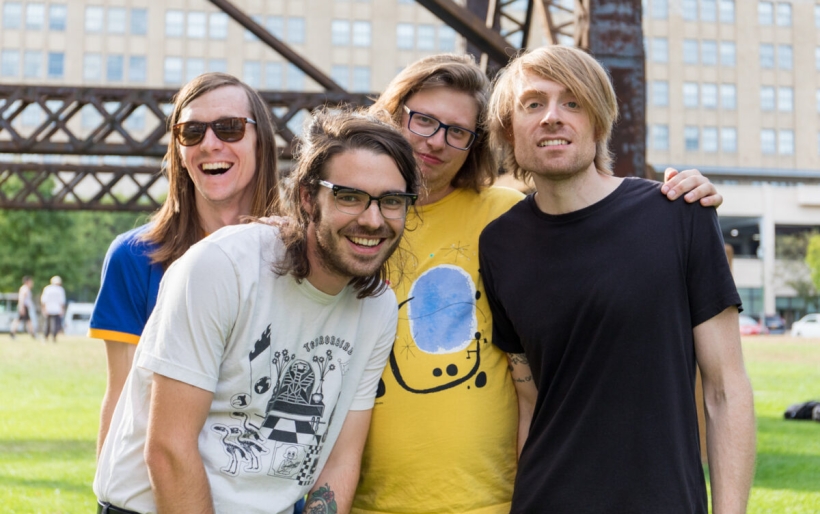 Joining us in the studio for this Indie Rock Hit Parade live session is a Philly band that marks the next step in the celebrated career of its main songwriter.

Led by singer/guitarist Jake Ewald, Slaughter Beach, Dog initially began as a solo project away from his main band, Modern Baseball. With that beloved project recently retired (and a few of its members recruited into this new venture), Slaughter Beach, Dog has become Ewald’s main gig. Earlier this year, the band released their third album, Safe and Also No Fear, and returned to our studio to perform an extended set of new songs.

Each song in this set inhabits a different stylistic space, showing off the versatility not only of Ewald’s songwriting but his bandmates’ skills. Opening number “Tangerine” boats a sing-along chorus, with bassist Ian Farmer and drummer Zack Robbins lending impossibly close harmonies. “Map of the Stars” make a few self-references to Ewald’s life in music, and the bright and bouncy “Heart Attack” is an irresistible confection. Guitarist Nick Harris is a standout player on the last two songs; “Dogs,” with its breezy acoustic arrangement, evokes the Minutemen’s iconic “History Lesson pt. II,” and the ominous “Black Oak” spirals into a full-band workout driven by knotty guitar figures.

Listen to Slaughter Beach, Dog’s Indie Rock Hit Parade session below. Watch videos of the band performing “Heart Attack” and “Tangerine,” and check out some photos from the studio. Slaughter Beach, Dog will be part of the Philly Remembers David Berman tribute at World Cafe Live on January 4th. Learn more here.