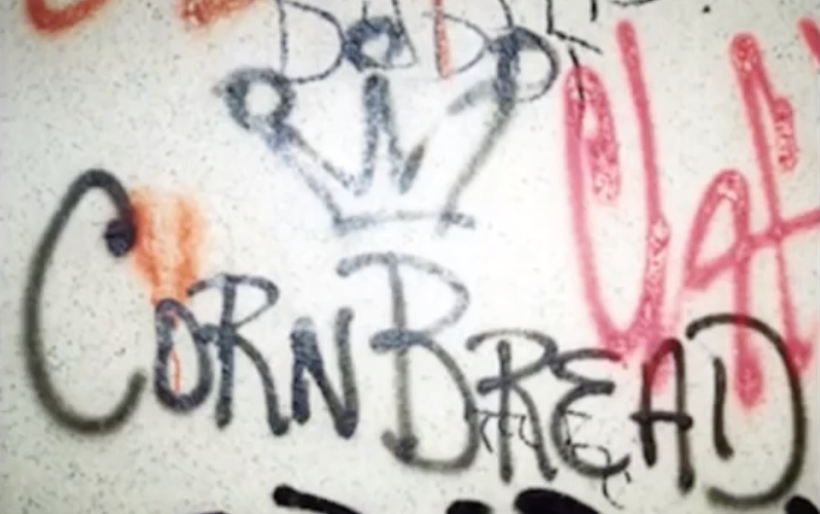 Throughout the 1980s and early 90s, Philly-based artist and filmmaker, Culture Livingston was heavily active in the city’s graffiti scene. Years after his retirement from the craft of writing on walls — which he did under the name DENSKE — Livingston found himself at a Drexel University-hosted screening of Henry Chalfant’s classic film Style Wars. Vexed by the lack of acknowledgment of graffiti’s Philly origins, Livingston challenged Chalfant and the film’s New York-centric narrative during the screening’s Q&A.

“I said ‘it clearly states in the film that you say that graffiti started in New York in 1971 with a kid named Taki (famed Washington Heights graf writer TAKI 183) from Washington Heights.’” Livingston recalls. “When in fact graffiti started in 1967, in North Philly with a kid named Cornbread.” In the years since this happened, there has been widespread acceptance of graffiti’s origins in Philly via origins, but in that moment that wasn’t the case, so Livingston got to work telling the real story.

Livingston’s resulting documentary Tag City: The History Of Philadelphia Handstyles is probably the most thorough historical overview we’ve received on the ins and outs of Philadelphia graf culture, the styles that came from our city and the ways in which those styles influenced modern art movements around the globe.

The film is heavy with interviews from pioneers like Cornbread and chock full of historical nuggets — like the story of how in the 80s, former SEPTA GM David Gunn was hired by the New York transit system to replicate the success he had here combatting subway graffiti, thus effectively bringing an end to subway writing in New York. We spoke with Livingston and got a detailed insight on the film and the history of the art that inspired it.

The Key: For starters, could you tell me a bit about yourself? Where are you from? What you do?

TK: Word. And could you talk a little bit about how you first got involved in graffiti?

CL: My cousin was a graffiti writer. He used to write “CRASH” from MSM, which stood for the Market Street Mob. This was a crew of hustlers from like 60th and Girard. Watching him was how I got into it. They wore the flyest shit and had the flyest girls, so from that, I was sold.

I’ve always been an artist, so that was just something that I naturally gravitated towards. And once graffiti came around, I guess it was a chance to be rebellious, but at the same time be rebellious as someone who was creating art. I was in the 5th Grade and I used to go to Masterman [by trolley] from Southwest Philly, where we lived by 60th & Chester, over to 17th and Spring Garden, so that route took me through the subway tunnels and back then the stations was done with graffiti.

I remember my mind was just blown because it was just all of this art and it just looked larger than life. To me, it didn’t seem like art, it was like somebody was shouting like “I’m here! Look at me!” And the outlaw aspect of doing something at night and having it show up in the daytime was just the illest shit to me.

TK: Cool. And what was your handle? Like what did you write?

CL: The first name that I wrote was “WRECK,” because my cousin was CRASH. And then my name was “WORD” because the W is like a unique letter, but I stopped being WORD because I was going to (George Washington Carver) Engineering & Science and I wasn’t feeling it. I guess I had more of the artist type brain. I was asking my Mom to transfer me out, but she wasn’t having it, so I got kind of rebellious and bombed the second-floor lockers all the way around the building “WORD….WORD…..WORD….”

While I was there, there was a couple of dudes that used to write. At the time, we had just started to get with the Coqui 900 [a form of malt liquor immortalized in Schooly D’s 1987 song of the same name]. One day, I wrote on the board “WORD…drunk every night” and my man Rah said “Damn, that would be a ill crew name” and he wrote “DEN” on the board. And that’s how I got my name DEN. “SKE” [More commonly written as “SKI”] was a suffix that a lot of guys used.

TK: Word! And what years were you active as DENSKE? If you don’t want to say, I understand.

CL: [laughs] Nah, I ain’t got a problem with that. I don’t write on nobody’s shit anymore. DENSKE was 86’ until about 94 / 95’. I was forced into retirement by the State of Pennsylvania.

TK: Could you talk a bit about your film and the process of putting it together? When did the idea to make a film about Philly’s graf history first arise?

CL: The film came about because I went to a screening of Henry Chalfant’s [classic 1983 graffiti documentary] Style Wars at Drexel University in conjunction with the release of his book Subway Art. During the Q&A section, I got up and asked him didn’t he think a retraction was in order. It clearly states in the film that you say that graffiti started in New York in 1971 with a kid named Taki from Washington Heights. When in fact graffiti started in 1967, in North Philly with a kid named Cornbread. The crowd was going crazy, there was a bunch of graffiti dudes in there and they saw me like “Oh shit, it’s DENSKE!” His response to that was “If the story needs to be told, then you need to tell it.”

TK: Yoo, that’s wild. It is interesting to me that so much of graffiti’s history and stylistic innovation happened here in Philadelphia, but we don’t really get that side of the story in media — films, books etc.For folks who might not know, could you talk about early Philly writers like Cornbread, and others and how their art and style influenced New York writers?

CL: They [the style of graffiti] were called “Gangster hands” because that’s what the gang-war boys was doing and that was all over the place before Cornbread. What Top Cat [an influential writer who inspired much of the early New York writers] did was take the style that they used to do, which was a style that originated from around 23rd And Oxford [an area of heavy gang-war activity in the 60s]. Here, we called that “Broad Street-style”, he took that to New York and it became “Broadway-elegant.” This is significant because when guys were competing for space in New York, they started tracing their tags to make them bigger.

Because they traced their tags to make them bigger so that they stood out, that’s how you got to the more elaborate forms of graffiti with the piecing and the stuff that we see today that’s filled with colors and all that. It started with them tracing the tags and one of the first tag styles that they traced was the Broad Street style.

For the people of that time, that style was the most advanced writing style. Especially the stuff that style innovators like PHASE and them did. PHASE 2 was like TOPCAT’s buddy, they used to run around a lot together and this was the guy [PHASE 2] that they credit with starting pieces as we know them [piece is short for “masterpiece.” A piece is a full, elaborate work of graffiti.] The first bubble letters were by a guy named SUPERCOOL223 but the guy that put together piecing as we know it is PHASE 2 and PHASE 2 is based on the Broad Street style that TOPCAT brought to New York, which would be known as Broadway-elegant and that style originates in Philly.