Ellen Siberian Tiger and the transformative season of Halloween - WXPN 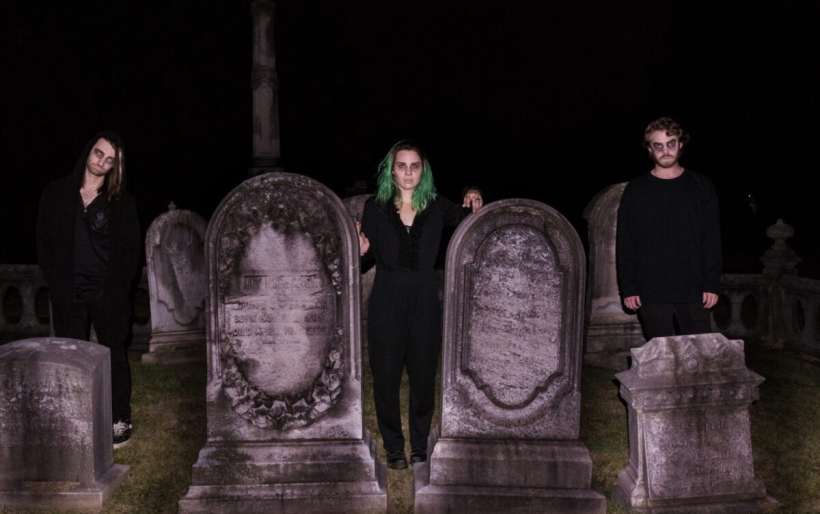 Ellen Siberian Tiger and the transformative season of Halloween

Ellen Tiberio-Shultz has been thinking a lot about how each gig they play could be something special.

“There are so many shows, every night, all the time, thousands of bands,” the frontperson of Philly’s Ellen Siberian Tiger reflects. “And I was like, ‘why should people want to come to mine?’ And I was trying to have an answer for that.”

A new release certainly makes their next hometown show an auspicious occasion — Thursday night at Underground Arts is the first opportunity fans will have to hear “Kitchen Knife,” a taste of the new project Ellen Siberian Tiger has on the horizon for 2020 (more on the song later). But beyond that, Tiberio-Shultz sought out experiential ways this upcoming show, or any show, can be an occasion. They find the biggest impact on a concertgoer comes when the audience can be fully immersed in an event, to the point that their reality is suspended a bit.

“Halloween is a perfect opportunity for creating that,” they say. “Everything is already decorated to look different, you can wear a costume.”

To that end, Underground Arts will essentially be the site of an Ellen Siberian Tiger Halloween Ball this Thursday. Cassidy Strackbein and Joe Moran are decorating the venue and its stage, Tiberio-Shultz designed a signature drink for the night that’s spooky in theme, the art vendors in the lobby lean towards a macabre / darker aesthetic. And fans are encouraged to wear costumes.

Asked about their affinity for holiday, Tiberio-Shultz doesn’t hesitate to be enthusiastic. “Halloween rules. It was my older sister’s favorite holiday. Everything she thinks and does was very cool to me, and remains cool to me. I went trick or treating every year until I fully graduated high school.”

Tiberio-Shultz grew up in the Park Forest neighborhood of State College, which gave them a relatively traditional kid-in-the-suburbs experience: Jack-o-lantern carving, apple orchards, Halloween parades in town. They also recall the fun of scrambling and improvising to come up with a costume each October.

“I’m not the best planner, typically,” they say. “The only reason I’m doing it now is because I have so much more help. But I did a lot of throwing things together, which is always fun. My family would dig out costume boxes, mishmashes of weird items and face paints. I think it was more the process than any specific costumes [that I loved], and all the things that come along with it.”

When they first came to Philly, Tiberio-Shultz found themself on Hazel Street in West Philly, which has its own annual Halloween parade, plus a lot of trick or treaters on the 31st. They relished the opportunity to get into the transformative season: decorating their porch, donning a costume to hand out candy to neighborhood kids, “which is wild being on the other side of it, because I still feel like a child most of the time.”

Beyond the seasonal look and feel of this week’s pre-Halloween show, Tiberio-Shultz put a lot of thought into the lineup of the event. Rather than an indie rock band playing with another indie rock band and one more indie rock band, the bill is intentionally eclectic: the groovy downbeat electronica of Cheeky, the high-energy hip-hop funk of Soul Cannon’s Eze Jackson, with EST’s experimental rock in the headlining slot and DJ Rana Ransom’s curated mix of disco and house keeping the party going till 2 a.m.

“Most people I know don’t listen to just one genre of music,” says Tiberio-Shultz, who excitedly describes the way they envision the energy flowing across the night. They’re equally excited to unveil “Kitchen Knife,” which hits streaming services on Friday the 25th.

The song is sonically spooky in its own way, they say, and is based around intense Drop-D power chords, rather than the virtuosic leads the Berklee-schooled Tiberio-Shultz pressured themself to showcase in their music previously. Lyrically, they describe “Kitchen Knife” as an emotional exploration of a failing relationship through the lens of gender — and the way society’s outlook on gender can shape a person’s actions.

“One of the lines is ‘you hold love like a kitchen knife / it’s not a weapon but it could be,'” says Tiberio-Shultz. “That’s me thinking about masculinity in general, and being in close relationships with men, or people who have been given a lot of male privilege or conditioned as men. Even the most beautiful, wonderful, well-intentioned [people are] conditioned to take and not think about how [they’re] feeling entitled to what [they’re] taking.”

Tiberio-Shultz elaborates: to be in close relationships with men is to accept a potential weapon into your life, this kitchen knife. “When you love somebody, it becomes a battle, even if you don’t want it to be,” they say. “So you have to protect yourself from those things. You don’t want to view a partner as an adversary, but even the traits about the person you love can hurt you or be weaponized against you. You have to trust the person not to do that, and that is difficult.”

“Something I’ve been really interested in is the physical space of the show,” says Tiberio-Shultz. “There are so many preconceived notions of what it’s like to attend a rock show, or what it’s like to view a band. And gender plays into that too. What do we expect from the performers we see? What do we expect when we look at a stage and see all the cues telling you ‘oh, I associate this with all these other experiences.’ And if I can set up a room and a stage and try to erase certain parts we associate with things…like, right now I’m looking at how can I cover gear in a certain way, so it doesn’t look like gear. So your brain doesn’t immediately think ‘AMP. BAND.’ “

Gender, Tiberio-Shultz says, is often forefront in their mind. Much of their music and songwriting is about trying not to be perceived certain ways because of their gender. So even the design of the show — or the thought of a show as a special, singular event — is an extension of that. What can be altered, what can be transformed or changed so they’re taken as themself, no more and no less?

“I’m hoping that if I’m doing the right things, if I’m being intentional enough when I’m writing the songs to try and actually figure out some difficult or complicated things…and if I’m doing a good enough job in performing them, that I can convey that emotion…and [if I can do it] in the thoughtfulness of the space, then I’ll create a space where people can not only hear what I’m intending in the music, but in a room where they have enough space to take that in. And have a really good time. That’s my goal.”

Ellen Siberian Tiger plays Underground Arts with DJ Rana Ransom, Eze Jackson of Soul Cannon, and Cheeky on Thursday, October 24th. Tickets and more information can be found at the XPN Concert Calendar. Below, listen to a Spotify playlist of haunting favorites for Halloween put together by Ellen and the band.