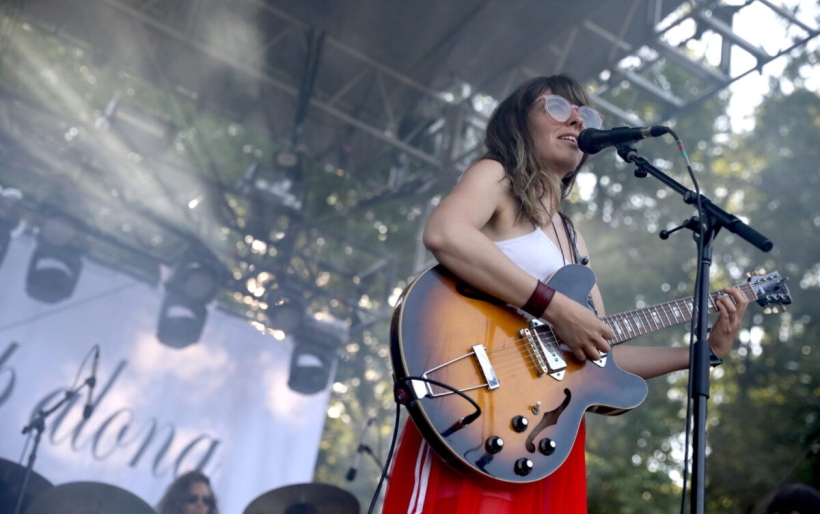 Hop Along | photo by John Vettese for WXPN

Early next year, Hop Along’s Frances Quinlan will release her first project as a solo artist. The album is called Likewise and it comes out January 31st on Saddle Creek Records.

Quinlan hinted earlier this year that she was working at Headroom Studio on a new project, which has fans in Philly wondering: what exactly would a solo FQ record sound like? Hop Along was, essentially, a solo recording and performing outfit for the first third of its existence, with the band beginning to take shape for gigs around 2009’s Wretches EP and beyond.

The answer partially comes in “Rare Thing,” the album’s first single. It boasts radiant electropop textures and wiry beats; the dynamic pace moves from gliding to racing. The words are reflective (which is a mode this songwriter already excels at) and direct (not uncommon, but not the norm for Quinlan either).

Written in the wake of a dream about her niece, “Rare Thing” muses about love in its purest form, and features one of Quinlan’s best lyrics on the refrain: “I know there is love that / doesn’t have to do with / taking something from somebody.” It alludes to troubling people in a troubling world: the toxic personalities and broken souls she’s illustrated over the course of Hop Along’s last several albums. But there’s a sensation of hope, of optimism, of knowing that there’s more to life, and that we can collectively do better; that’s the stuff which brings this song into a territory all its own.

According to a press release, Likewise is a “rumination about the universal struggles of communication and connection between human beings,” and will be nine tracks in total, including a cover of Built to Spill’s “Carry the Zero.” (One of Frances Quinlan’s favorite songs; you might have heard her play it in a solo set or a Hop Along soundcheck.) The album can be pre-ordered Now via Saddle Creek Records.

Listen to “Rare Thing” below, and check out Quinlan’s solo tour dates, the album art, and the track list.