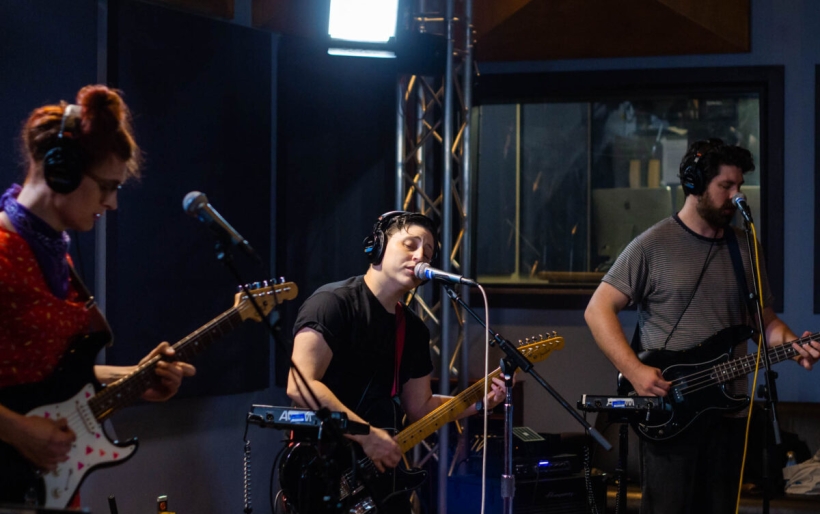 We’re expanding our typical geographical scope for this week’s Key Session, and with good reason: our guest is New York’s Mal Blum, and they’re awesome.

A writer of witty, relatable songs about real life human emotions, Blum is candid, vulnerable, yet very fun both in their live performances and on their studio work — particularly so on this year’s Pity Boy, released in the spring on revered Jersey label Don Giovanni Records. The album solidified the progression from Blum’s early folk-punk releases to the very punk-punk vibe of their current songwriting, propelled by The Blums, a raucous group of backing players with strong Philly ties.

Shredding on lead guitar is Audrey Zee Whitesides — you’ve probably seen her doing the same for Speedy Ortiz on their last album cycle. Barrett Lindgren of Permanent Body has been Blum’s bassist for the past few years and tours, while drummer Ricardo Lagomasino is somebody we first encountered in DRGN King back in the day.

Their swift set draws entirely from Pity Boy and covers a range of topics: protecting yourself from toxic people in your life (“Not My Job”), experiencing personal trauma and working to overcome it (“Salt Flats”), and loving yourself as you are, complications and contradictions and uncertainties and all (“I Don’t Want To”).

Listen, watch, and rock the hell out below. And don’t sleep on getting tickets to Mal Blum’s next Philly concert; they’ll be opening for Lucy Dacus at Johnny Brenda’s on New Year’s Eve. More information can be found at the XPN Concert Calendar.