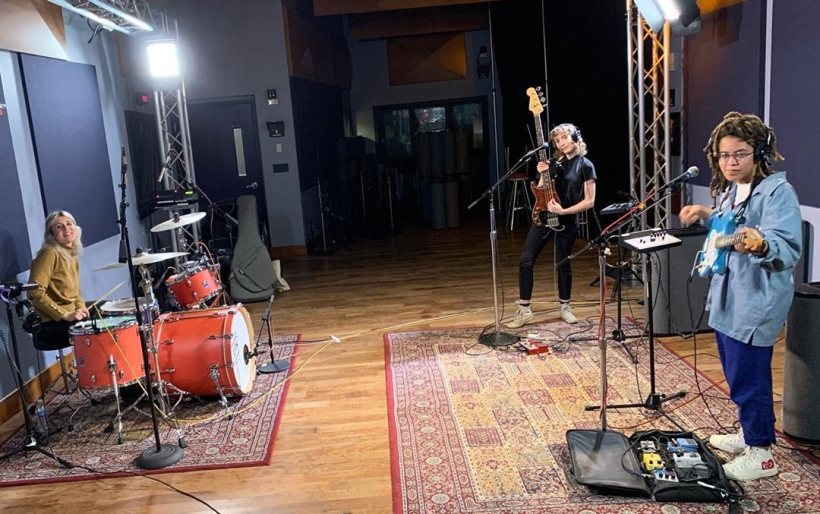 The pinned post that sits atop Corey Flood‘s Twitter profile is a perfect encapsulation of the band’s brooding moods as well as its warm humor: “we don’t make bedroom pop we make basement goth.”

Indeed, the Philly trio’s songs are perfect for striking uneasiness in the air this season: ruminative beats by drummer Juliette Rando march along amid minor key atmospheres, guiding whispered vocals by bassist Ivy Gray-Klein and bolder, expressive singing from guitarist Em Boltz. But as Corey Flood noted in an interview with Olivia Horn on The Key last year, the whole “goth” thing is kind of un-serious; it’s not like they’re decked out all in black (Gray-Klein notwithstanding) and surrounded by signifiers of the macabre. Instead, the band writes introspective music about complex emotions and has fun with preconceptions and pigeonholing along the way.

Corey Flood got off to an unexpected start in 2018 when a set of unfussy demos (basement-recorded, yes) were picked up by Fire Talk records and released as their debut EP, Wish You Hadn’t. The band played a healthy assortment of DIY shows around the city over the ensuing year, gradually broadening the scope of both their songwriting and their gigs. This week, Corey Flood arrived home in Philly after a run of dates opening for The Districts, and they recorded a Key Studio Session at WXPN where a four-song set was packed with three unreleased cuts.

After opening on Wish You Hadn’t‘s haunting single “Crypt,” the band leads into new selections that reveal an undeniable early-80s Cure vibe to their recent work. A rollicking bassline and squealing, searing guitar leads intersect on “Down The Hill,” while the poppier “Honey” is a bounding reflection on apathy and frustration. While I’m certain that Corey Flood has a Disintegration in them, they are solidly in their Seventeen Seconds phase, and I am totally here for it. Other reference points might include The Raincoats and Young Marble Giants, and the set closes with the plain-spoken “Heaven Or,” where Gray-Klein is is composed and confident in the face of adversity, repeating “I know what I saw” on the refrain.

Watch the band play that song live in WXPN studios, and listen to an archive of its full Key Studio Session below. These songs and more will be on Corey Flood’s debut LP, due out early next year on Fire Talk, and in between now and then, they’ll play Union Transfer opening for (Sandy) Alex G on November 30th. Tickets and more information can be found at the XPN Concert Calendar.