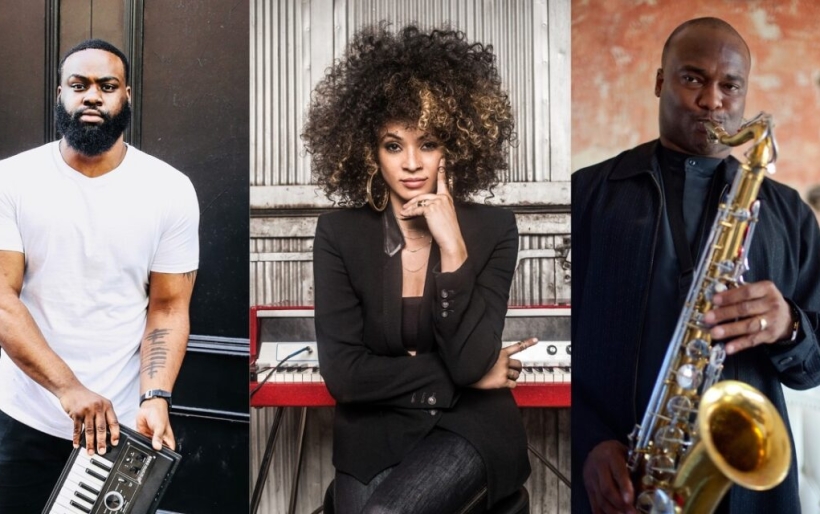 While it’s gone through its share of rough patches, Blue Note Records has been a leading jazz imprint for eight decades now, a legacy celebrated in the acclaimed new documentary Beyond the Notes. The label, now steered by Don Was, is throwing itself a party through its all-star 80th Anniversary Tour, with its closest stop to Philly at The Grand Opera House in Wilmington on Friday, November 8. The triple-bill foregoes the legends to feature three current Blue Note artists: vocalist Kandace Springs, keyboardist James Francies, and the James Carter Organ Trio, led by the blustery baritone saxophonist from Detroit. [INFO]

Saxophonist Joshua Redman has been particularly prolific of late. His set this summer with Still Dreaming – the fantastic quartet with Ron Miles, Scott Colley and Brian Blade paying homage to his father Dewey Redman’s Ornette-inspired Old and New Dreams band – was a highlight of the Detroit Jazz Festival (where The Bad Plus’ Dave King stepped in for Blade). He also provided adventurous solos in collaboration with the innovative chamber ensemble Brooklyn Rider on composer Patrick Zimmerli’s Sun on Sand along with releasing a new album of his own. That release, Come What May, was the first recording in almost 20 years by his long-standing quartet, one of the most attuned small groups in modern jazz: Redman, pianist Aaron Goldberg, bassist Reuben Rogers and drummer Gregory Hutchinson. That group will play as part of Montgomery County Community College’s Lively Arts series next Friday. [INFO]

Two weeks later, on Nov. 23, MontCo will host vibraphonist Stefon Harris and his boundary-stretching group Blackout, which draws on inspiration from hip-hop, R&B and gospel. That band’s acclaimed album Sonic Creed, which confronted many of the social issues that have continued to dominate headlines in recent years, also marked a comeback following a too-long hiatus, following nearly a decade of silence while Harris focused on his innovative approach to jazz education. [INFO]

I’ve already listed two competing shows for Nov. 8, so luckily that night’s Kenny Garrett Quintet concert at South is the first of three evenings for the legendary altoist, who came of age playing with Miles Davis and Duke Ellington. It’s another strong month for the Broad Street club, which also hosts bassist Richie Goods paying tribute to his mentor, pianist Mulgrew Miller, on Nov. 14, and two nights with Chilean vocalist Claudia Acuña on Nov. 22 and 23. [INFO]

The Clef Club kicked off its latest “Jazz Cultural Voices” concert series last month with a rare appearance by trumpeter Charles Tolliver, who led a highly-charged all-star band through a tightrope-walking set of standards and his own thorny compositions. This month’s edition will be more of a homecoming, as Jaleel Shaw returns home to Philly – and to the Clef Club, whose director Lovett Hines was a mentor during the saxophonist’s formative years. He’ll lead a fantastic quartet on Nov. 9, with pianist Taber Gable, bassist Ugonna Ukegwo and drummer Kendrick Scott. [INFO]

In addition to being a prolific classical violinist, June Bender has been a regular presence on the Philly jazz and improvised music scene for years, working with the likes of Matt Davis’ Aerial Photograph and guitarist Nick Millevoi. She combines those worlds in Unseen Rain, a mesmerizing chamber group that features cellist Alban Bailly, vibraphonist Ashley Tini, bassist Matt Stein and percussionist Mike Szekely. The group will celebrate the release of its debut album, Out Beyond, at The Maas Building on Nov. 14, sharing a bill with other string-centric improvisers: violist Veronica MJ with bassist Matt Engle, and cellist Kinan Abou-afach with bandoneon player Shinjoo Cho. [INFO]

The young pianist ArcoIris Sandoval released the debut album by her Sonic Asylum Trio last year. Aptly titled First Voyage, the session treks through influences from jazz masters like Wayne Shorter and John Coltrane to anime and science fiction, with a steely sense of swing that seems to be forever gazing beyond the next horizon. Another example of that vision is the D.O.M.E. Experience, a 20-piece jazz orchestra and multimedia project that advocates for environmental and social justice. Her co-leader on that ambitious project, Mimi Jones, will be on bass on Nov. 16 when Sandoval steps into the listening lounge at @exuberance, along with regular Sonic Asylum drummer Allan Mednard. [INFO]

The great improvising and experimental drummer William Hooker will hook up with his fellow sonic adventurer and outsider poet, saxophonist Elliott Levin, in Levin’s hometown on Nov. 23, at a Fire Musuem-presented show at The Rotunda. The two will join forces in a trio with D.C. bassist Luke Stewart. The bill will also feature local trance-jazz outfit Sirius Juju. [INFO]

Finally, Thanksgiving weekend brings home Philly-born organ great Joey DeFrancesco, who’ll lead his trio at Chris’ Jazz Café on Nov. 29 and 30. The early show on Friday is already sold out, which should leave plenty of time to shake off the food coma and make one of the remaining three sets. DeFrancesco has been taking his Hammond into the farther reaches of jazz recently, with excursions into the political and the spiritual, but the holiday and the familiar surroundings will most likely find him digging back down into his soulful roots. [INFO]