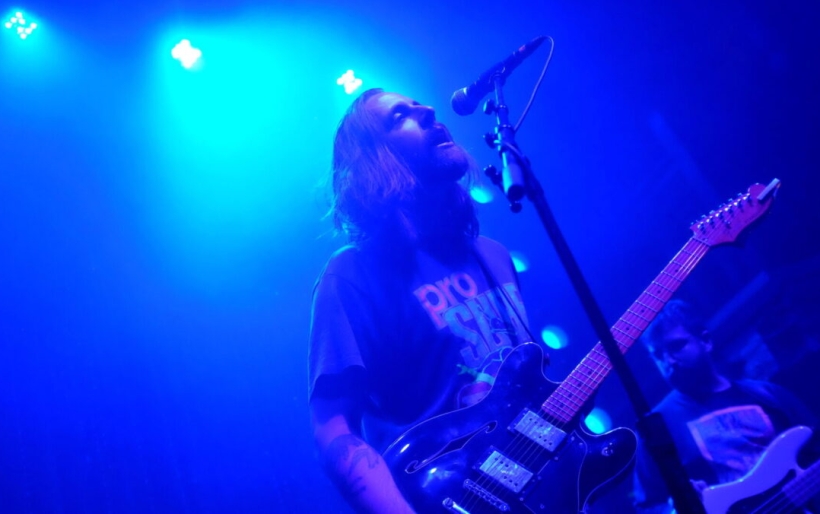 Last night, Caracara‘s fall tour ended at home at Johnny Brenda’s, and they were joined by Curtis Cooper and Bad Heaven LTD. Their reprieve from traveling won’t last long though, because the Drexel natives will hit the road again in early December for a mixed-bill tour with slam poet Neil Hilborn.

The leg of Caracara’s fall tour saw them through some substantial career stepping stones, including a session with Audiotree during their first week out. It was received incredibly well, though singer and lead guitarist Will Lindsay said that he actually hasn’t watched it yet; he needs to give it a couple months before he can see himself on screen.

Caracara is still riding the success from the release of their spring EP Better, recorded with Conshohocken-based producer Will Yip and released under his label, Memory Music. They plan on recording their second LP with Yip as well, who took them on in 2018 after making connections through Baltimore group Pianos Become The Teeth.

Though Caracara has such an energized and ethereal presence onstage, their individual personas are hilariously relatable. Chatting before the show, they told me that they pass long drives in the tour van by watching Tiktok videos and are in the process of making a secret Twitter account. If you were at Johnny Brenda’s, then you heard them plug it onstage, but I’ve been barred from revealing the handle here so the project “gains clout naturally.” They’re funny, down to earth people just like their fans, with very normal personal lives. Lindsay splits his time between Philly and California, and keyboardist Carlos Pacheco-Perez works at Temple University’s music department.

Caracara opened their set with their latest single, enigmatic, synthetic rock track “Dark Bells,” which was released in mid-September. Lindsay’s rugged vocals, paired with heavy echoing guitars and urgent keys make for one of the most cathartic post rock soundscapes from any band I’ve heard, a maturation of their sound since first breaking onto the scene two years. This might not yet be Caracara in its full form, but it is very, very close.

There were nearly no breaks in the set, each song seamlessly fading into the next. “Learn Your Love” and “New Chemical Hades” off of Better were featured in the lineup. Caracara knows how to channel all their energy into each moment of a song, and the ultimate breakdown track was “Evil” off 2017’s Summer Megalith LP. It’s a heavy, mournful song, a purposeful valley in the setlist where the closer “Better” was the obvious peak. That song is such a groundbreaking part of their discography. There are two very distinct moments in this song, and it arguably launched them into more mainstream listening. The two and a half minutes are an understated, energy-building couple of verses with lyrics that just slowly tumble one after the next. When the breakdown hits – the pace changes, the mood shifts, and the next chapter of Caracara’s sound is teased. It was a breathless end to their whirlwind tour.

Caracara will kick off their winter tour on December 4th in Washington D.C., and while there won’t be a Philly date this time around, it takes them down south and west to Texas; dates can be found here.