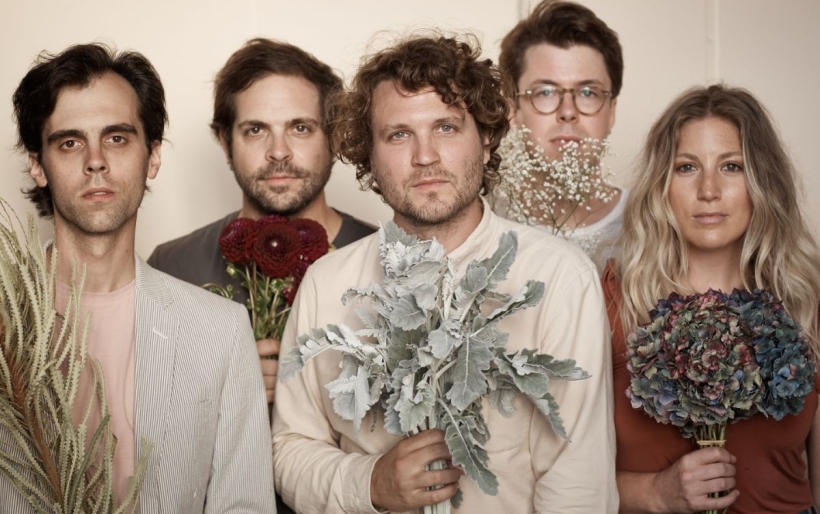 This past August, Ra Ra Riot released their fifth studio album Superbloom – a moniker for the rare phenomenon in which numerous wildflowers bloom in the desert. Like the influencers, tourists, and unbridled children who obliterated the recent poppy bloom in Southern California, Superbloom’s tracks hail from diverse origins. The album sounds like an amalgamation of the band’s previous records, featuring bittersweet strings, neon synth, and crowd-pleasing choruses. And, as Ra Ra Riot’s lead singer Wes Miles shared with me in our interview below, musicians that served as the pretext for his artistic identity.

Ra Ra Riot contracted several producers and writers to assist with Superbloom, including longtime creative collaborator, Rostam Batmanglij, who has also recently worked with artists like Clairo, Haim, and Maggie Rogers. Superbloom is said to represent the East Coast-native band’s vision of California, so since Wes has a B.S. in physics, I suspect Newton’s third law will beget a forthcoming Ra Ra Riot album that envisions not pumping your own gas and bagels.

We caught up with Miles over phone last week to talk about the new album and more.

The Key: Happy Halloween! Are you doing anything spooky today?

Wes Miles: We’re just passing through Eugene, Oregon. It’s an off day, so we won’t be doing a show and I don’t know if there’s much spooky stuff happening in here right now, but we will seek it out later.

TK: Gotcha. Let’s get into your new album, Superbloom. In previous interviews, you’ve said that Superbloom represents the construction of a new Ra Ra Riot. What characterizes this current incarnation of the band?

WM: I think what I meant by that was that we’ve made a lot of big changes in our history. In Superbloom, were able to build off of albums like Beta Love and Need Your Light—just take everything that we did a step further as opposed to like changing our foundation. We extracted inspiration from a lot of different places in this sort of piecemeal approach. We don’t have a specific sound. We kind of went away from the whole “oh there’s strings on every song” or “oh every song is upbeat and punky and loud.” We fall all over the spectrum and have just broadened the definition of Ra Ra Riot, in a way.

TK: Yeah, I hear that on the album, it seems more like an evolution based on the music you’ve probably previously written, picking what you love from that and then compiling it into one project.

WM: Yeah. We’ve kind of steered it away from the easiest or more sensible pop. We’ve tried to make this album more inaccessible at times, and it has worked well for us. Obviously, we’ve had some success with songs that are poppy. But for this album it was fun to really give into something that was a little more salient, you know, and something more immediate feeling. And I think that works because we still have the counterpoints of the kind of raw punky songs, like “Endless Pain/Endless Joy” and “A Check For Daniel.”

TK: I wanted to ask you about the range of Ra Ra Riot’s sound. The band’s discography varies from synth pop to pop punk to acoustic singer-songwriter. So I’m curious, what were your musical inspirations growing up and how have they influenced the music you’ve made in Ra Ra Riot?

WM: My family is very musical. We always had music, either playing or being played by someone in the family. Both of my parents are singers—not professionally, but they both have really good voices. And my mother is a pianist and my father is a guitar player and pianist and wrote songs when he was younger too. My older brother is also a really great bass player and guitar player. When I was younger, it was a lot of stuff that I inherited from my parents or my older brother. Like the pop music of the 80’s, Paul Simon and Michael Jackson. My family is into like Steely Dan, and Stevie Wonder.

I inherited a lot from my brother as well, like U2, Zeppelin, and then The Police. In high school I started to get more into indie stuff like…Caveman. And then of course Kate Bush. Something I learned from her is that theatrics can still be part of something that’s deep or serious in a way. It’s the combination of the dancing and the beautiful singing and kind of funny subjects at times. You can still like have a rockin’ song with all those elements.

TK: I want to come back to the practice of incorporating humor into your music. But before that, I did a little research and I found that you majored in physics at Syracuse. Has your knowledge of physics ever intersected with your passion for music? And if so, how?

WM: Yes, very much so. I think early on it’s really hard to tell. But after our first two records I was like “enough, I need to dive headfirst into this.” So, I love physics—I think that was part of what made Beta Love what it was. I love sci-fi and I love, like, actual science. Diving into futurism and techie dystopian ideas on that record, that’s the same part of my mind that gets excited about physics. All of it is really important to who I am.

TK: I don’t think a lot of people come to music with a background in physics or chemistry, so to see them combined in a way where the essence of science and science fiction is represented in your sound is really cool. Back to what we touched on before, you admire artists like Kate Bush, whose songs make sense of darkness through theatrics. I see this in the song about unholy rent prices, “A Check For Daniel.” There’s this punishing kick drum, frantic guitar riffs and a robotic, “I must get, I can’t forget” lyric, which produces more of a zany commentary than a moody critique on predatory landlords. What other absurd, everyday things do you find humor in?

WM: Just about everything really. I think that if you can’t laugh at a lot of the things happening in the world, you’re in trouble.  There are certainly things that need to be taken seriously. But I don’t think that precludes humor. I think sometimes, people believe that whatever they’re witnessing in this moment is the worst thing that’s ever happened. I don’t want to get political, but there’s a lot of injustice in the world right now. But there always has been.

Ra Ra Riot plays the TLA on Thursday, November 14th. Tickets and more information on the show can be found at the XPN Concert Calendar.