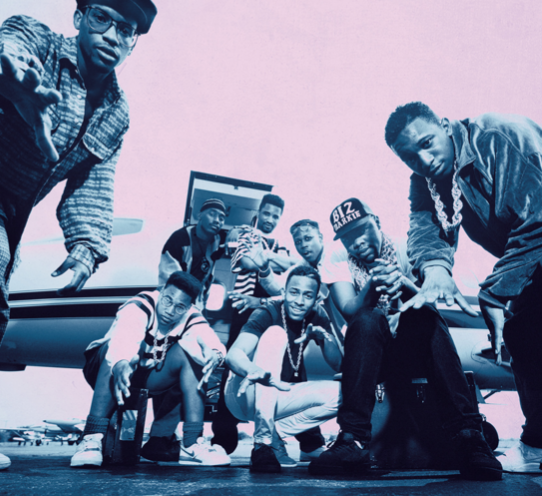 Most hip-hop fans of a certain age can recite the opening lines to The Notorious B.I.G.’s classic “Juicy” at the drop of a hat: “It was all a dream, I used to read Word Up! magazine / Salt-n-Pepa and Heavy D up in the limousine / Hangin’ pictures on my wall. / Every Saturday, Rap Attack, Mr. Magic, Marley Marl.”

Not as often discussed is the meaning behind those lyrics: those are very real people, real publications, real cultural institutions that shaped the young Christopher Wallace when he was just an aspiring young MC from Brooklyn, and by extension, shaped hip-hop at large. Biggie is essentially giving you a history lesson in four bars, all the way down to the song title “Juicy” nodding to The Juice Crew and its various affiliates that pioneered rap music in New York from the late 70s through the early 90s.

This year, Bay Area journalist Ben Merlis presents an oral history of this period in time, via BMG Books’ music-centered RPM Series. Released this past Tuesday, Goin’ Off: The Story of The Juice Crew and Cold Chillin’ Records chronicles the radio DJs (Mr. Magic), label impresarios (Marley Marl), and artists (everybody from MC Shan to Big Daddy Kane and Roxanne Shante, Kool G Rap, Biz Markie, and countless others) that came together between hip-hop battle contests and neighborhood beefs, 12″ singles and album-length statements, diss tracks and responses, all in a largely independent industry charting its own way through the pitfalls and pinnacles of artistic aspirations and commercial demands.

Through scores of interviews, Merlis tells the story of the scene in the participants’ own voices. The accounting of the series of “Roxanne” songs — 20-something tracks deep by at least a dozen different artists — is a fascinating look at the moment where folklore and pop music overlap. Reading about the unexpected success of Big Markie’s “Just A Friend” feels as triumphant as the label’s eventual downslide is heartbreaking. And hearing artists from the post-Juice Crew era (like Black Thought of Philly heroes The Roots) talk about the label’s importance to their own career elevates a sometimes-forgotten corner of rap history.

To further shine a light on Goin’ Off, Merlis will appear at Radio Kismet on Wednesday, November 13th for a book talk with Philly journalist John Morrison — host of the Serious Rap Shit podcast as well as WXPN’s Culture Cypher Radio, and a writer here at The Key. Morrison says that the talk will specifically include a look at Philly’s own Pop Art Records — which released music by Shante, MC Shan, and Steady B — and its connection to Cold Chillin’ Records. In the 80s, the two labels worked in tandem, building a bridge (pun kind of intended) between two insular but thriving hip-hop scenes when the industry establishment wasn’t yet willing to do so.

The event is free and open to the public, and begins at 7:30 p.m. — more information can be found at Radio Kismet’s website. Revisit some classics from the Juice Crew / Cold Chillin catalog below.