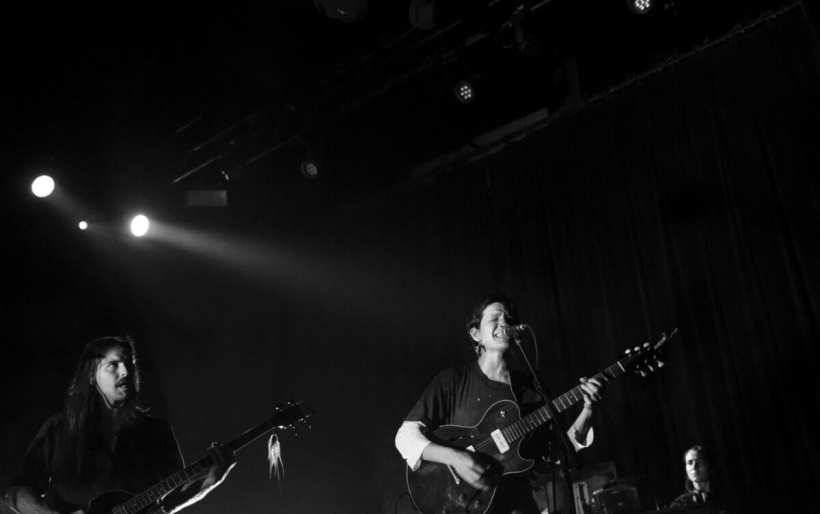 I’m having trouble believing Big Thief are a real band lately. Watching videos of their performances around the world, on stage and in studios, it’s difficult to really fit them into a space in my world. Rather, they make a spot of their own, one where they are captured playing acoustic in a camper on the edge of a corn field, using random objects for percussion, or sticking things on their faces on national television. Even their release of two albums within one year, UFOF and Two Hands, is something of a modern day music industry marvel. They seem to be the sort of band who can make music anywhere and anyhow, the kind I imagined existed when I was a teenager, but have never seen until now.

This is all to say, I was eager to see their performance at Union Transfer this past Saturday, to ground them in some perspective. In that regard, however, I failed. Instead, I was even more enamoured by their strange mythology, somehow undeterred by technical difficulties on-stage and instead making the most of the tools they’ve been given.

Palehound opened the night, the Boston band bursting with sound. Frontwoman Ellen Kempner’s somewhat understated vocals gave a sense of restraint to contrast the blown-out instrumentation, but strip back the surface of this wall of sound and you can hear the intricacy behind it, synthesizer notes complementing every lyric, and Kempner providing intricate rhythms on guitar with glistening distortions. Bassist Larz Brogan, meanwhile, added depth to each song with incredibly mobile basslines, reflected in their discreet tip-toe-ing around the corner of the stage. However, Kempner stole the scene with “Killer,” a moody, almost Old-Western style song reeking of revenge with a guitar lick that cuts.

Big Thief walked on to a backlit stage, each member surrounded by a halo of violet light. They began with the live version of “Mary’ from 2017’s Capacity, significantly up-tempo and jauntier from the recorded version. Camera operators on the stage were somewhat distracting at first (a notice at the box office had foretold of this), but they quickly became a part of the scenery. From there, they launched into “Real Love,” frontwoman Adrianne Lenker’s guitar skills at the forefront during her extended solo, with massive applause throughout from the audience, into “Shoulders,” finally reaching the latest album released, Two Hands, although this had been a live favorite for years at this point.

Before “Shoulders,” however, there was a strange rumbling in Lenker’s guitar; she fiddled with some knobs and played on, but when they reached the break, crew members descended. Lenker took a seat and the rest of the band followed save guitarist Buck Meek, who played a recent solo release of his, “Halo Light.” The special interlude showcased his vocals, usually in harmony with Lenker, but now able to display the tenderness in his words, and his guitar was given ample room to stretch sounds like flexing muscles. The band reconvened for two more songs before another sound issue, likely caused by the lack of a drum riser, requiring more attention to Lenker’s amp. Meek played another of his, the unreleased “Pareidolia,” which was somewhat less remarkable but nevertheless a welcome breath from the all-encompassing howl of Big Thief, Meek bringing some dusty, quaint folk into the night.

As soon as the technical difficulties had been resolved, the night otherwise went smoothly, Big Thief in tune with each other and the audience, few words shared between song but the songs themselves filled with intense focus and direction. Meek would back off for a verse, but as soon as Lenker stood back he launched like a rollicking train, such as on “Not,” the lead single from Two Hands, when he takes the lead in what feels like a stadium-sized sequence of swelling and grinding chords. Even in “Paul,” when given only a few notes to work with as opposed to several minutes on “Not,” he manages to entrance, his guitar-playing feeling like a language on its own.

Lenker got some solo time on stage as well, playing an unreleased single, “Spud Infinity,” that uses the same kind of tumbling, stream-of-thought lyricism as on “Mary,” but brings some of the folksy, old-fashioned charm found on “Cattails.” Their performance of “Forgotten Eyes” lost some of the complexity I appreciated on the album in a live setting, but flowed nicely into “Masterpiece,” their hit single from their debut album of the same name. As the end of the night approached, “Contact” managed to keep the energy rolling, Lenker opting for a sort-of speak singing before what could best be described as a “drop” midway through, Meek playing hazardous, crashing riffs while Lenker screams from the back of her throat, a jarring penultimate song before concluding with “Cattails,” a much more subdued folk ballad.

Although the sound issues put a bit of a damper on the night, you could hardly tell from looking at the band. Last year, when Big Thief played First Unitarian after the release of Capacity, they also ran into problems when they shorted out an amp, and two years ago at Johnny Brenda’s Lenker’s guitar went out mid-song. Maybe something about Philadelphia and Big Thief don’t mix, but each time inspired impromptu adjustments. Maybe there’s something to be said about the spontaneity of live performance, or the resilience of a band who three times now has been spurned by the City of Brotherly Love, but all I’ll add is that throughout good and bad days, let’s feel lucky Big Thief plays on.