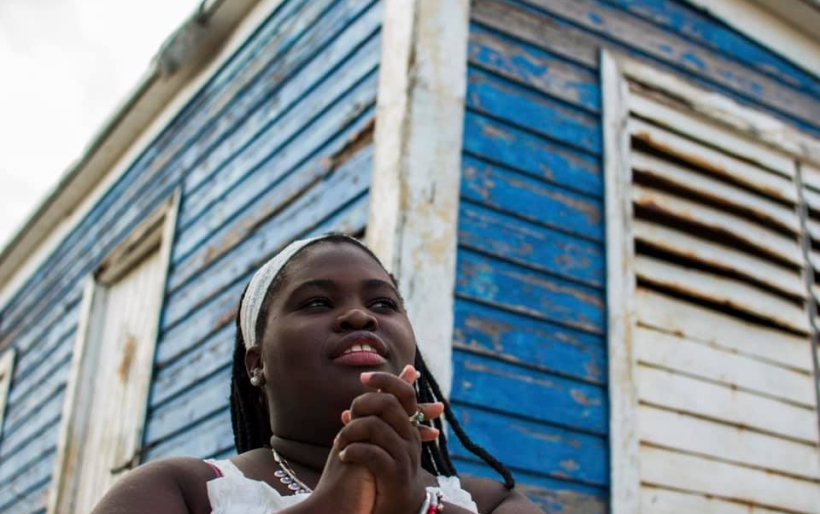 Dayme Arocena | photo by Pablo Dewin | courtesy of the artist

Daymé Arocena is the soul of Afro-Cuban music, its ancient traditions, its flittering futurism, and mostly, its holiest of religions, Santeria. The latter is a guidepost to everything that she is; from how she prays and dresses to how she carries a tune. Her mountainous voice and its stirring momentum has been compared to the dramatic sound of La Lupe and Celia Cruz, as well as Aretha Franklin.

But for my money, and with no exaggeration, the might, nuance and manner in which her voice seems to bubble up like hot lava until its bursting point, make Arocena her own woman with little reference point. And though her jazzy first album, Havana Cultura Sessions, was actually recorded in London, every album since – Cubafonia and her just-released new record, Sonocardiogram – has been homegrown and homespun, moving closer to Cuban roots and sinew, to the point where the atmosphere and the artist herself have become one. That the new album is less pop, hip hop or jazz-influenced than her previous work is no surprise. Moving closer to the soul of Santeria, with a hint of her classically trained origins and her recently developed love story, was the point of Sonocardiogram from its start.

AfroTaino Productions is bringing Daymé Arocena into World Café Live on November 13 for a rare live showcase with the Cuban dynamo. We caught up with her in Canada this weekend during the start of her North American tour, where she bared her soul and spoke her mind.

The Key:  You started off in choir direction and big band singing with Los Primos. I can hear both of those things in a song “Cubafonia.” I know too that you had classical music training before that. How do you see your origin story in music as continuously influencing where you are now? Perhaps with the new album?

Daymé Arocena: This new album, for me, is a symbol. A symbol of my life. It’s a journey back-and-forth to myself. I cannot talk about who I am without telling the full story, not ignoring the sides of my life as a choir conductor and my classical background. All of it influences me every single day. Even if you don’t listen to (the things of my past), it is still there. I wanted with this album to talk about my life experience and I wanted to start from the beginning. You get more full flavor of who I have been always – starting off singing jazz with a big band, being classically trained, all that. And you can feel that in this album. I wanted to experiment a little bit, and work with music that I wrote when I was 17 years ago.

DA:  It was a different emotion. I wanted to capture that point of my life.

TK:  Going back to the classical elements of your past… that comes through most, for me, in the manner in which you break Sonocardiogram into three movements — suites, really — named after Santería orisha deities. Have you been looking to do this since you started recording? It sounds so passionate here.

DA:  Let me tell you that every single day of my life I want to be more of an artist, and less of a product. At the beginning of my solo career, I was pretty happy, I must say, about getting a record deal. I wanted to be successful. I realized, however, at this point of my life, that success — having a house, a car, money in your bank account — means less than being honest to yourself all the time. Showing to the world that you have something to deliver. Something that is going to stay. Something that people will listen to, ages and ages after you pass. That’s why I came to classical music, and composers of the 15th and 16th centuries. The music industry of today made music into a product. I learned in this journey that is life that you can die just to be honest with yourself. You cannot make money at all.

TK: That is the risk you take when you are an artist.

DA:  Being an artist is my whole life, I don’t have memories of being anything but. I don’t know a life without music, without singing, without writing. So, I think my mission in life is to deliver music, honestly. If that is going to give me money, great. I don’t make profit? I’ll sell peanuts. I will do something else to pay my bills. An album shouldn’t be just 10, 12 songs you put together. It should be a concept. Why put together random songs? Just so you can make a tour? I want to make a piece of art.  I love conceptual art. Classical music, of course, gives you that background – how to put things together, from a sonata to a suite. You learn how to combine different rhythms. That was a nice inspiration.

TK: Would you say that, because Sonocardiogram is so radically different from your other albums, was there a different process into it?

DA:  I decided to go out of the recording studio because they are so dark. They are a bubble where you have no outside contact, no idea that something is happening. Rain. War. Music is part of ambience, has to be part of the atmosphere. I wanted to make an album that sound alive, sounded live, maybe something like you see and hear in concert. Because when you see me in concert, you are seeing Daymé. Daymé is a person that breathes, feels, that gets the energy of the space and interacts. I wanted to have that energy on the album, so we went to a space to record where everybody outside could hear us, and that we could hear everybody. It was pretty fun. You could hear cats and dogs fighting while we were recording. Most people who hear it, thinks it sounds weird. Music can be raw. It’s not meant to be perfect.

TK: Can you pinpoint the moment where you were ready to make this type of record?

TK: Congratulations. So, I love the name of the new album. Why call it Sonocardiogram?

DA  First, thank you. I didn’t know what to call this album. I had no ideas, and it was making me crazy. I started thinking that an album with this sort of honesty should have a name that, you know, was a symbol of that. I am a person who dreams a lot, and remembers them. Sometimes, the things I dream eventually happen. Sometimes my dreams are musical. I can see things in my dreams. I woke up one night from a dream, saying out loud, “echocardiogram, echocardiogram.” My husband was beside me, asleep, and was confused. Why would I say something so medical?

I called my mom, who is a nurse, and asked her what that meant. That is a scan that pregnant women use to see and feel the heartbeat of their babies. She gave me a really beautiful explanation. My own heart, on this album, showed everything that was inside, all of the feelings that are living there. But, I thought too, to make it more interesting, of something related to the music in my heart. I was looking for something about sound, so I made my own combination. That’s just it. Weird story, right?

TK: No, I think it’s charming. Now, Santeria is part of everything you are: how you dress, how you think, how you pray, and most of all, how and why you make music. On this album, it seems as if you’re touching on your spirituality and Santeria’s influence to an even greater degree.  How did that become a part of your life to begin with, and how did it evolve to the point of expression that is Sonocardiogram?

DA: “Trilogía,” from this album, was something I wrote when I was 17, when I first discovered the music of Santeria before I was a practitioner. It’s valid to say that I became a practitioner five years later. It took me awhile, to get the faith. The faith came through music. Santeria’s music has given me so much, as an artist, as a creative person. Any Cuban gets curious about Santeria’s music and scripture. We get curious because it is so rich.

My initial point for Sonocardiogram… I could not find my music without Santeria’s influence. For example, “Nangareo” – a poem – is inspired by a ceremony where we ask for blessings. I do this early, before midday, before the soul takes that position on the earth. I decided to start my album with a poem inspired by this. They tell you your life story. A priest can talk to you about your ancestors, somebody who just passed away, something that will happen in your life. So, even from the beginning of the album, its concept, I wanted to ask for the permission of the orishas (deities) the echoes of my spirit, to tell my life story to the people. I wanted to connect every single song to the heartbeat of Santeria song.

My first album had one song dedicated as such. My second album had a little bit more, where you got to see more influence and experience. Now, Sonocardiogram is everything of Santeria’s musical life. I don’t know what  the next step is, but, this new album is, how you say, like a washing machine. I washed my soul there, in the river. It is like washing my soul in the river.