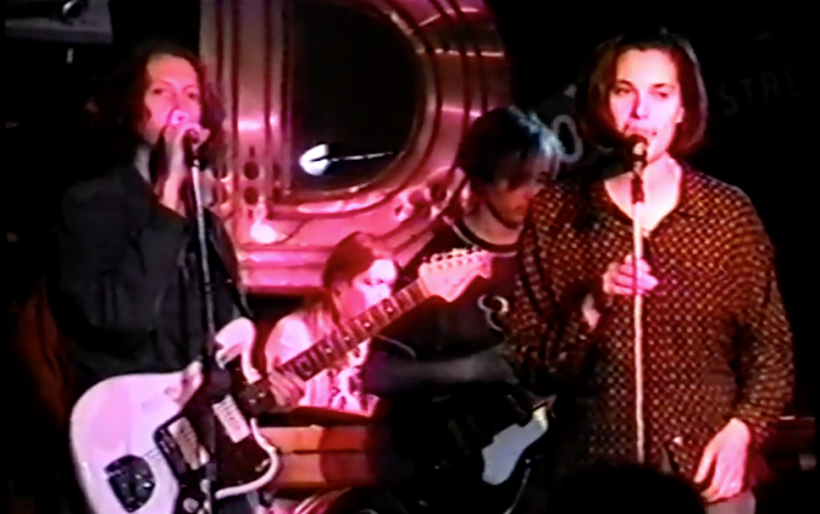 Watch Stereolab make their Philadelphia debut at Dobbs in ’93

When their reunion concert came to Union Transfer earlier this year, our Rob Huff declared that Stereolab “still got it.” What is “it,” exactly? Consult this vintage footage from 1993 to find out: it shows the band on November 11th, 1993, headlining playing the matchbook-size stage of South Street haunt J.C. Dobbs on the tour behind their second LP Transient Random-Noise Bursts with Announcements, opening for Unrest.

The concert was the band’s first full U.S. tour, and their Philadelphia debut; per Setlist.fm, prior to this run, the overwhelming majority of the band’s performances were in London, Paris, or Belgium. Impressively, the material that Stereolab played at this early date still holds up (and honestly still sounds ahead of its time) today. In the nine-song setlist, “French Disko,” “Jenny Ondioline” and “Lo Boob Oscillator” were all performed at that Union Transfer concert.

The footage is remarkably clear both visually and sonically, and hearing keyboarist Lætitia Sadier trade vocals with the late guitarist Mary Hansen on the opening “French Disko” is a treat. Sadier grooves a bit to the pulsing beat, at least as much as spatial constraints let her; in addition to Hansen, she’s sharing the stage with guitarist and Stereolab co-founder Tim Gane, plus drummer Andy Ramsay, bassist Duncan Brown, and keyboardist Katharine Gifford. A lot of gear, a lot of humans, but also a lot of blissful sound. Watch below.