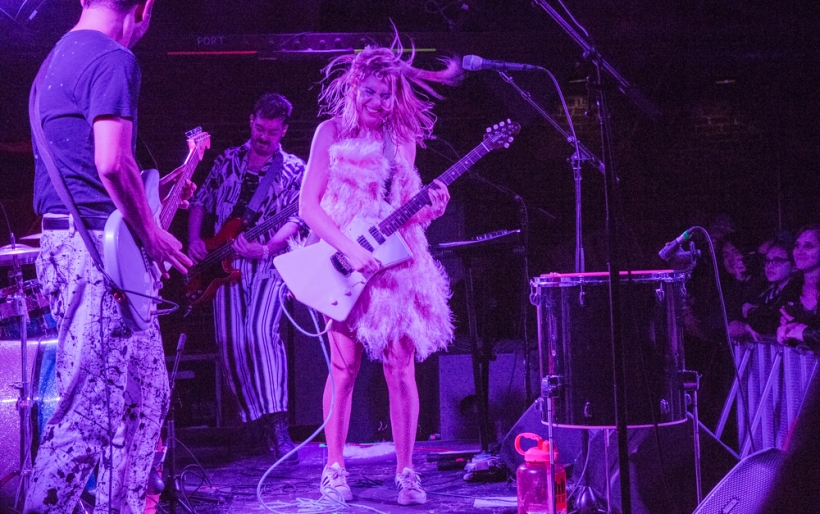 Two songs into their set at The Foundry last night, NYC indie pop / modern rock breakouts Charly Bliss was already playing “Hard to Believe” — an impossibly hooky standout from their stellar sophomore album Young Enough. This was after they’d opened with “Capacity,” a number that had frontperson Eva Hendricks leaping at the foot of the stage, guitarist Spencer Fox high-kicking on the refrain, the two going back-to-back-to-back with bassist Dan Shure, lifting their instrumenta aloft. The energy was unreal. Where do they go from here?

Then again, we’re talking about Charly Bliss. They have an entire catalog of songs like this.

The band used the Thursday night gig to showcase Young Enough, as well its recent companion EP, Supermoon, released last Friday on Barsuk Records. The new EP skews more midtempo and introspective as compared to the jump-up-and-get-down vibe on Young Enough; the first song we heard from it (the shuffling bop “Threat”) falls more in line with the pace and tone of the band’s great 2017’s debut Guppy. Does that mean that its somehow lesser, or toned-down? Hell no; the cathartic build on “Supermoon” in particular was breathtaking, and having that mixed with the highly singalongable “Camera,” the swift and synthy “Glitter” — not to mention the shut-down-the-show bangers “Chatroom” (which closed the main set) and “Percolator” (which capped the night) — made for a dynamic workout.

It was also clear that this wasn’t just another tour stop for Charly Bliss, despite being one of many stops on a long year of touring. After “The Truth,” Hendricks joked “We’re only six months late!” Originally slated for April, the Foundry gig had to be postponed due to a scheduling snafu, and though the band played a sick Made in America set in the interim, Hendricks apologized profusely for making Philly fans wait to see them headline. “Thank you for remembering that the show was still happening!”

The appreciation for the crowded and super hype room continued after the band played “Under You,” when Hendricks spoke about how 2019 has been one of the craziest years in the life of a band that has been making music for a decade at this point. The new album rips, it’s been remarkably well received, and constant road time has helped Charly Bliss’ audience grow bigger than ever.

“The first show we ever played in Philly was at The Fire,” Hendricks said. “True story: the only person in attendance was the person running sound. And he left halfway through the set. So this is a significant step up.” That sounds remarkably on-brand for The Fire, but nevertheless Charly Bliss persevered and connected with an ever-growing group of Philly fans, which she said are “always loyal, so supportive.”

That energy we saw at the top of the show perhaps dialed down on those midtempo moments, but never completely disappeared, and by the time the rager “Blown To Bits” appeared towards the end of the night, a blanket of feathers had fallen loose from Hendricks’ dress due to all the dancing, sprinting, slamming into her equally stylish bandmates (paint-splattered pants and angular pinstripe suits, oh my), coating the stage like a dusting of snow. Thankfully, Charly Bliss has a few days to catch their breath; after this weekend, they’re on to Canada, then Australia, then Singapore, then the rest of the world.

Check out photos and the setlist from last night below.